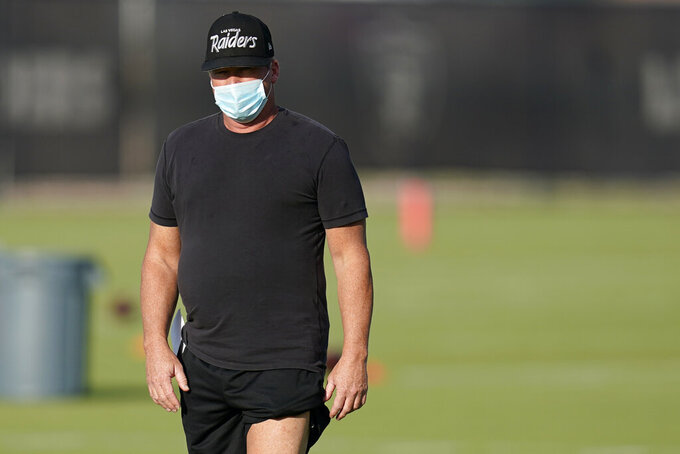 A roster overhaul left few proven pieces at his disposal and contributed to the Raiders ranking among the worst defenses in the NFL in almost every category.

Guenther hopes the changes made this past offseason will finally give him the talent necessary to have a competent defense.

“It used to be when we have one guy out with an injury, we bled to death,” Guenther said Thursday. “Now we have some depth across the board in the secondary, on the d-line, we can roll guys through and create roles for each and every guy. It may be 10 snaps to help us win, it may be 60 snaps to help us win, whatever it is, we have different guys and different portfolios. We can put those guys in certain spots and utilize their strengths. So, it’s exciting to actually get going and put the pads on.”

The Raiders had another overhaul on defense this offseason and figure to have at least five new starters led by versatile linebackers Cory Littleton and Nick Kwiatkoski, pass-rushing defensive tackle Maliek Collins, free safety Damarious Randall and either Prince Amukamara or rookie Damon Arnette at cornerback.

In all, the Raiders have no one left on the roster who started on the defense in Guenther’s first game with the team in 2018.

“We really rebuilt the engine here with some new, young talent,” he said. “Very excited with where they’re at. They’re doing a hell of a job picking up the system, the scheme and techniques of everything we’re doing.”

Change was definitely needed after the results of the past two seasons as the Raiders struggled to find a replacement for star pass rusher Khalil Mack and had a revolving door in the secondary.

In Guenther’s two seasons at the helm, the Raiders allowed the most points per drive (2.46), tied for second most yards per play allowed (6.08), have the fewest sacks (45) and tied for fewest takeaways (32). Perhaps the biggest indictment is the league-worst 11 TD drives of at least 90 yards during that time.

“A lot of times the last couple years, guys to be honest with you, you look down at your call sheet and say, ‘Well, I can’t put this guy in that situation,’ or ‘this guy in this situation.’ You have to pick and choose your spots during games,” Guenther said. “But I think, with the young talent that we have, the speed that we have, the first thing that I noticed is that we’re much faster on defense. We got some good rushers, we got some good cover guys. That’s what you need in this league to be successful.”

The biggest upgrades this season will come in the middle of the field where the Raiders hope they finally have the pieces needed to neutralize tight ends and backs in the passing game.

Littleton and Kwiatkoski give the Raiders their best pair of linebackers in more than a decade, and Johnathan Abram adds a physical presence at safety after going down with a season-ending shoulder injury in the opener of his rookie campaign in 2019.

Randall will be counted on to clean up any mistakes on the back end.

“That’s what the NFL is about, matchups, and to have as many versatile guys as you can to help match up with anything an offense gives is definitely a plus for us,” Randall said. “So, definitely happy to have Nick and Cory on the team. Cory is very, very athletic. Nick is smart and he’s the leader of the defense.”

“He’s officially about to enter the prime of his career,” Gruden said. “He’s got a lot of playing experience. He’s got a lot of technical knowledge of what we want done. He’s the key to our defense. I think he’s got a chance to be one of the better ones. We’re happy about that.”