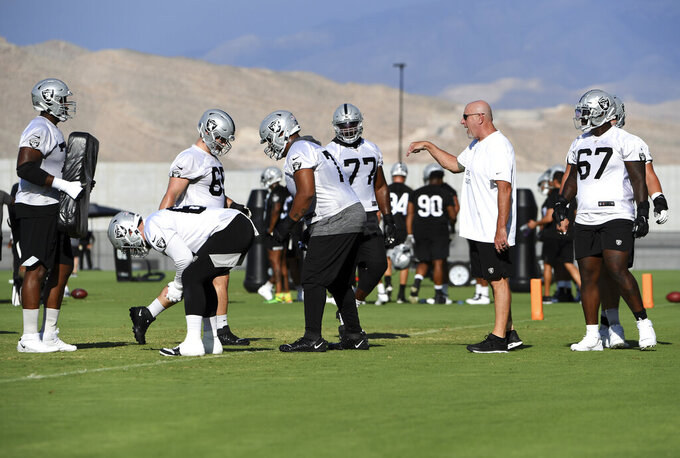 HENDERSON, Nev. (AP) — The Las Vegas Raiders’ surprising offseason overhaul of their offensive line left significant gaps up front, and assistant coach Tom Cable with plenty of work to do.

Gone are center Rodney Hudson, guard Gabe Jackson, and tackle Trent Brown, all of whom were traded in March.

In are Andre James, an understudy the past two seasons with the Raiders, and rookie Alex Leatherwood, the No. 17 overall pick in April.

Heading into Saturday’s preseason opener at home against Seattle, Cable said his unit has exceeded his hopes for the early part of camp, in part because the bulk of the linemen have been together for a couple of years and there's built-in chemistry.

“You have to find out the right number to play those guys so they’re together in games,” Cable said. “We’ll find out as we go forward what we think they need in terms of reps. Alex is really the one new piece to interject into it. The thing I’m most excited about is how they’ve all kind of gone to him, big brothers if you will. And he’s good that way. He loves to hear their input, he uses it. Sometimes, if you didn’t have good pieces, you’d probably be a little more anxious about (rebuilding) but I truly am excited about what I think they can do.”

Leatherwood has gotten plenty of reps with the starters the first few weeks, working opposite seasoned defensive end Yannick Ngakoue, while James continues to build chemistry with quarterback Derek Carr while anchoring the line.

“So far, they’ve been great,” Carr said. “They’ve been really good. They are going to get tested. Obviously, people are going to test our rookie out and they are going to try to do those things, but we’re all about competing and we’re all about the next play. So, obviously, he’s a rookie. Obviously, there’s some new guys. If they mess up one rep, they are so awesome that the next play they’ll go maul somebody, and that’s football, though. So, as long as we can keep that mentality and just keep getting better.”

The Raiders, who depend on a balanced offensive attack, were hurried 59 times last season, tied for ninth-most in the league; they also averaged just 1.8 yards rushing after contact per attempt last season.

Offensive coordinator Greg Olson said he is confident the offensive line will have established continuity by Week 1.

“We’re working hard,” guard Richie Incognito said. “Coach Cable is an awesome coach, one of the best offensive line coaches that I’ve played for. We’re just putting in the work every day, just getting better every single day, there’s always something to work on, always something to get better at, and you can feel that hunger from this group.”

NOTES: Gruden said quarterback Marcus Mariota’s availability for Saturday’s game is in doubt after the backup tweaked his leg in Sunday’s practice while running into the end zone for a touchdown on a zone-read option play. With Carr expected to sit for the preseason opener, Mariota’s absence would leave Nathan Peterman and Case Cookus to take the snaps against the Seahawks. Cookus was signed Tuesday to provide preseason depth. … Defensive end Clelin Ferrell left the practice field early, walking gingerly with a trainer while pointing to his left hip area. … Kicker Daniel Carlson, who is still on the COVID-19 reserve list, watched practice from the weight room, in pads, for a second straight time.