Raiders say distractions have nothing to do with emails 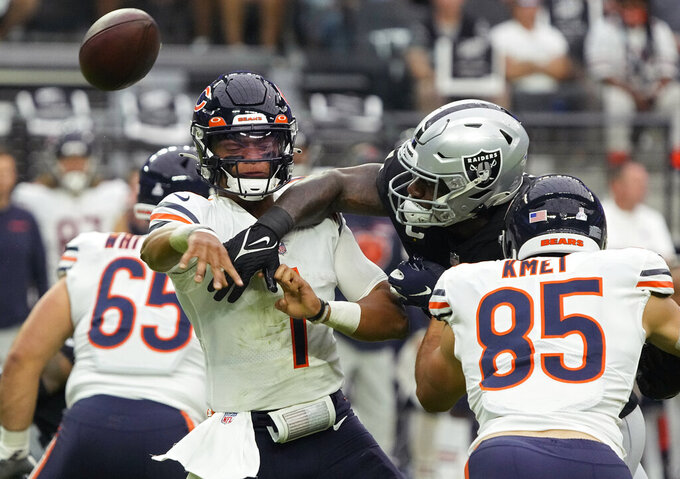 LAS VEGAS (AP) — The Las Vegas Raiders didn’t look like a team that started the season 3-0 as they muddled their way through a 20-9 loss to the Chicago Bears on Sunday.

Instead, they looked sloppy, undisciplined, fazed and distracted.

And the Raiders said that had nothing to do with decade-old emails.

Off-field distractions didn’t cause their lackluster performance in Monday’s 28-14 loss to the Los Angeles Chargers. Jon Gruden and his email comment 10 years ago about players union leader DeMaurice Smith had nothing to do with the Raiders being dominated at home by Chicago in front of an announced crowd of 59,122.

“The last couple of weeks, we’ve been coming out flat, starting off early in the game,” said running back Josh Jacobs, who ran for 48 yards and a touchdown on 15 carries. “It was kind of a point of emphasis to get it going early and we didn’t do that today.”

First-half issues have been a problem for the Raiders (3-2), even in their three victories. But in being overwhelmed and outplayed — and being handed their second loss in seven days — Las Vegas has to start addressing intangibles that have the team suddenly unraveling after a promising start to the campaign.

Gruden apologized for his “insensitive remarks” when asked about the emails that included a racial remark about Smith.

The veteran coach also said he wasn’t going to point to the front line for his offensive unit’s inept play – and then he did.

“Obviously we’re trying to find our right mix up front,” Gruden said. “We’re struggling to run the football and obviously our pass protection has to get better as well. We did drop some passes today that really hurt us.

“But the penalties — the penalties, they've got to stop. We got some on defense that allowed them to continue drives as well. It all falls back on me.”

Las Vegas was flagged six times for 48 yards in the first half Sunday and had two other holding penalties declined because there were others called on the same play. Their mediocre effort allowed the Bears to take a 14-3 lead into the locker room at halftime.

The Raiders, who have 40 penalties for 346 yards this season, finished with 10 on Sunday and have 17 in their last two games.

Fact is, there are offensive problems that have hampered the Raiders since Week 1 and have simply been magnified in the last two weeks. The Raiders tallied a combined 177 yards, seven first downs, and three points in the first half of play in both losses.

Defensive end Yannick Ngakoue said the defense can do its part by forcing a turnover to put quarterback Derek Carr and the offense in better field position.

“Three-and-outs are cool,” Ngakoue said, “but turnovers change the game.”

After producing three turnovers in the first two games, the Raiders have none in their last three.

“We've got to get some field position established,” Gruden said. “They’re playing hard, we’re doing some good things and there’s some individual efforts that are just outstanding. But it wasn’t enough today.”

Mix in an off-field controversy, revisit a banged-up and re-tooled offensive line that has yet to show improvement, and a terrible habit of sluggish starts, and the Raiders have to a lot to clean up before heading to Denver for a critical AFC West battle against the Broncos next Sunday.