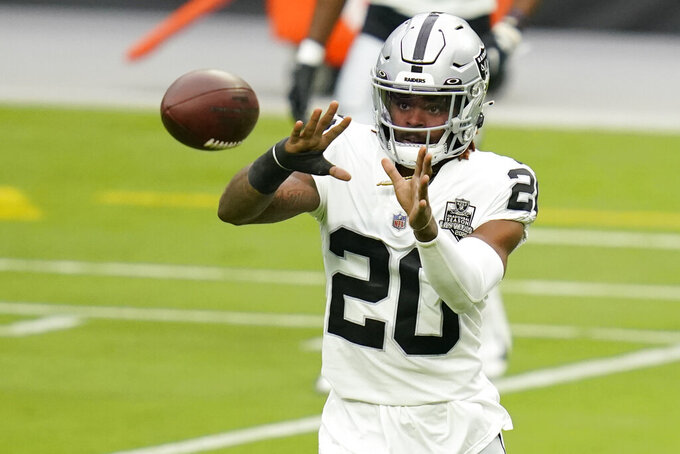 The Raiders have signed veteran free agents, found castoffs from other teams and used draft picks on cornerbacks.

But for more than a decade a position that was once a strength for an organization that featured lockdown cornerbacks over the years like Willie Brown, Lester Hayes, Mike Haynes, Charles Woodson and Nnamdi Asomugha has become a revolving door.

The Raiders are hoping that has finally come to a stop thanks to a pair of recent high draft picks.

Las Vegas will enter the 2020 season with 2019 second-round pick Trayvon Mullen at one outside cornerback spot and rookie first-rounder Damon Arnette at the other.

“I think they are two young corners that can cover,” defensive coordinator Paul Guenther said. “It’s an exciting time. It’s really how you want to do it, is bring young guys in without having bad habits, teaching your system, teach your techniques, your schemes and all those things. It’s exciting to have two young corners that can do that. So, hopefully they’ll be a tandem for years to come.”

That would be quite a change for an organization that hasn’t had a cornerback be a regular starter for three seasons in a row since Asomugha left as a free agent nearly a decade ago.

Having Mullen and Arnette fill the starting roles to start the season wasn’t always a sure thing this offseason. Las Vegas signed veteran Prince Amukamara as a free agent in May.

But with the two young players faring so well in training camp, the Raiders released Amukamara earlier this week and will embrace the youth movement.

“Keeping the best guys is all we’re doing,” coach Jon Gruden said. “Prince is a good player. I’m sure he’ll latch on with somebody, but we’re going to be young. I’ve been criticized for being too old. We’re going to keep the best players and try to continue to develop them. ... We’re hoping we have the makings of a good, young secondary that can be great someday. And they’re going to be tested we know that, but we didn’t draft these guys to stand on the sideline.”

Mullen got experience last year as a rookie, taking over as the starter when the Raiders traded 2017 first-round pick Gareon Conley to Houston in October.

Mullen was solid in his 10 starts, holding opponents to just a 50.9% completion rate and allowing only two TDs in coverage, according to SportsInfo Solutions.

That experience has only added to Mullen’s confidence heading into his second NFL season.

“I would say my level has grew tremendously, just being able to be comfortable and more confident in myself and being able to go through one year with a lot of experienced guys,” he said. “Just my mentality through the offseason, what I was grinding for and I knew what I wanted. I’m more comfortable than ever and I just have a different edge and a different mindset.”

Mullen also serves as a sounding board for Arnette, having just gone through the college-to-pro transition a year ago.

He’s impressed by what he sees from the player picked 19th overall back in April.

“I trust him tremendously because of the way he comes to practice, his edge, the way he plays, his energy level,” Mullen said. “He just has a lot of confidence in himself and that makes me have more confidence in him. He doesn’t doubt himself. If he makes a bad play, he’s going to come back and make an even better play. He just has a different edge.”

The cornerbacks aren’t the only young players projected to start in the secondary. Johnathan Abram, a first-round pick in 2019, is slated to start at strong safety after missing almost all of his rookie season with a shoulder injury suffered in the season opener.

Abram was impressive in training camp and the preseason last year with his energy and physical play making him a tone setter for the defense.

But that did him in when one of his big hits led to the shoulder injury that ended his rookie season after less than one game.

Abram said he’ll be smarter about that this season, knowing that he can’t contribute if he’s not healthy. He also used the time off to better understand the defense and Gruden has noticed a big difference in Abram’s ability to communicate what needs to be done to the rest of the defense.

“That’s been the biggest thing,” he said. “As far as communication, I understand it a lot more. I see things before they happen, so I just try to make sure everybody on the field know. No need to let people run into the blind when I know what’s going on.”