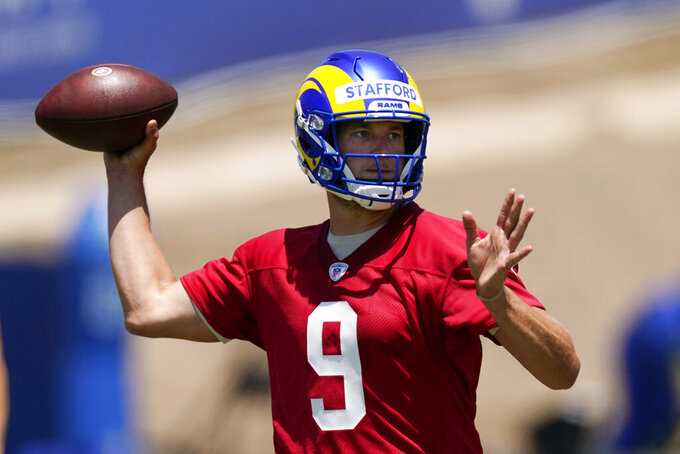 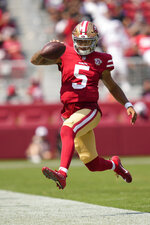 SANTA CLARA, Calif. (AP) — With trips to the Super Bowl still in their recent memories, the Los Angeles Rams and San Francisco 49ers made the decision this offseason that they needed more dynamic quarterback play to remain contenders in the long run.

It remains to be seen whether those bold risks will pay off, but it’s the decision at quarterback another NFC West team made that may end up determining which team wins what looks like the NFL’s most competitive division.

Despite reports that Russell Wilson wanted out of Seattle after nine seasons, the Seahawks opted mostly to stand pat and hope that a couple of tweaks would be enough for a repeat division title under coach Pete Carroll followed by some playoff success after too many early endings the past few years.

Winning the NFC West doesn’t figure to be easy as it is the only division where the projected win totals for all four teams equate to a .500 or better season.

The Rams made it to the Super Bowl in the 2018 season with Jared Goff at quarterback, but stagnated a bit the past few years, leading to the decision to acquire Stafford from Detroit.

The Niners made it there the following season only to be undone last year by a spate of injuries, including sprained ankles that limited quarterback Jimmy Garoppolo to six starts.

The Cardinals made their own splashy moves in the offseason to build a better roster around playmaking quarterback Kyler Murray, highlighted by the signing of former three-time AP Defensive Player of the Year J.J. Watt.

Wilson's frustration stemmed in part from the hits he has endured since entering the NFL with his 394 sacks the most of any player in his first nine seasons since the merger.

While some of that can be blamed on poor offensive line play, Wilson deserves his own share of the responsibility for his tendency to hold onto the ball longer than most quarterbacks out of a desire to make a big play.

The Seahawks got Wilson some help by trading for guard Gabe Jackson and hiring Shane Waldron as offensive coordinator to bring more quick passing and play action to the offense. But unless left tackle Duane Brown ends his “hold in” after not practicing for all of camp, there still could be issues.

Rams coach Sean McVay made the decision to move on from Goff despite handing him a big contract after he helped Los Angeles reach the Super Bowl in the 2018 season. The Rams dealt Goff, two first-round picks and a third-rounder to Detroit for Stafford, who has loads of talent but little team success in his first 12 seasons.

“Not many people in my position get the chance to move to teams that have had a bunch of recent success, and I’m just excited to be a part of it,” Stafford said.

The Rams are hoping that joining a more stable franchise will unleash Stafford and that Stafford's big arm will help unlock a more dynamic offense. Stafford threw the ball the third deepest in 2020, according to SportsInfo Solutions, while Goff had the third-shortest average depth of pass among qualifiers.

The other questions for the Rams come on defense where Raheem Morris replaces coordinator Brandon Staley and Aaron Donald and Jalen Ramsey will need to make up for losses in the secondary.

TWO QBS BETTER THAN ONE

The Niners are going to begin the season with plans to play both their quarterbacks with Lance having a package of plays to take advantage of his running ability and Garoppolo starting.

“It’s tough for defenses to handle that,” Garoppolo said. “I’ve never been in that situation, but just seeing it firsthand, it’s hard on them. So, whatever’s best for the team, I’m here for it.”

Shanahan believes the two-QB system gives his team the best chance to compete early, but at some point the Niners will likely shift to Lance as the starter considering they traded three first-round picks for him.

If Garoppolo can stay healthy and regain the efficiency that helped San Francisco reach the Super Bowl two years ago, that might not be until 2022.

Kliff Kingsbury was supposed to bring an innovative offense to Arizona when he was hired as coach in 2020. While there have been some flashes with Kyler Murray at quarterback, the Cardinals stagnated offensively last season.

This could be a make-or-break season for Kingsbury, who has the pieces on offense to contend led by Murray and DeAndre Hopkins.

But Arizona will need improved play at cornerback to contend in the NFL's toughest division.