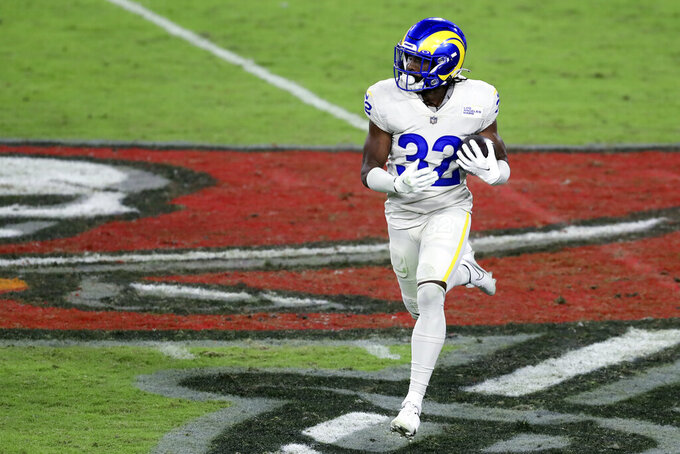 LOS ANGELES (AP) — The Los Angeles Rams celebrated their gritty win Monday night in Tampa Bay with style, going crazy in the locker room with a party so exuberant and so joyously profane that the team's social media pros decided they couldn't post the video.

The Rams (7-3) earned that good time in Tampa before their latest six-hour flight home. They look like a genuine Super Bowl contender as they head down the stretch of a season in which they weren't generally expected to be among the NFC's elites.

Los Angeles moved atop the NFC West and into the No. 2 spot in the conference's playoff race with that 27-24 road win over the Buccaneers. The Rams have returned from their bye week with back-to-back victories over fellow NFC contenders Seattle and Tampa Bay, staking their claim as a worthy opponent for New Orleans, Green Bay and the other conference powerhouses.

The Rams' success is remarkable because they've overcome everything from a sluggish offense to a string of five East Coast trips in 10 weeks. Although other top teams are more consistent with the ball in their hands, coach Sean McVay's team is figuring out ways to win — usually with defense.

When Brady and the Bucs took the field down by three points with 2:32 to play, the Rams won with one last stand from a defense that has been remarkable all season long under McVay's rookie coordinator, Brandon Staley.

“I wasn’t nervous,” McVay said of the final drive, which ended with Fuller's second pick. “I was more confident. Just seeing those guys come through in the clutch was big-time for our team. We’ll enjoy it. We’ve got a lot of things that we’ve got to continue to clean up in a short amount of time.”

Most of that cleanup work is needed on offense, where McVay's group isn't producing at the level of the Rams' past offenses.

The Rams are only 17th in the NFL in points per game (24.3), and they've scored more than 30 points only twice. They accomplished that feat nine times in McVay's rookie season in 2017, and they did it 11 times on the way to the Super Bowl in 2018. They even did it five times last season while going 9-7 and missing the playoffs.

Those numbers won't matter if the Rams keep relying on the defense and the clutch play that has put them in the thick of the Super Bowl chase.

Just about everything Staley's group does: The Rams are the NFL’s top defense by yards allowed, just 291.9 per game. They held Brady and the Bucs to 251 yards, including just 113 after halftime. Tampa Bay scored only the third touchdown allowed by LA's defense in the second half of its 10 games, but it was on a short field after Goff's second interception. One week after hounding Russell Wilson into a quiet performance, the Rams forced a season-high 22 incompletions by Brady and made everything difficult for the six-time Super Bowl champ.

The Rams didn't have a first-round pick last spring, and their rookie class hadn't made much of an impact this season beyond sixth-round safety Fuller's surprisingly large role. But in Tampa, receiver Van Jefferson and running back Cam Akers both scored their first touchdowns while Fuller made his first two interceptions. Jefferson and Akers are hoping for bigger responsibilities down the stretch.

The offense's execution in the second half was alarmingly bad. Goff threw two interceptions and said he made “some pretty dumb decisions,” while McVay made another handful of head-scratching play calls. Those mistakes and the Rams' nonexistent running game limited LA to 76 yards on its final six drives — 53 of those on the drive for the winning field goal.

LB Micah Kiser went out late with an apparent head injury, and TE Tyler Higbee played part of the second half with a protective device on his arm. McVay didn't disclose their conditions before the Rams' long flight home, and he didn't speak to the media Tuesday.

0 — The number of tackles in the past two games by Aaron Donald, who had been held without a tackle just once in his first 102 games. He's still making an impact, however: The All-Pro defensive tackle is drawing constant double- and triple-teams as usual, and Tampa Bay's Donovan Smith got away with a blatant hold on Donald in the end zone that should have resulted in a safety.

A potential revenge game against the San Francisco 49ers (4-6) at SoFi Stadium, where the Rams are still unbeaten. The Niners decisively beat LA 24-16 last month in Santa Clara, but have lost Jimmy Garoppolo since then.

By Wayne Parry an hour ago
By Tom Withers 3 hrs ago
By Josh Dubow 4 hrs ago
6 hrs ago
By Teresa M. Walker 8 hrs ago