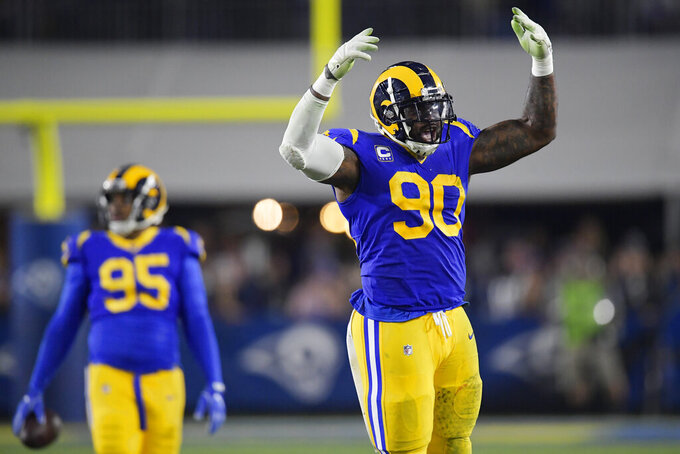 LOS ANGELES (AP) — C.J. Anderson rushed for 123 yards and two touchdowns, and Todd Gurley rushed for 115 more yards and another TD in the Los Angeles Rams' first playoff victory in 14 years, 30-22 over the Dallas Cowboys in the divisional round on Saturday night.

Gurley and Anderson punished the Cowboys' normally sturdy run defense and sent the second-seeded Rams (14-3) to the NFC championship game for the first time in 17 years. Los Angeles racked up a franchise playoff-record 273 yards on the ground — also the most ever allowed in the postseason by the Cowboys, who were playing in their NFL-record 63rd postseason game.

The long-struggling Rams had won only one postseason game since their last trip to the Super Bowl in February 2002, but 32-year-old coach Sean McVay has added his first playoff victory to his spectacular two-season franchise turnaround.

Ezekiel Elliott rushed for a TD and Amari Cooper caught an early TD pass for the Cowboys (11-7), who still haven't won a playoff game on the road in 26 years. After winning the NFC East and beating Seattle last week, Dallas lost in the divisional playoff round for the sixth consecutive time and fell short of its first trip to the NFC championship game since January 1996.

Next weekend, the Rams will face the winner of the other divisional playoff game in New Orleans between the top-seeded Saints and the defending Super Bowl champion Philadelphia Eagles.

The Rams are one win away from another Super Bowl trip after McVay's high-flying, inventive offense largely kept it on the ground, methodically punishing the Cowboys' normally sturdy run defense with their unlikely running back tandem.

Dak Prescott passed for 266 yards and rushed for a TD with 2:11 to play, but the Cowboys couldn't climb out after falling into a 23-7 hole midway through the third quarter. Elliott managed just 47 yards on 20 carries as Dallas lost for just the second time in its last 10 games.

Jared Goff passed for 186 yards and spent much of the night handing off, but the gangly quarterback improbably scrambled 11 yards for a first down with 1:51 to play, essentially wrapping up his first playoff victory.

KANSAS CITY, Mo. (AP) — Patrick Mahomes picked apart the Colts in his postseason debut, the Chiefs defense answered their chorus of critics with a stout performance, and Kansas City rolled to a victory over Indianapolis in the divisional round to end 25 years of playoff frustration.

Mahomes threw for 278 yards while running for a touchdown, and Damien Williams ran through snow and muck for 129 yards and another score, as the Chiefs beat Indianapolis for the first time in five playoff meetings to earn their first AFC title game appearance since January 1994.

The AFC West champions will play the winner of Sunday's game between the division-rival Los Angeles Chargers and the New England Patriots next weekend for a spot in the Super Bowl in Atlanta.

Andrew Luck was held to 203 yards passing for the Colts (11-7), while Marlon Mack was a non-factor on the ground. He had 46 yards rushing before leaving late in the fourth quarter with a hip injury.

With persistent snow turning Arrowhead Stadium into a winter wonderland, the Chiefs (13-4) waltzed all over a Colts defense that nearly shut out the Texans a week ago. Mahomes and Co. scored on their first three possessions , then again just before halftime, to take a 24-7 lead into the break.

If there was any question whether this would be Kansas City's day, it was answered when Colts kicker Adam Vinatieri missed a 23-yard field-goal try off the upright just before halftime. It was the first time in 22 postseason attempts that he'd missed from that close.