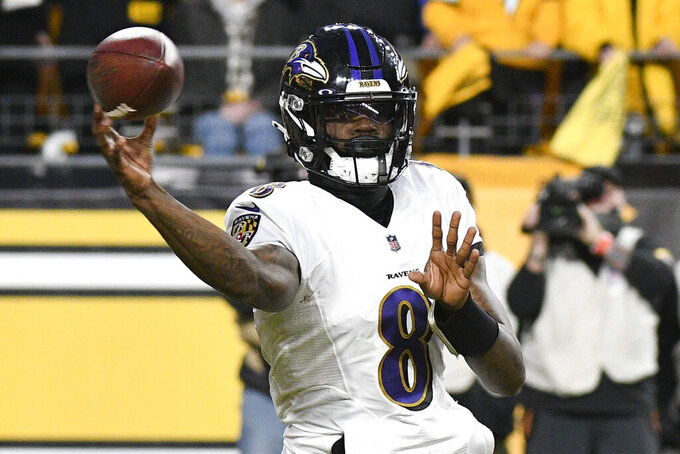 Baltimore Ravens quarterback Lamar Jackson (8) passes against the Pittsburgh Steelers during the first half of an NFL football game, Sunday, Dec. 5, 2021, in Pittsburgh. (AP Photo/Don Wright)

BETTING LINE: Browns by 2 1/2, according to FanDuel Sportsbook.

TURNOVER DIFFERENTIAL: Ravens minus-8; Browns plus-1.

RAVENS PLAYER TO WATCH: WR Rashod Bateman. The first-round draft pick started his rookie season late because of injury problems, but he was making solid contributions (25 catches, 301 yards) until last weekend, when he was held without a catch against Pittsburgh.

BROWNS PLAYER TO WATCH: RB Nick Chubb. One of the NFL's best backs was held to just 16 yards on eight carries two weeks ago as the Ravens stuffed the line of scrimmage with extra defenders. Look for Cleveland to find other ways to get the ball to Chubb.

KEY MATCHUP: Ravens LT Alejandro Villanueva vs. Browns DE Myles Garrett. Teams have found success when they get pressure on hard-to-catch Ravens quarterback Lamar Jackson, who was dropped seven times last week by the Steelers. Garrett only got him once when the teams met two weeks ago, but was close several times and wants to catch Steelers LB T.J. Watt for the league lead.

KEY INJURIES: Baltimore was hit by another significant injury when CB Marlon Humphrey went down with a season-ending pectoral injury. That was another blow for a team that has faced adversity ever since RBs J.K. Dobbins and Gus Edwards and CB Marcus Peters were lost to season-ending injuries during the preseason. ... Browns starting rookie CB Greg Newsome II will miss the game after suffering a concussion on the last play of practice on Friday. ... The Browns will also be without starting TE David Njoku, LB Anthony Walker Jr. and P Jamie Gillan due to positive COVID-19 tests this week. Njoku leads the team in yards receiving (407) and scored Cleveland's only touchdown in the first matchup with Baltimore. Walker is the club's leading tackler and defensive signal caller. ... The Browns signed veteran punter Dustin Colquitt to replace Gillan. A two-time Pro Bowler, Colquitt sent 15 seasons with Kansas City. WR Jarvis Landry (knee) missed practice time but should be good to go.

SERIES NOTES: A scheduling quirk matches up the AFC North rivals for the second time in three weeks. ... Ravens coach John Harbaugh is 23-4 against Cleveland, including 11-2 at FirstEnergy Stadium. Since 1950, only Hall of Fame coach Chuck Noll (25-21) has more victories against the Browns. ... Baltimore has won four straight and 11 of 14 against Cleveland since 2014. ... This is the first time Cleveland has faced the same opponent in consecutive games in the regular season since 1957, when the Browns split a pair with the Philadelphia Eagles.

STATS AND STUFF: Baltimore has been held under 20 points in five of its last six games, going 3-3 in that span after a 5-1 start. ... Baltimore ranks No. 1 in the NFL in time of possession at 34:15 per game. ... Ravens WR Marquise Brown is trying for his sixth straight game with at least five catches. ... Baltimore is 6-2 in game decided by six points or fewer. ... Mark Andrews needs 45 yards receiving to set a Ravens single-season record for a tight end. Todd Heap, with 855 in 2005, holds the current mark. ... Jackson has 47 consecutive games with a rushing or passing touchdown. Drew Brees holds the record since the 1970 merger with 54. ... The Ravens' 14-3 record in December since 2018 is the NFL's best mark for the month. ... Ravens K Justin Tucker has connected on 56 straight field goals in the fourth quarter and overtime. He made a 55-yarder with 2 seconds left in Baltimore's wild 47-42 win in Cleveland last year. The Ravens added a safety on the ensuing kickoff. ... The Browns come in 11th in the AFC playoff standings and can't afford another loss with a tough schedule ahead. ... Cleveland hasn't been to the postseason in consecutive seasons since 1988-89. ... Scoring has been an issue all season. The Browns haven't scored more than 17 points in six of the past seven games. ... The Browns were held to a season-low 40 yards rushing by the Ravens two weeks ago. ... Browns QB Baker Mayfield is 2-5 in his career against the Ravens. The last loss was the first time he didn't throw an interception against them. ... The Browns still lost despite intercepting Jackson four times in the first meeting. ... Garrett enters with 14 sacks, tying him with Reggie Camp (1984) for the single-season team record. Garrett's 56 1/2 career sacks trail only Clay Matthews' 62 1/2 in franchise history. ... Garrett's 28 quarterback hits lead the league. ... Seven of Browns CB Denzel Ward's 10 career interceptions have come against AFC North teams. ... The Browns are expected to make a personnel change on the offensive line with rookie James Hudson replacing Blake Hance at right tackle. ...

FANTASY TIP: Browns WR Jarvis Landry has caught at least five passes in nine straight games against the Ravens. He had six receptions for 111 yards in the first matchup.