Ravens expected to roll over lowly Lions in the Motor city 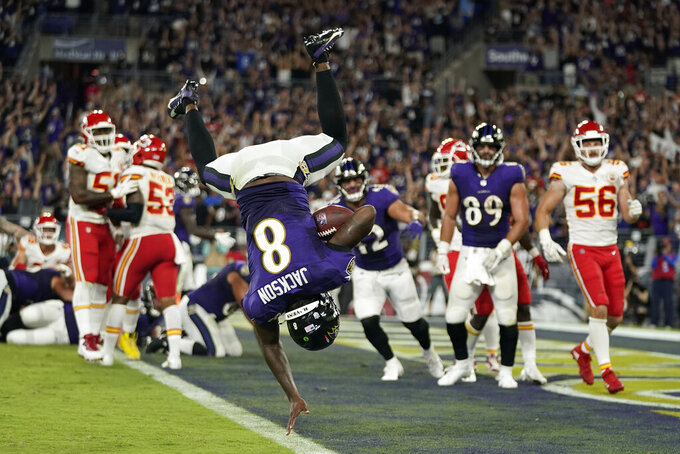 Baltimore Ravens quarterback Lamar Jackson scores a touchdown in the second half of an NFL football game against the Kansas City Chiefs, Sunday, Sept. 19, 2021, in Baltimore. (AP Photo/Julio Cortez) 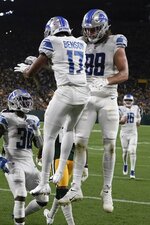 OPENING LINE: Ravens by 9, according to FanDuel SportsBook.

TURNOVER DIFFERENTIAL: Ravens minus-1; Lions minus-1.

RAVENS PLAYER TO WATCH: Rookie LB Odafe Oweh is making an instant impact. He had a sack in his debut in Week 1. To help Baltimore beat Kansas City on Sunday night, Oweh forced and recovered a fumble. The Ravens drafted him No. 31 overall from Penn State.

LIONS PLAYER TO WATCH: TE T.J. Hockenson is Detroit’s best option in the passing game and teams still can’t shut him down. He had an NFL-high 16 receptions through two games. Hockenson has a chance to be the first tight end in league history to catch eight-plus passes and have a touchdown reception in each of the first three games in a season.

KEY MATCHUPS: Baltimore's running game vs. Detroit's front seven. QB Lamar Jackson along with RBs Ty'Son Williams and Latavius Murray have helped Baltimore run for an NFL-high 440 yards, 116 more than the second-ranked rushing team. The Lions have allowed 227 yards rushing, ranking in the middle of the pack.

KEY INJURIES: Both teams have been hit hard by injuries at cornerback. Ravens CB Marcus Peters (knee) is out for the season and Jimmy Smith (ankle) missed the first two games. The Lions lost Jeff Okudah (Achilles tendon) in Week 1 and Ifeatu Melifonwu (thigh) in Week 2.

SERIES NOTES: The Ravens have won three straight since Detroit’s only win in the series, a 35-17 victory at home in 2015. ... Baltimore beat the Lions 48-3 at home in 2009, tying what was the team’s scoring record in a game. ... Justin Tucker's 61-yard field goal helped the Ravens beat Detroit in 2013 in their last visit to Ford Field.

STATS AND STUFF: The Ravens have won 10 straight games against NFC opponents — leading all active streaks against the conference — since losing at Atlanta in Week 13 of the 2018 season. ... Baltimore has rushed for at least 100 yards in 41 straight games, two shy of the NFL record set by Pittsburgh from 1974-77. ... The Ravens have scored at least 14 points in 45 consecutive games. ... Baltimore has allowed 448 yards per game this season, ranking ahead of only Kansas City. ... Jackson had a passing and rushing TD in a game for the 10th time and he has a total of 89 scores in 39 career starts. ... RB Williams had a career-high 77 yards rushing against the Chiefs. ... WR Marquise Brown and Green Bay's Davante Adams lead the league with eight receiving TDs since Week 12 of last season. ... Detroit started the season with an NFL-high 15 rookies and first-year players on the roster. ... QB Jared Goff has completed 69% of his passes for 584 yards and five TDs. He also has thrown two INTs, including a pivotal pick-six against the 49ers, and fumbled a snap against the Packers. ... Hockenson is one of three NFL TEs to have eight or more catches and a TD reception in each of his first two games of a season. Ben Coates was the first to pull off the feat in 1994 with New England, and Baltimore's Mark Andrews did it two years ago. ... LB Alex Anzalone, in his fifth NFL season, had a career-high 10 tackles against the Packers. ... Rookie LB Derrick Barnes is expected to play an increased role for Detroit. ... The Lions have given up an average of 38 points and only Atlanta has given up more points in the league.

FANTASY TIP: Lions WR Quintez Cephus is worth a flyer. The second-year pro matched his career high with 63 yards receiving on Monday night and caught a TD pass for the third straight game, dating to last season's finale.