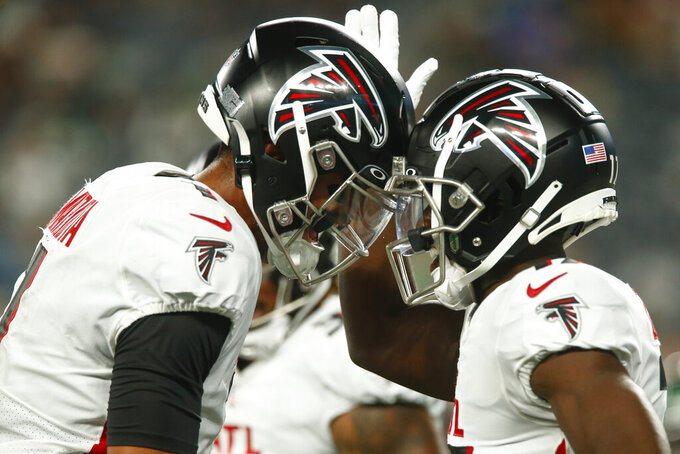 Strengths: TE Kyle Pitts had a dynamic rookie season, leading the team with 68 catches for 1,026 yards and earning a spot in the Pro Bowl. CB A.J. Terrell is a lockdown defender who should pair well with newcomer Hayward. RB-WR-KR Cordarrelle Patterson is one of the league's most versatile players, giving the Falcons big contributions as both a runner and pass catcher. K Younghoe Koo missed only two of 29 field-goal attempts in 2021 and made all 30 of his extra points.

Weaknesses: Where to start? The defense gave up more points than all but two teams in the NFL, and no team had fewer sacks than the Falcons' measly total of 18. Mariota is a huge question mark at quarterback. He hasn't come close to living up to expectations as the No. 2 overall pick in 2015 and will be starting for the first time in three years. Beyond first-round pick Drake London, the wideouts are a bunch of no-names. Ryan took quite a beating the past few years behind a porous offensive line.

Camp Development: CB Dee Alford has made some splashy plays in practice and helped his cause even more with an interception and eight tackles in Atlanta's first preseason game. Alford took an unconventional route to the Falcons, playing at Division II Tusculum and in the Canadian Football League. He signed a futures contract with Atlanta after helping lead the Winnipeg Blue Bombers to the Grey Cup title last season.

Fantasy Player To Watch: Patterson led the Falcons in rushing, ranked third in receptions and handled kickoff return duties. He scored a total of 11 touchdowns.

Expectations: Not much. The Falcons are taking a huge salary cap hit this season after trading Julio Jones last summer and dealing Ryan to the Indianapolis Colts in March. While no one in the organization will publicly use the word “rebuilding,” that's just what they're doing. Many Atlanta fans are eager for another poor season so the Falcons will have a shot at drafting their future franchise quarterback in 2023, when the class will likely be led by Alabama's Bryce Young and Ohio State's C.J. Stroud.