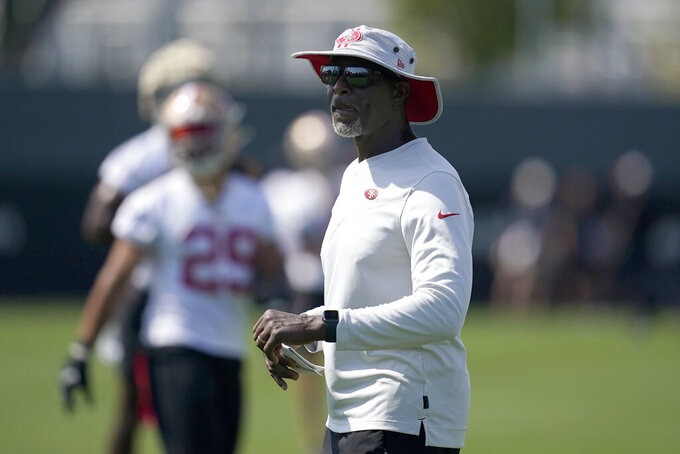 SANTA CLARA, Calif. (AP) — When the San Francisco 49ers gathered to start training camp with conditioning tests, there was one assistant coach happier than anyone else to be back on the field.

As his linebackers went through the drills, Johnny Holland watched closely and documented the day as he was pleased to be back coaching day to day after stepping away last season to undergo cancer treatment.

“He’s like a granddad,” fourth-year linebacker Azeez Al-Shaair said. “He was out there for our conditioning test and he was already out there taking pictures. This is literally like a grandpa who’s just taking in the moment at the family cookout. It’s awesome having him back.”

Holland's return to his full-time job has been one of the happier developments for the 49ers so far this year. He has always been one of the team's more popular assistants based on the close relationship he has forged with his players.

Al-Shaair remembers his first summer with the team in 2019 when he stayed in the Bay Area after being signed as an undrafted free agent to rehab a knee injury from college.

Al-Shaair didn't even have a car but would frequently bike from his hotel to Holland's house, building a relationship.

“We would hang out on the weekends when there wasn’t practice,” Al-Shaair remembered. “Me and Johnny were really close since I was young as a rookie, so not having him last year really hurt. We talked all the time. After the games he would be texting me and stuff. But having him in the room is awesome.”

Holland was first diagnosed with multiple myeloma in September 2019 but managed to coach through the season and help the Niners reach the Super Bowl.

Holland had several rounds of remission and relapse before he was forced to leave the team last summer to undergo experimental treatment at the University of California at San Francisco.

Holland was in the hospital for about a month and stepped away from his day-to-day job for the entire season, although he would still show up at the team's facility when he could, take part in Zoom meetings and give detailed reports to his linebackers after every game.

Now he's back to being a daily presence on the field and in the meeting room.

“That’s our guy,” linebacker Fred Warner said. “I think he’s the best linebacker coaching in the entire league. ... As a coach, you got to be able to teach first. You can yell and scream at guys all you want. But when you have a great teacher, somebody who’s been through it, has all that experience and is able to kind of give us that experience, teaching us, loving us, letting us know that we are the best, we're going to be able to perform at our best.”

The 57-year-old Holland has been public about his fight with cancer in hopes of being an inspiration for families going through similar travails.

“It’s a difficult deal to go through and it’s a shock probably for families when people hear that word, cancer,” Holland said. “It’s one of those deals where if you hadn’t been through it, it’s hard to explain. I’ve learned so much going through this. The strength that you have, the encouragement of positive people being around you, the difference it makes and thinking about your future. ... There’s a lot of other people that are going through the same battle. I just want to be in a position to help.”

Holland has spent more than three decades in the NFL, starting as a linebacker in Green Bay in 1987 and then as a coach for the Packers, Seahawks, Lions, Texans, Raiders, Browns and 49ers.

Holland was hired for coach Kyle Shanahan's initial staff in San Francisco in 2017 and is extremely close to defensive coordinator DeMeco Ryans, who played for Holland early in his career in Houston and calls him a “father figure” who taught him about football, family and life skills.

“Johnny is very special to me," Ryans said. "It’s good to see what he’s went through and the people that he’s able to impact from his story, that’s even more powerful to me for Johnny. I’m excited to see him back and he’s just always positive, always has a smile on his face, always uplifting, always bringing great energy to any room he steps in, so I’m excited to have him back for sure.”