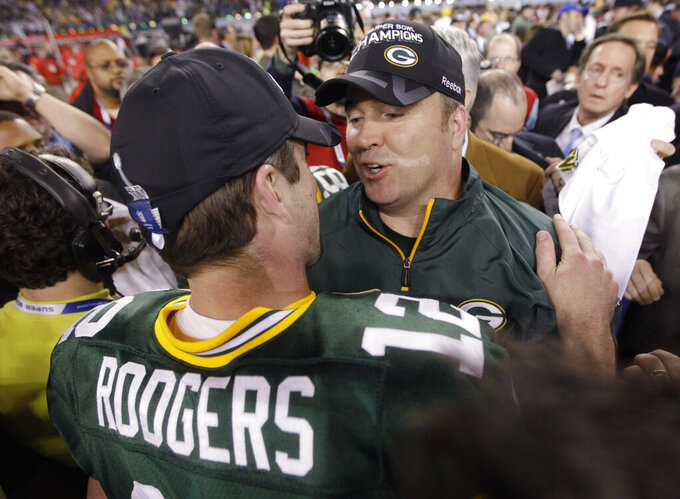 GREEN BAY, Wis. (AP) — Green Bay Packers quarterback Aaron Rodgers says the passage of time has given him a greater appreciation of the seasons he spent playing for Mike McCarthy.

McCarthy, now with the Dallas Cowboys, will return to Lambeau Field on Sunday to face the team he coached to a 125-77-2 record from 2006-18.

“It’s probably normal in any relationship you have,” Rodgers said Wednesday. “When you’re able to take time away and you have that separation, it’s natural to look back and have a greater sense of appreciation and gratitude and thankfulness for that time.”

McCarthy coached Green Bay during the 2010 season when the Packers won their lone Super Bowl title during Rodgers’ playing career, but the relationship between the quarterback and coach eventually soured. McCarthy was fired late in the 2018 season.

Four years later, McCarthy is returning to Lambeau Field as the coach of the surging Dallas Cowboys (6-2) while the Packers (3-6) are on their first five-game skid since 2008.

If any hard feelings remain between McCarthy and Rodgers, they certainly aren’t letting it show. They’ve spent this week exchanging compliments.

“When I think of him, I think of the one-on-one conversations we used to have, especially in the younger days,” McCarthy said. “And it always ended with a hug and, ‘I love ya.’ So that’s what I think about our relationship. I think he made me a much better coach. You’re talking about a man that’s one of the premier professional athletes of his generation.”

Rodgers recalled those meetings as well during his weekly news conference. He said the two of them started meeting every Thursday after practice around 2009 or 2010.

“Those were always fun,” Rodgers said. “Those could go 30 minutes or four hours. You’d start getting to story time. It just bonded us over the years, those conversations. I always appreciated that.”

McCarthy and Rodgers helped the Packers win a Super Bowl as the sixth and final seed in the NFC playoffs during that 2010 season. Rodgers won MVP awards while playing for McCarthy in 2011 and 2014.

During those latter seasons, Rodgers’ displeasure was occasionally apparent, whether he was occasionally criticizing the offense or complaining that he wasn’t consulted before the 2018 firing of quarterbacks coach Alex Van Pelt.

McCarthy said many of the issues between them could have stemmed from the generation gap. And the different ways in which they communicated. McCarthy turns 59 on Thursday, while Rodgers’ 39th birthday is Dec. 2.

“I think personal relationships are private, and you have to remember I was born in the 60s,” McCarthy said. “I’m being better at expressing myself publicly.”

Rodgers isn’t exactly heading into this reunion with momentum.

The Packers desperately need a victory and Rodgers is still dealing with an injured right thumb that kept him from practicing on Wednesday, which has happened four of the past five weeks. Rodgers says he expects to practice Thursday.

Perhaps the matchup with McCarthy’s team will help him bounce back, even though they apparently have patched up any differences they might have had at one time. Rodgers said they’d always stayed in touch, but have communicated a little more in the past year or so.

“I think as time goes by, the gratitude for that time as you look back on the journey of your career goes up a little bit,” Rodgers said. “I appreciate the little things a little bit more because really this game and life is about the journey. I’ll always be tied with him because of the connection that we had and the years we spent together.