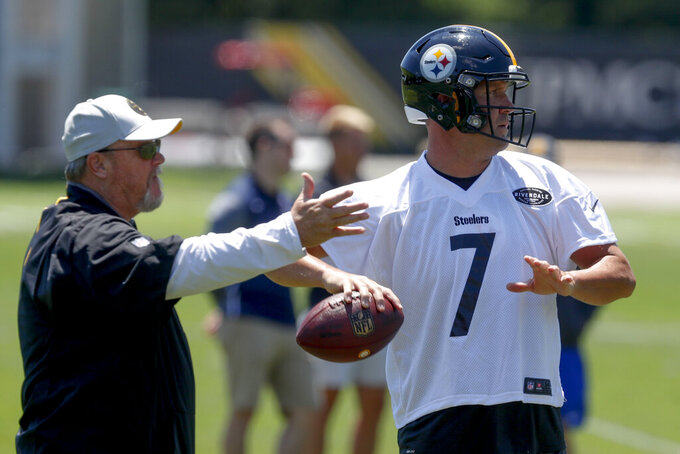 FILE - In this June 11, 2019, file photo, Pittsburgh Steelers quarterback Ben Roethlisberger (7) throws as offensive coordinator Randy Fichtner watches during NFL football practice in Pittsburgh. Fichtner has a message for players who think everything will be easy now that star quarterback Ben Roethlisberger has returned from an elbow injury that limited him to two games in 2019. "Don’t think that maybe I can take a deep breath and say, “Ah, Ben’s back,'" Fichtner said Wednesday. "That’s not the case. That’s not going to be the charge." (AP Photo/Keith Srakocic, File)

PITTSBURGH (AP) — Ben Roethlisberger is back and, to listen to the precious few who have seen the Pittsburgh Steelers quarterback throw a football sometime in the past 10 months tell it, apparently as good as new.

Even at 38. Even with a surgically repaired right elbow.

The two-time Super Bowl winner's presence alone during the opening days of training camp has given the Steelers a boost.

Yet offensive coordinator Randy Fichtner has a message to the players who think they can relax with Roethlisberger back for a 17th season: If you're thinking it's time to relax, think again.

“Don’t think that maybe I can take a deep breath and say, ‘Ah, Ben’s back,'” Fichtner said Wednesday. “That’s not the case. That’s not going to be the charge."

If anything, it's the opposite.

Last fall gave the franchise a glimpse into what the post-Roethlisberger era might look like after he left at halftime of Week 2 with his right elbow in shreds.

The view without him wasn't pretty. Shuttling between Mason Rudolph and undrafted rookie free agent Devlin “Duck” Hodges, the Steelers finished 8-8 as the offense posted the franchise's worst statistical season in three decades.

The high-profile offseason moves — namely signing free agent tight end Eric Ebron and drafting 6-foot-4 wide receiver Chase Claypool in the second round — sent a very clear message that the goal is to take advantage of whatever window remains on Roethlisberger's remarkable career.

That will require a significant step forward for a running game that struggled against defenses stacked to stop it with Roethlisberger out. It will also require a group to find a way to develop chemistry while still maintaining the NFL's health protocols in the wake of the COVID-19 pandemic.

So yeah, there's a lot to accomplish between now and when the 2020 season is scheduled to begin on Sept. 14 against the New York Giants.

“I know it is a limited amount of time,” Fichtner said. “It is basically a walk-through (for the next few weeks). It is still getting to know guys, being able to evaluate what they can handle mentally. We tried to force and throw a lot at these guys. We will be doing the same thing with new guys. Between (Eric) Ebron and some of the guys, we have to hit the ground running and see how they fit.”

The team plans to stick to the training camp throwing regiment that has worked for Roethlisberger in recent years, giving him plenty of down time to rest the elbow that cut short his 2019 season. Not that Roethlisberger is on board with the idea.

“There are times where he wants it all and we have to back him off and that is a good thing,” Fichtner said.

Fichtner believes Roethlisberger's experience, particularly in the red zone, is the single reason for optimism. The Steelers finished 27th in the league in scoring (18.1 points per game). They remained in the playoff chase until late thanks to a defense that led the league in sacks and takeaways. That unit figures to be among the NFL's best once again. An extra touchdown here or there by the offense could go a long way.

So will the potential combination of Ebron and tight end Vance McDonald. Both can excel at blocking and receiving and their size (both are 6-4) gives Roethlisberger more options at his disposal.

Provided, of course, that both are healthy. That hasn't been the case lately for either player. McDonald has dealt with concussions in the past while Ebron's 2019 season was cut short with ankle surgery. Fichtner is aware of the fine line both must walk to do their jobs effectively.

“You have to play it somewhat like a race car,” Fichtner said. “But you have to be able to be a Ford truck, too. They play in a world that is very physical and their availability will allow us to utilize two tight ends, if not more, and that will be awesome.”

NOTES: The Steelers placed second-year CB Justin Layne on the reserve/COVID-19 list Wednesday. Layne, a third-round pick in 2019, spent most of last season working exclusively on special teams. Layne is the second player to go on the COVID-19 list, joining cornerback Arrion Springs, whom the team signed out of the now-defunct XFL.