Run Down: Eagles' ground game obsolete in 28-22 loss to Bucs 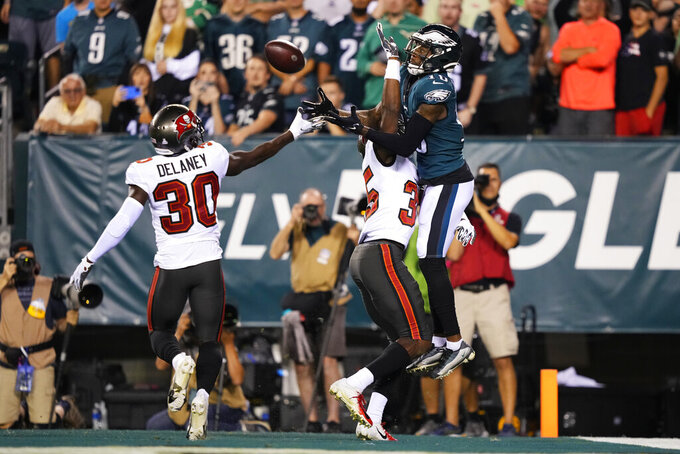 Philadelphia Eagles wide receiver Quez Watkins (16) can't catch a pass during the second half of an NFL football game against the Tampa Bay Buccaneers on Thursday, Oct. 14, 2021, in Philadelphia. (AP Photo/Matt Slocum)

PHILADELPHIA (AP) — The loudest ovation of the game from Eagles fans came on a routine 5-yard run by Miles Sanders.

Oh, the fans in their green jerseys stood and cheered, sarcastic ones directed at coach Nick Sirianni for calling only the third running play of the game and with Philadelphia trailing by 21 points late in the third quarter.

Sirianni has ignored the run game in his first season — so much so that Sanders, an 867-yard rushing, six-touchdown featured back last season — has been about as vital to the offense this year as those biting fans.

Maybe it’s time for Sirianni to mix up his offense.

“We have to be able to get them touches in there,” Sirianni said.

Leaning almost exclusively on Jalen Hurts, the Eagles failed to generate much offense until too late and lost 28-22 to Tom Brady and the Tampa Bay Buccaneers on Thursday night.

Consider, when Leonard Fournette scored on a 1-yard run early in the third for a 28-7 lead, the Buccaneers wrapped a 79-yard scoring drive. A that point, the Eagles had 77 total yards.

Sanders and Kenneth Gainwell had only 69 carries over the first five games. The duo ran the ball on just 22.5% of Philadelphia’s offensive plays. Hurts had 43 rushes himself. Some were scrambles but many are designed runs or run-pass options.

Sanders finished with 56 yards and Hurts had 44 for all the carries and yard rushing. The numbers didn’t get any better against Tampa Bay. Sanders had five carries through three quarters, Gainwell none.

“We're trying to call the best play for us in that particular time,” Sirianni said. “We had called runs today. They weren't real great for us. That's why we went for a little more RPOs.”

Sanders ran for 50 yards in the fourth quarter and got the offense, against the league's top rushing defense, finally moving. Hurts didn't have much of an answer on why Sanders — with one carry in the first half — was used sporadically until the fourth.

“Big time player for us. It’s kind of going the way it’s going,” Hurts said. “We saw the production later on in the game. ”

Philly fans were still cheering Sanders for his small rush when he got the ball again on the next play — and lost 2 yards. The Eagles had 99 yards of total offense over the first three quarters. As for Brady, well, the seven-time Super Bowl champion went 11 for 12 for 121 yards and two touchdowns in the first quarter alone.

It was that kind of game for the Eagles.

The Eagles gave up points on the first drive of the game for the fifth time in six games. Jake Elliott missed a 46-yard field goal when the Eagles still had a pulse. The Eagles stopped Tampa Bay on a drive in the second quarter (a potential interception was overturned on review) and forced the Buccaneers to punt — and Hurts gave it right back when an underthrown ball was intercepted by Jamel Dean.

Hurts, though, kept the Eagles in the game with his legs and his 1-yard run and 2-point conversion toss late in the fourth made it 28-22.

“We're always going to be thinking about how do we get him to be the passer first,” Sirianni said. “The secondary part is to be the runner.”

Against Brady and the Super Bowl champs, it's not enough. Brady finished 34 of 42 for 297 yards, two touchdowns and an interception.

“When it came down to clutch time, money time, we ran out of time,” Hurts said.

Sirianni has yet to win a home game in three tries and with straight road games ahead, he won’t get another chance until Nov. 7 against the Chargers.

At this rate, by the time the Eagles come home, their season could be about over.

By Arnie Stapleton an hour ago
By W.g. Ramirez 4 hrs ago
By Brett Martel 5 hrs ago
By Dan Greenspan 6 hrs ago
6 hrs ago