Russell Wilson off to a slow start, but Niners see same QB 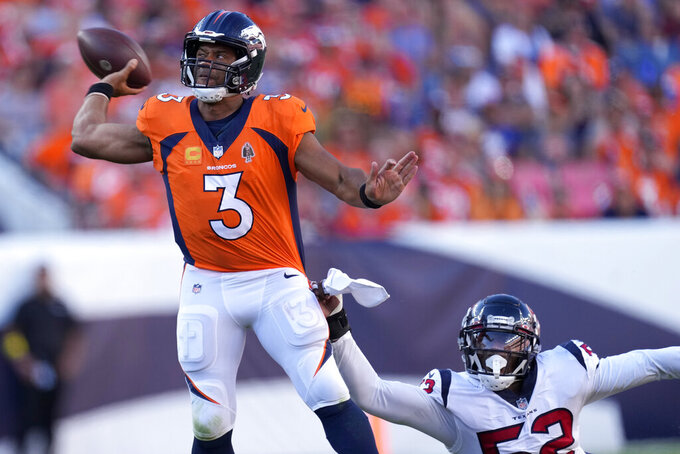 DENVER (AP) — The only difference the San Francisco 49ers see in longtime nemesis Russell Wilson isn't in his game but his gear.

“It’s so weird seeing him in a new uniform,” linebacker Azeez Al-Shaair said. “But he’s the same exact guy.”

Kyle Shanahan thinks so, too.

“I see the same stuff I've seen going against him in Seattle for the last 10 years. (It's just that) they've just come up short on a couple of touchdowns there,” said San Francisco's coach, who brings a 2-8 record against Wilson into Sunday night's showdown between the 49ers (1-1) and Broncos (1-1).

Shanahan pointed to Wilson's 35-yard fourth-quarter dart to Courtland Sutton on third-and-16 last week as evidence the 33-year-old QB still has it.

“There's no way you should be able to move the chains there,” Shanahan said. “But he moves the safety and goes down the sideline and then two plays later he hits the tight end for the touchdown.”

That rallied the Broncos past the Texans as Wilson overcame a 6-for-20 start in his home debut, which only reinforced Shanahan's view that Wilson is just starting to settle in with his new team.

“No matter how long you hold Russell and contain him, he always finds a way to make some plays,” Shanahan said. “I can't tell you how many times you go against him and nothing's happening and then all of a sudden they score 21 points just like that.

“That's what I felt he was extremely close to showing these last two weeks.”

Wilson has just two TD passes so far as he's been victimized by an overwhelmed play caller in rookie head coach Nathaniel Hackett along with too many dropped passes, a rash of penalties and numerous red-zone flubs by the Broncos' budding offense.

Although the Niners bring one of the league's stingiest defenses to Denver, Wilson is 16-4 against San Francisco in his career.

“Can’t escape,” 49ers linebacker Fred Warner said when asked about facing Wilson again six months after he was traded out of NFC West. “Just playing against him all these years, his escapability and just the savvy and his big-play ability — you've just got to make sure you keep him in front and you contain him. If you give him that little sliver of space, he’ll take it.”

The 49ers are thankful they found no takers on the trade market for Jimmy Garoppolo, who took a pay cut to stay in San Francisco as Trey Lance's backup after recovering from offseason shoulder surgery that hurt his value.

Instead of having their season derailed by Lance's season-ending broken ankle, the Niners are confident they can still contend with Garoppolo — they're 31-14 when he starts and have made it to the Super Bowl and to the NFC title game in his two healthy seasons as the starter.

“It definitely turns out to be a very smart move for us,” defensive end Nick Bosa said. “The fact that we have a quarterback who’s done so much for this organization already and has all the experience that he has, and the fact that we get him back, is very big for our team.”

The strength of the Niners has always been the defense regardless of who is under center. That was evident the first two weeks as San Francisco held both Chicago and Seattle to fewer than 220 yards, a feat no team has accomplished since the Panthers in 2017.

After brushing off a question about nerves on the eve of the opener, Hackett has done a 180 and acknowledged this week that his own dawdling as an unpolished play caller is to blame for Wilson's slow start.

“I’m doing every single thing I can to try to put myself in position to be able to make quicker, faster, more efficient decisions,” Hackett said.

“Of course it helps to have familiarity with any team,” Jones said. “But I will never take away that Kyle is a genius. And he's smart enough to also know my strengths and my weaknesses. I'm not dumb enough to be like, ‘I’m going to dominate the whole game,' because that's a smart man over there.”

San Francisco tight end George Kittle is expected to make his 2022 debut at Denver after missing the first two games with a groin injury. The last time these teams met, Kittle burned the Broncos for 210 yards on seven catches, all in the first half. Shanahan apologized afterward for not feeding him the ball after halftime when he needed just 5 more yards to break Shannon Sharpe's NFL record for most receiving yards by a tight end in a game, set against the Chiefs in 2002.