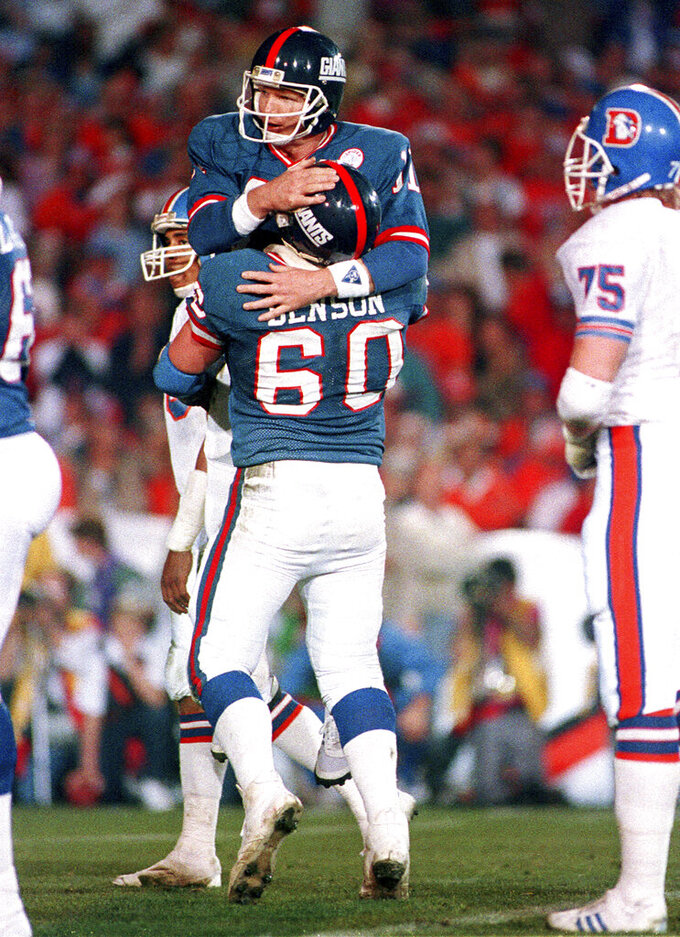 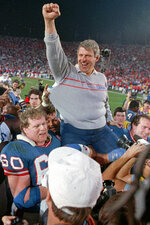 John Elway received all the attention leading up to the game. Phil Simms ended up with all the glory.

And Bill Parcells got drenched with the first Super Bowl-winning Gatorade shower.

The New York Giants walked off the Rose Bowl field on Jan. 25, 1987 as champions after a 39-20 victory over the Denver Broncos. It was the franchise's first Super Bowl win and first NFL title since 1956.

"As long as I live, I’ll always have a Super Bowl ring,” star linebacker Lawrence Taylor said after the game. “One time in my career, we are considered the best in the world.”

Under Parcells, it wouldn't be the last.

The coach who almost lost his job in 1983 after a 3-12-1 first season with the Giants turned the franchise into perennial playoff contenders during his eight seasons in New York, and put himself on a path to the Pro Football Hall of Fame. There were five postseason appearances in that span and a second Super Bowl victory four years after the breakthrough win in Pasadena, California.

Parcells retired from football — briefly — because of health issues after that championship in 1991. But he set the tone for a Giants franchise that expects to regularly contend for the playoffs — and more — and is trying to recapture that approach after hiring Brian Daboll last week as its fifth coach in eight years.

And while Parcells is to be credited for creating the Giants' blueprint for a winning culture, their first Super Bowl win came largely thanks to Simms, who established himself as a star by outplaying one of the game's most heralded quarterbacks.

He went 22 of 25 for 268 yards and three touchdowns, and set Super Bowl records with his 88% completion rate, 10 consecutive completions and 150.9 passer rating.

He sure was. And it was exactly what New York needed.

The Giants trailed Elway’s Broncos 10-9 at halftime. But behind Simms, they scored 24 points in the first 19 minutes of the second half and turned the game into a stunning blowout.

“That ought to dispel any myth about Phil Simms,” Parcells said. “He was absolutely magnificent today. That’s as good as has ever been played.”

And good enough for Disney.

After the game, Simms became the first star of the now-famous “I’m going to Disney World” TV ad campaigns — a Super Bowl tradition for decades to come.

But during the leadup to the game in 1987, much of the hype was centered on Elway, the gunslinger who quickly established himself as one of the NFL's top quarterbacks — and playoff performers. Two weeks before facing the Giants, Elway led the Broncos on “The Drive,” marching Denver downfield against Cleveland 98 yards with 37 seconds left to tie the AFC championship game. The Broncos won on Rich Karlis' 33-yard field goal in overtime.

That victory only grew Elway's star, and he was the media darling during the days before the game. Simms was the “other” quarterback.

He changed all that with his performance, which remains one of the Super Bowl's top individual quarterback efforts.

They all helped make New York a 9 1/2-point favorite coming in — and created a tough time for Elway, who went 22 of 37 for 304 yards and a touchdown with an interception. He also ran for a score, but was outplayed by Simms.

The same could be said of Denver the following year, when the Broncos were blown out by Doug Williams and Washington 42-10. It marked just the second time a team lost Super Bowls in back-to-back years.

Elway and the Broncos would lose another two years later, but would eventually win consecutive championships in 1998 and ’99. He retired a few months later, and was inducted into the Pro Football Hall of Fame in 2004.

As for Simms, his career was solid but didn't quite take off after that big performance — and he was hurt and didn't play in the Giants' next championship win in 1991.

But for one night, he was the greatest quarterback in Super Bowl history. And he helped Parcells and the Giants — and their fans — feel what it's like to be a champion.