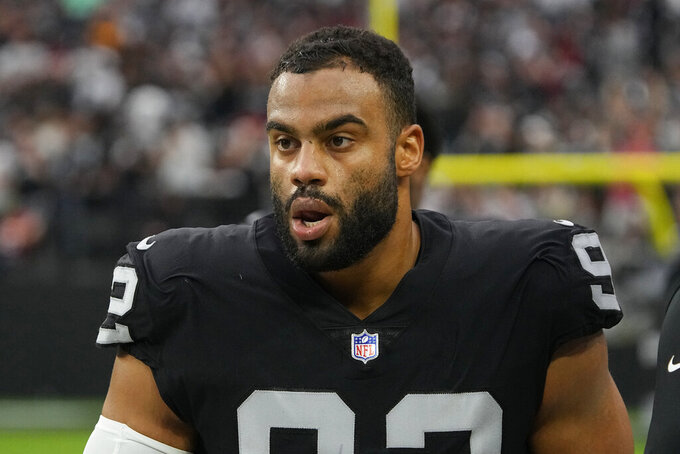 Las Vegas Raiders defensive end Solomon Thomas (92) looks on during the second half of an NFL football game against the Washington Football Team, Dec. 5, 2021, in Las Vegas. Thomas' production during his first five NFL seasons has not reflected his lofty draft status. The defensive lineman knows that. And he expects that to change after signing with the New York Jets and reuniting with coach Robert Saleh. “I'm excited to go off,” Thomas said Wednesday, March 30, 2022 during a Zoom call with reporters. (AP Photo/Rick Scuteri, file)

The defensive lineman knows that. And he expects that to change after signing with the New York Jets on Wednesday and reuniting with coach Robert Saleh.

The 26-year-old Thomas was the third overall pick by San Francisco out of Stanford in 2017, but failed to have the impact the 49ers hoped. He signed a one-year deal with the Jets after playing last season with the Raiders.

A torn ACL in Week 2 of the 2020 season — against the Jets — played a role in that, sidelining him the rest of that season after he had a promising training camp.

“No one has higher expectations for myself than me,” Thomas said. “I was drafted third for a reason. I know what I can do in this league, and that’s why I’m still here and I’m still here striving to do what I know I can do. I haven’t performed exactly how I’ve wanted over the years. My production is not there. But, I’ve had a good year here and there, I’ve had good plays.”

Thomas had six sacks in his first four seasons with the 49ers, all with Saleh as his defensive coordinator. He also had 23 quarterback hits, 22 tackles for loss and a fumble recovery. He wasn't re-signed last offseason by San Francisco and headed to Las Vegas on a one-year deal.

Thomas had a career-high 3 1/2 sacks and 12 quarterback hits while playing in all 17 games for the Raiders.

“Most importantly, I show up and try to be the best teammate I can be every day,” he said. "I try to bring championship-level effort, championship-level professionalism to a program every day I can. That’s what I’m here to do. I know my personal production can go up a lot. I know I can be a way better player in this league.”

That's what Saleh and the Jets are hoping for, adding Thomas to a line that needed some depth after losing Folorunso Fatukasi to Jacksonville in free agency. He'll team with the likes of Quinnen Williams, John Franklin-Myers, Sheldon Rankins, Nathan Shepherd, recently signed Jacob Martin and Carl Lawson, who missed all last season with a knee injury, to give New York strength up front on the defensive side.

Thomas is also an ideal addition to the system run by Saleh and defensive coordinator Jeff Ulbrich.

Thomas was also well aware of the twist in that he'll be playing his home games at MetLife Stadium, where he tore up his knee two years ago. That's something he made peace with last season when he played against the Giants while with the Raiders.

“I came out early (on) the field about three hours before game time, and I sat on the turf and I made amends with it,” Thomas said. "I talked to it, I forgave it. I said, ‘Hey, moving forward, we’re going to be buddies.’ And you know, I’m glad I did that because now I'll be playing here eight or nine games a season. But also it was a new turf and I know that it’s broken up a little bit and it’s more firm now and it’s a better turf now. So, I’m excited to be here.

“And like I said, me and the turf are on good terms now, so we’re all good to go.”