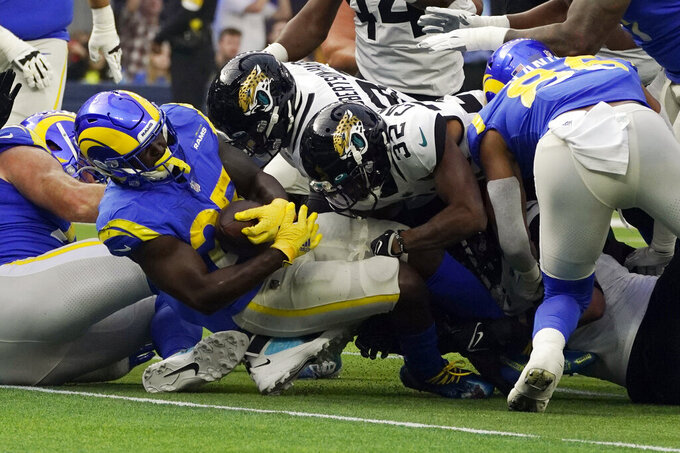 THOUSAND OAKS, Calif. (AP) — For the third time in four seasons, the Los Angeles Rams appear to be getting a major boost in December from a running back who's bursting into the lineup and finishing the regular season strong.

It happened during their Super Bowl campaign three years ago when C.J. Anderson signed with the Rams and surprisingly excelled in place of a hobbled Todd Gurley. It happened again last season when rookie Cam Akers barged past Darrell Henderson into the primary role and then kept it through LA's playoff run.

Sony Michel might be doing it again for the Rams (8-4) after his breakthrough game last weekend.

Michel rushed for 121 yards and a touchdown and also caught three passes in the Rams' 37-7 rout of Jacksonville. With Henderson still slowed by the thigh injury that kept him on the sideline against the Jaguars, Michel is likely to be Los Angeles' lead back again Monday night when it visits the NFC West-leading Arizona Cardinals (10-2).

“I didn’t really think about them putting it on me,” Michel said of the Rams' game plan. “I just thought, ‘Any opportunities that I get, I’m going to try and take advantage of it.’ And opportunities just kept coming my way. I was very fortunate.”

Michel's performance was the Rams' first 100-yard rushing game of the season and his first since moving to the West Coast from New England in a summer trade. His 24 carries were one fewer than he got in his previous five games combined, but Michel has been waiting and preparing for a consistent opportunity since he arrived in LA.

“I wasn't as sore as I expected to be,” Michel said. “I'm pretty well turned over now, and ready to roll.”

The Rams acquired Michel in late August, a month after Akers tore his Achilles tendon while preparing for training camp. Michel got a moderate amount of work early in the season, but LA's rushing game hadn't been consistently effective this season while Henderson got nearly twice as many carries as Michel.

Everything changed when Michel got a primary role for the first time since the Rams' first meeting with Arizona in early October, a game in which Michel lost his only fumble of the season.

“Yes, I had to be patient,” Michel said. “I'm still being patient, because you never know. ... I make sure I take every rep seriously. In the meeting room, take as many notes as I can. Pay attention to the details in practice and try to execute to the best of my ability."

Sean McVay and the Rams know all about Michel’s past, along with his ability to excel in late-season spotlights: Nearly three years ago, Michel capped his rookie season by rushing for 94 yards and the only touchdown scored in Super Bowl 53 while the Patriots beat the Rams 13-3.

“You can tell he’s been in New England,” quarterback Matthew Stafford said. “He’s a grinder. He likes to come in here and work, and that’s awesome.”

The Rams knew they had a solid runner in the fourth-year pro, but Michel was given only intermittent chances to show it before December. Michel’s opportunity against the Jaguars coincided with McVay’s decision to push a run-first game plan, both to establish the Rams' physicality and to set up the play-action passing that used to be Los Angeles’ biggest weapon.

Michel's physical, tenacious running style worked particularly well against the Jaguars, and he could have plenty of opportunities against an Arizona run defense giving up 4.7 yards per carry, one of the worst marks in the NFL.

Michel is grateful for every opportunity, but he also believes consistent playing time can only help in Arizona and beyond.

“Getting in a rhythm, yeah, I would say it's a real thing,” Michel said. “As running backs, we love to try to get in a rhythm. It's a little bit more difficult when you're in and out of the game. But every opportunity you get, you've got to get as much as you can out of it.”