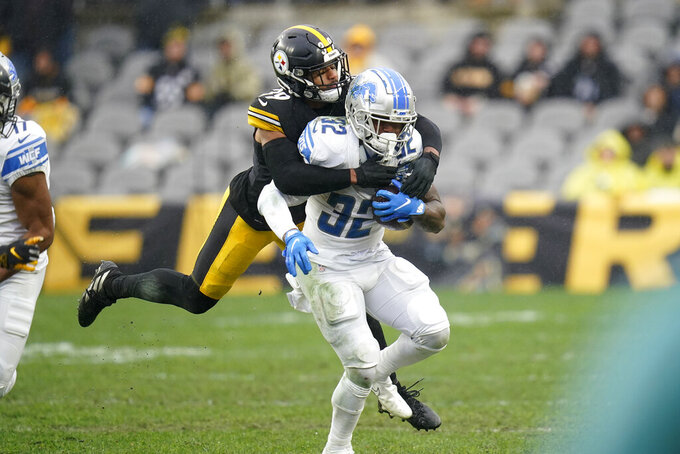 PITTSBURGH (AP) — T.J. Watt and Minkah Fitzpatrick will spend Sunday afternoon on the field in Cincinnati and not on their phones back in Pittsburgh.

Neither player was listed on Friday's injury report, clearing the way for their return after they spent last Sunday on their couches watching a fitful 41-37 loss on the road to the Chargers.

Watt missed the fourth game of his career while nursing hip and knee injuries suffered during an ugly tie against Detroit on Nov. 14. Fitzpatrick sat out for the first time as a pro after entering the NFL's COVID-19 protocol.

Yeah, it was weird. Painful too. Mentally and physically.

“It sucks," said Watt, the perennial All-Pro linebacker whose 12 1/2 sacks this season rank second in the league. “You see all the effort guys are giving and trying to spark the team, especially defensively, guys like Cam Sutton and Cam Heyward, and it just sucks when you know you can help. But I wasn't healthy enough to help, so it was just a helpless feeling.”

Watt, Fitzpatrick and veteran cornerback Joe Haden — out with a sprained foot — vented in a group text while watching the Steelers (5-4-1) give up 533 yards, including 75 on the winning drive in the final minutes. Watt and Fitzpatrick praised the effort of the fill-ins while being acutely aware of how their presence might have changed the outcome.

Fitzpatrick should be available when Pittsburgh visits Cincinnati (6-4) hoping to get a measure of payback for a lopsided 24-10 loss at Heinz Field back in September. The team removed Fitzpatrick from the COVID-19 list on Thursday and he insists he feels fine.

Watt is a little more guarded about his status, saying merely “I'm able to do stuff” but stopped short of saying he'll be ready to go Sunday.

The fact it's even a possibility for Watt is a victory of sorts after he laid on the turf for several minutes in the late afternoon gloom against the Lions following a sack of Detroit quarterback Jared Goff.

For Watt and his team both. The Steelers are 0-4 in Watt's career when he can't play, including that loss to Cincinnati two months ago when Joe Burrow threw for three touchdowns as the Bengals got their first double-digit road victory over Pittsburgh since 1995.

Pittsburgh is 0-1 when Fitzpatrick is unavailable. The standout safety ended up testing positive for COVID-19 after the Detroit game, though he said the only symptom he dealt with was a headache. That made watching from the couch all the more frustrating, a frustration he took out in the group chat.

“It’s out of my control what happened,” Fitzpatrick said. “It was tough watching. We were all texting, all three of us are competitors, and we were all just talking about how crazy it is just being at home while your boys are out there in LA.”

Pittsburgh finds itself in a precarious position after being the only team this season unable to beat the Lions, following it with the worst defensive performance in eight years (from a yardage standpoint) against the Chargers. Getting swept by Cincinnati for the first time since 2009 would put a massive dent in Pittsburgh's bid to remain a legitimate threat in the AFC North.

There's so much at stake, the Steelers have no intention of seeking any sort of individual payback against Bengals wide receiver (and Pittsburgh native) Tyler Boyd, who intimated the Steelers quit in the fourth quarter during the first meeting.

“That just sounds nice after a ‘W',” Fitzpatrick said. “We ain’t worried about what he said.”

Pittsburgh is more concerned about trying to slow down Cincinnati running back Joe Mixon, fourth in the league in both yards rushing and rushing touchdowns. Mixon ran for 90 yards against Pittsburgh on Sept. 26 and has six scores in his last four games. He now faces a defense that gave up four touchdowns to Los Angeles back Austin Ekeler a week ago.

“They like the ball in (Mixon's) hands,” Fitzpatrick said. “Obviously a testament to how they play the game. They like running the ball with him, and getting the ball in Joe Burrow’s hands, as well. They’re a good one-two punch.”

One the Steelers must withstand if they are to stay in the mix.

NOTES: While Watt and Fitzpatrick seem good to go, Haden is questionable. ... TE Eric Ebron (knee) and center/guard J.C. Hassenauer (pectoral) are both out.