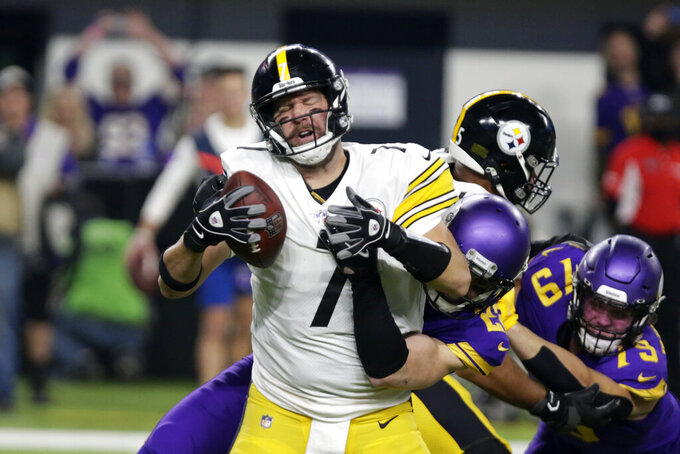 BETTING LINE: Titans by 1 1/2, according to FanDuel SportsBook.

AGAINST THE SPREAD: Tennessee 8-5; Pittsburgh 5-8.

TURNOVER DIFFERENTIAL: Titans plus-3; Steelers minus-2.

TITANS PLAYER TO WATCH: OLB Harold Landry III. Landry is blossoming in his fourth year. His 11 sacks give him a chance to break the franchise record of 14 1/2 set by Jevon Kearse in 1999. The Steelers have struggled at protecting QB Ben Roethlisberger, particularly from pressure off the edge.

STEELERS PLAYER TO WATCH: RB Najee Harris. The rising star's 1,270 yards of total offense are a franchise record for a rookie and his 60 receptions are third most in franchise history for a rookie regardless of position.

KEY MATCHUP: Tennessee offensive line vs. Pittsburgh defensive end Cam Heyward. At times it seems Heyward has found himself going one on five to mask the shortcomings of an injury-depleted defensive line. The co-captain is having perhaps the finest season of his 11-year career but if the Titans can neutralize him — as Minnesota did last week — there should be acres of open space for whoever lines up in the Tennessee backfield.

KEY INJURIES: Titans OLB Bud Dupree started practicing Wednesday and could be cleared from injured reserve in time to play Sunday against his old team. Titans OLB David Long Jr. has missed four straight games with an injured hamstring. Starting DL Teair Tart has missed three of four with an ankle. LG Rodger Saffold has an injured shoulder. ... Steelers are optimistic LB T.J. Watt (groin) and DB Joe Haden (foot) will be able to play. Watt, the NFL's sacks leader, tweaked the groin last week against Minnesota. Haden hasn't played since getting hurt in a tie with the Lions last month. Pittsburgh DL Carlos Davis (knee) and Isaiah Buggs (ankle) could also return in an effort to shore up the NFL's 30th-ranked run defense.

SERIES NOTES: The Steelers have won six of the last eight meetings between the former AFC Central rivals and five of the last six at Heinz Field. Pittsburgh escaped Nashville with a 27-24 win last October on its way to an 11-0 start. The Steelers nearly blew a 20-point third-quarter lead but Tennessee kicker Stephen Gostkowski's 45-yard tying field goal attempt sailed wide in the final seconds. Roethlisberger is 6-3 against Tennessee with 19 touchdowns, 11 interceptions and a 95.0 QB rating.

STATS AND STUFF: The Titans are coming off their first shutout win in three years after drilling hapless Jacksonville last week. Tennessee can win its second straight AFC South title with a win and an Indianapolis loss to New England. ... Tennessee coach Mike Vrabel began his playing career in Pittsburgh after being taken in the third round of the 1997 draft. ... The Titans running game has found a rhythm of late even with star Derrick Henry on injured reserve. Tennessee has averaged 158.3 yards rushing over its last three games and gone over 100 yards rushing in each contest after averaging 67.5 yards per game in its first two matches after Henry went down with a foot injury. ... Tennessee QB Ryan Tannehill needs 40 yards passing to reach 30,000 in his career. ... Titans P Brett Kern is scheduled to appear in his 194th game for Tennessee, tying him with former LT Brad Hopkins for third in franchise history behind OL Bruce Matthews and DL Elvin Bethea. ... The Steelers are 1-3-1 in their last five games but remain in the mix in the underwhelming AFC North, where all four teams are separated by 1 1/2 games. ... As Watt goes, so go the Steelers. Pittsburgh is 6-2 when he plays a full game and 0-4-1 in games where he sits or is limited due to injury. Watt's 16 sacks lead the NFL. His next sack will break a tie with former LB James Harrison for the single-season franchise record. ... Roethlisberger needs 27 yards passing to move past 2004 NFL draft classmate Phillip Rivers for fifth in NFL history (63,400). Roethlisberger's 63,414 yards passing are the most by a quarterback who spent his entire career with one team. ... Roethlisberger is taking a beating behind a new-look offensive line. He's already absorbed 30 sacks in 12 starts, the most since he took 33 in a full 16-game season in 2014. ... Pittsburgh's 144 fourth-quarter points are second in the league but most of those have come while playing catch-up. The Steelers scored 27 in the fourth quarter of a loss to the Los Angeles Chargers last month and 21 last week against the Vikings.