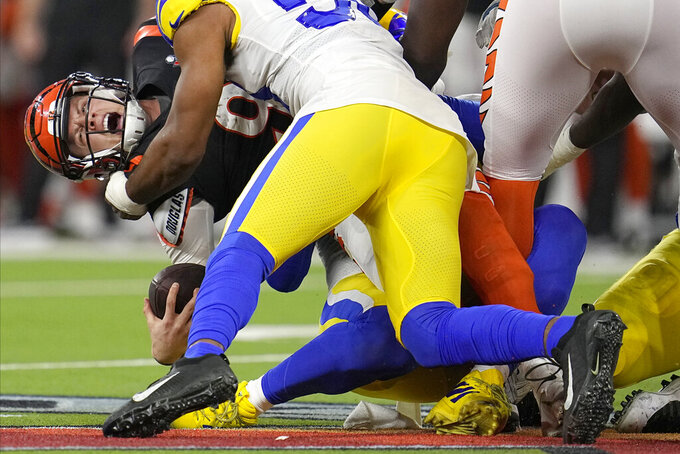 CINCINNATI (AP) — The Cincinnati Bengals weren't expected to be in the Super Bowl.

The Bengals were a good team in 2021, but not a great one. The Super Bowl seemed improbable up until Evan McPherson drilled a 31-yard field goal to beat the Kansas City Chiefs in overtime of the AFC championship game.

Cincinnati, expected to go through another rebuilding year, got there because of the creativity and confidence of quarterback Joe Burrow, the immediate impact of rookie receiver Ja'Marr Chase, the big leg of rookie kicker McPherson and a defense that got better as the season progressed.

It ended in the Super Bowl when a gimpy Burrow, already sacked seven times, ran out of magic on fourth-and-1 as the crushing pass rush of the Los Angeles Rams closed in again.

A couple of more seconds in the pocket and Burrow might have seen that Chase was open downfield. But Burrow's desperation flip fell incomplete, and the Bengals lost 23-20.

“I'm probably one of everybody on our staff and on our team that thinks, ‘Man, if I could have just done one thing differently, maybe we would have won,'" coach Zac Taylor said Wednesday. “That’s the part that you have to come to terms with and be able to move on from at some point. It also fuels us. I've had a day off now, and you want to get back to work because I want to get back to the Super Bowl to finish in the right way.”

The worst-to-first Bengals finished 10-7 in the regular season, beat the Raiders 26-19 in the wild-card round and topped Tennessee by three points in the divisional round — despite Burrow being sacked nine times in the game — before capturing the AFC title in Kansas City.

The defense kept them in those games until Burrow could find a way — an overarching theme of the entire season.

Cincinnati played well in December while Baltimore and Pittsburgh faltered, giving the Bengals their first divisional title and playoff appearance since the 2015 season. The Jan. 15 win over the Raiders was the first for Cincinnati in the postseason in 31 years.

The Bengals announced Wednesday that the 38-year-old Taylor, who was 6-25-1 in the first two seasons of his first head coaching job, got a five-year contract extension.

“There’s just a lot of trust in the building," Taylor said. “We have the right people.”

The addition of Chase was the piece that gave the Bengals one of the best wide receiver groups in the NFL. The 21-year-old first-round pick had some drops in the preseason, but went on to win the Offensive Rookie of the Year award. His 1,455 receiving yards in the regular season were the most by a rookie in the Super Bowl era and the most in team history.

Tee Higgins, in his second year, and veteran Tyler Boyd also had some huge games. The three combined for nearly 3,400 yards and 24 touchdowns.

The offensive line still needs work. Burrow was battered the entire season — the most sacked quarterback in the NFL. Against better defensive lines, like that of the Aaron Donald-led Rams, Burrow was constantly under siege. Including the postseason he was sacked 70 times — third most in NFL history. Taylor wouldn't get into specifics Wednesday about what he thinks needs to happen with the line, but expect the Bengals to look to the free-agent market for some plug-and-play help.

AND THEN THERE'S JOE

After a serious knee injury in his rookie season, Burrow returned in 2021 and got better as he continued healing. He broke a pinkie finger and sprained his other knee but never missed a game. His toughness and unwavering confidence influenced the entire team.

“We’re going to keep getting better and attack next year with the same intensity," the 25-year-old quarterback said.

Taylor said Wednesday that Burrow re-aggravated the MCL sprain of his right knee in the Super Bowl, but won't need surgery and should be fine with extended rest.

A group of fans gathered in frigid weather outside the fence at Paul Brown Stadium to welcome home the Bengals as team buses arrived Monday night. Owner Mike Brown and Taylor are expected to be on hand as the city honors the Bengals at a rally at Washington Park downtown on Wednesday night.

A placard held by a bundled-up fan when the buses rolled in Monday summed it all up: “Thank you for bringing the fun and excitement back to Cincinnati football.”