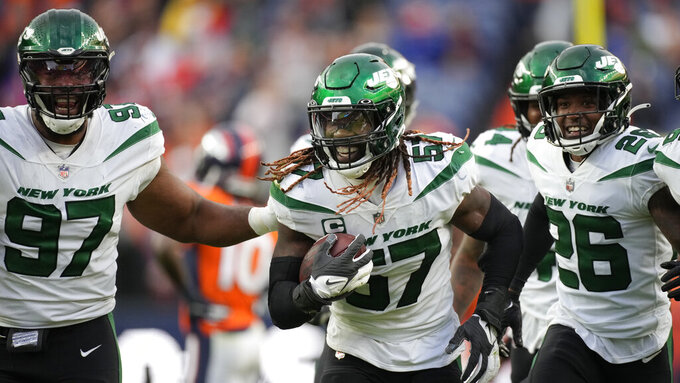 EAST RUTHERFORD, N.J. (AP) — Look around the New York Jets' locker room to find someone who remembers what it was like to beat the New England Patriots — and you can't.

There's no one left.

The Jets have lost 12 straight to Bill Belichick's bunch, with their most recent win coming in Week 16 of the 2015 season. Todd Bowles was the coach of that 26-20 overtime victory at MetLife Stadium, led by quarterback Ryan Fitzpatrick and wide receivers Brandon Marshall and Eric Decker.

Yep, it has been a while.

On Sunday, the surprising Jets (5-2) have a chance to end that skid and create a new storyline when they host the last-place Patriots (3-4). A victory would be New York's fifth straight — which last happened, coincidentally, with that win over New England seven years ago.

But the Jets could make the Patriots continue to fade a bit. And get a small measure of revenge in the process.

The previous time the teams squared off, the Patriots embarrassed the Jets 54-13 just over a year ago at Gillette Stadium. Saleh has downplayed that aspect all week, but the memory remains for his players and coaches.

“I remember the score, I remember a lot of things,” defensive coordinator Jeff Ulbrich recalled Thursday. "I remember it being 40-plus and shots still being taken on us. ... Been looking forward to this one.”

These Jets are also off to their best start since 2010, and the Patriots recognize that.

“It’s very clear with you watching the tape, they’ve figured out who they want to be, how they want to play and that they’re doing it,” Patriots special teams ace Matthew Slater said. "Kudos to them, because I really think they’re doing a tremendous job and they’ve found an identity and they’re playing really good football — as good as anyone in the league right now. I’m not surprised by that at all.

"I think these things come and go in waves. It’s just the nature of the league.”

Belichick's focus is on beating a division opponent, but he also could make some history by doing so.

The Patriots coach has another shot at breaking a tie with George Halas for second on the NFL's career victories list. Belichick and Halas each have 324, including playoffs, with Don Shula (347) the only coach with more.

A victory Sunday would be Belichick's 100th in the regular season against AFC East foes as coach of the Patriots.

After being pulled from New England's 33-14 loss to Chicago on Monday night, Mac Jones will return as the starting quarterback against New York.

Belichick made the announcement Thursday after evaluating Jones at practice. Jones missed three games with a high ankle sprain before returning — briefly — against the Bears. Rookie Bailey Zappe had filled in for Jones, but Belichick decided on going with Jones against the Jets and giving him a full week of snaps with the starters.

“He’s ready to do that,” Belichick said. “So that’s what he needs to prepare for the game, and that’s what our offensive unit needs. Everybody working together. So we’ll get that this week.”

Last week, Elijah Moore requested the Jets to trade him because of frustration in the lack of pass-catching opportunities he was getting.

The second-year wide receiver was kept home for New York's win at Denver, but was back with the team this week — and will play against the Patriots.

Moore, who has only 16 catches after having 43 as a rookie, could see more work in the slot as opposed to primarily working on the outside.

“I know he's happy to be back and ready to go,” offensive coordinator Mike LaFleur said. “I'm just excited to have him back.”

James Robinson had no carries in Jacksonville's loss last week to the New York Giants. The third-year running back should see a much heavier workload now that he's with the Jets.

Robinson was acquired Tuesday from the Jaguars for a conditional sixth-round pick, helping the Jets replace injured rookie Breece Hall. It was uncertain how much Robinson would be involved Sunday as he learns the Jets playbook, but he'll be part of dual-threat backfield bunch with Michael Carter and Ty Johnson moving forward.

Patriots center David Andrews is out this week and remains in the concussion protocol after being injured late in last week’s loss to Chicago by a blindside block following an interception. It will be the first start he's missed since 2020.