Surprise! Smith-Schuster sticking with Steelers in 2021 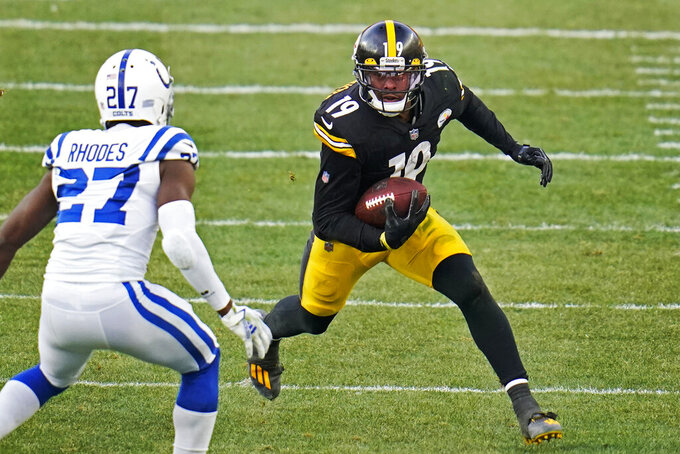 File-This Dec. 27, 2020, file photo shows Pittsburgh Steelers wide receiver JuJu Smith-Schuster (19) running after a catch with Indianapolis Colts cornerback Xavier Rhodes (27) defending during the second half of an NFL football game in Pittsburgh. Smith-Schuster is keeping it “lit" with the Pittsburgh Steelers. The free-agent wide receiver surprisingly opted to return to the Steelers on Friday just days after strongly hinting that his departure on the open market was imminent. (AP Photo/Gene J. Puskar, File)

PITTSBURGH (AP) — JuJu Smith-Schuster is keeping it “lit" with the Pittsburgh Steelers.

The free-agent wide receiver surprisingly opted to return to the Steelers on Friday on a one-year deal just days after strongly hinting that his departure on the open market was imminent.

“Can’t say it enough, I love you Pittsburgh,” Smith-Schuster posted on Twitter. “Came in here a young 20 year old and you guys embraced me from the moment I got here. So much love. Had my back thru everything, all the struggles and success. So hard to leave. See you this Fall in Heinz."

The deal coincides with what could be quarterback Ben Roethlisberger's final season. Roethlisberger adjusted his contract earlier this month to free up a small bit of salary cap space for the Steelers.

While Smith-Schuster's 8.6 yards per reception ranked 126th in the league, but he became Roethlisberger's go-to option in pressure situations and nearly half of his catches resulted in first downs.

The 24-year-old's decision also indicated the power of his own personal brand. Smith-Schuster has cultivated a strong social media following during his four seasons in the NFL. He has 8.5 million combined followers on Instagram, Twitter, TikTok and YouTube.

That reach has made him attractive to advertisers and showcased why he doesn't have to play in a larger media market to become one of the league's higher-profile players.

Still, that presence can sometimes come at a price. He annoyed opponents late in the 2020 season with his practice of dancing on the midfield logo before each game, both home and away.

He quit after coach Mike Tomlin said he was going to speak to him about it and took a decidedly low-key approach during Pittsburgh's late collapse as the Steelers dropped five of six following an 11-0 start, including a blowout loss at home to Cleveland in the first round of the playoffs.

Smith-Schuster is also essentially betting on himself after the league negotiated a new lucrative media deal that should send the salary cap skyrocketing in 2023. It also doesn't commit him to the Steelers for the post-Roethlisberger era.

The signing, however, could come at a cost to the NFL's third-ranked defense. Cornerback Steven Nelson appears to be on his way out. ESPN reported the team has given Nelson permission to explore a trade, a development Nelson appeared to acknowledge when he posted “ Blessing in disguise ” on his Twitter account.

The 28-year-old Nelson carries a $14.4 million salary-cap hit in 2021 and could be expendable — though perhaps not easily replaceable — after the Steelers re-signed cornerback Cam Sutton earlier this week.

Nelson has started 30 games and picked off three passes in his two seasons with the Steelers, teaming with Joe Haden to form one of the better cornerback tandems in the NFL.