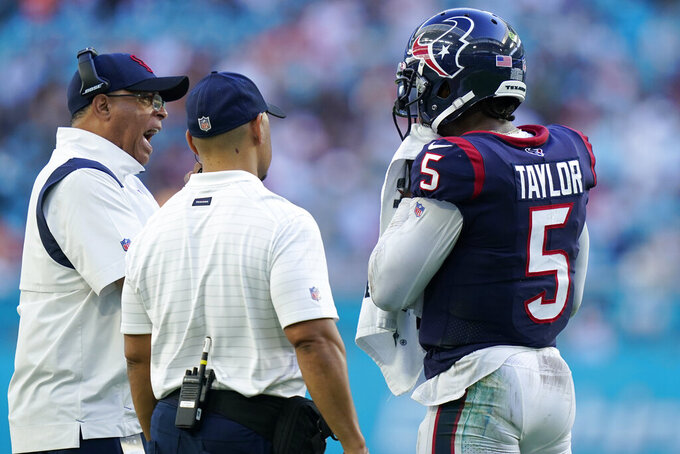 Houston Texans head coach David Culley talks to quarterback Tyrod Taylor (5) on the sidelines during the second half of an NFL football game against the Miami Dolphins, Sunday, Nov. 7, 2021, in Miami Gardens, Fla. (AP Photo/Lynne Sladky) 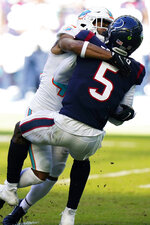 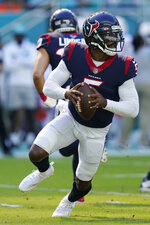 MIAMI GARDENS, Fla. (AP) — Houston quarterback Tyrod Taylor had an excuse waiting if he wanted one. He could have blamed his numbers Sunday on the fact that he had missed nearly two months because of a hamstring injury and that he wasn’t in any sort of game rhythm.

Instead, he took ownership.

Taylor threw three interceptions for just the second time in his college and pro career Sunday, part of another dismal day for the Texans (1-8). Despite forcing five turnovers, they lost 17-9 at Miami and had their losing streak reach eight games.

His only other game as a pro with three interceptions was Sept. 20, 2015, for Buffalo against New England, and even that one comes with a bit of an asterisk since his final giveaway that day skipped off the fingers of a receiver as the Bills tried to complete a frantic comeback down the stretch.

Otherwise, every other game in his NFL career, before Sunday, saw him throw no more than one interception. He never had more than two in any game in college at Virginia Tech, either.

“This week we wanted to put the pressure on Tyrod,” Dolphins safety Eric Rowe said. “Once you see an offense and they can’t figure it out, you keep running it. That’s our mindset, get pressure on these quarterbacks.”

Taylor completed 24 of 43 passes for 240 yards, no touchdowns and the three interceptions. It was his first game action since the first half of Houston’s Week 2 matchup. He’d been sidelined since by injury.

“I walked into this game fully confident in my ability to go out and perform,” Taylor said. “It just was a lack of execution and like I said, that starts with me. I own up to that. I have to be better for our team to have a chance to win and I’ll be better.”

It wasn’t just the interceptions that bothered Taylor. He missed some easy throws as well.

Most damning of them all, he thought, was this: A third-quarter play where Danny Amendola had gotten behind the Miami defense and probably would have been able to walk into the end zone for a score. Taylor rolled right, saw Amendola alone, and wasn’t even close with the throw.

At 1-8, the Texans probably know that realistic hope is gone as far as a playoff push. They have their bye next week, then resume against Tennessee on Nov. 21.

“We regroup and we continue to keep pushing, preparing,” Taylor said. “One game at a time, one day at a time. As far as hope, there’s not a lack of hope. If anything, guys are eager to get out there and turn it around.”