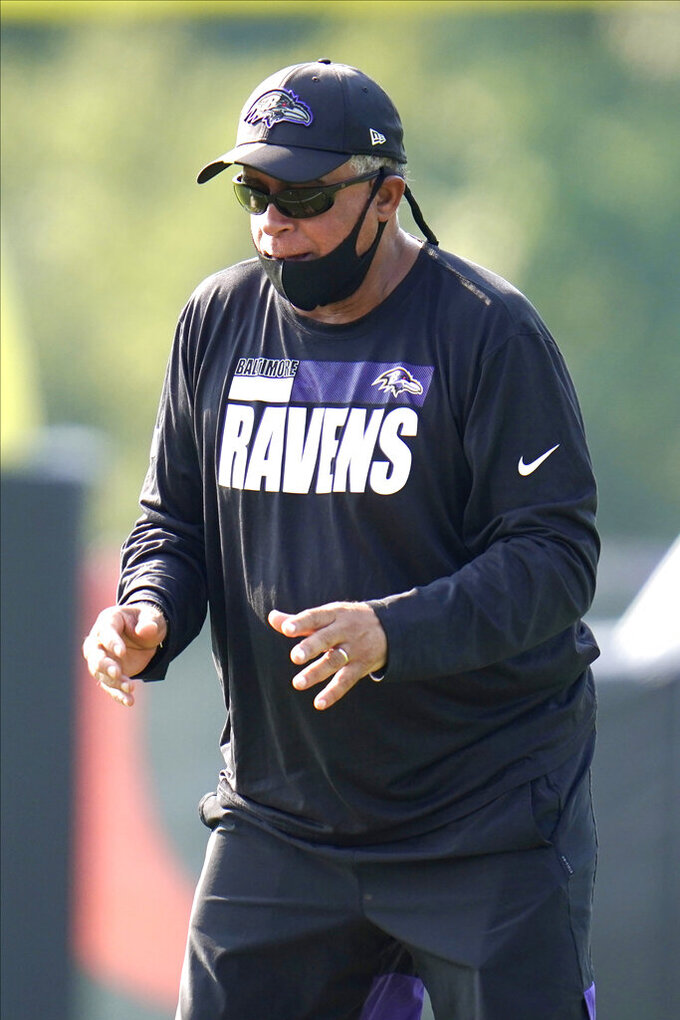 FILE - Baltimore Ravens assistant head coach David Culley works with wide receivers during an NFL football training camp practice in Owings Mills, Md., in this Tuesday, Aug. 25, 2020, file photo. David Culley has been hired as the coach of the Houston Texans, a person familiar with the hiring told The Associated Press. The person spoke to the AP on condition of anonymity Wednesday night, Jan. 27, 2021, because the hiring hasn’t been announced. (AP Photo/Julio Cortez, File)

HOUSTON (AP) — David Culley became the coach of the Houston Texans believing Deshaun Watson would be his quarterback.

Whether that will be the case when next season begins is becoming increasingly unclear with The Associated Press told this week that Watson has requested a trade.

Culley was introduced as Houston's coach on Friday in a news conference that was dominated by questions about the future of the franchise quarterback.

“The reason I’m in this position today is because I knew he’s going to be a Houston Texan," Culley said. “And so the outside stuff that was being said was irrelevant to me."

Before taking questions from reporters about Culley, general manager Nick Caserio, who was hired earlier this month, addressed the turmoil with Watson.

“And we have zero interest in trading the player, we have a great plan, great vision for him and for this team and his role in our team."

Culley believes the NFL is doing a good job of minority hiring and hopes that his hiring will pave the way for those after him.

“I got this job simply because I was the best football coach that they wanted in this situation, and I happen to be African American," he said. “I’m proud of that. I’m happy for that. And I hope if me getting this job because of that reason allows other teams in this league to see that ... so be it. I’m part of it and I’m for that."

Houston’s coaching search has been under scrutiny after the team did not initially request to interview Bieniemy, and Sports Illustrated reported that the decision upset Watson.

The quarterback was already unhappy that owner Cal McNair did not take his opinion into account when hiring Caserio, according to reports from ESPN and the NFL Network. Houston requested to interview Bieniemy after reports surfaced that Watson was upset.

McNair opened Friday's news conference with a short statement welcoming Culley to the team, but did not take questions.

“We have added a very well respected and experienced member to our Texans' family in our new head coach, David Culley," McNair said. “We met with a lot of terrific candidates throughout the process, but David’s vision and ability to bring people together made it obvious to us that he is our guy."

The 65-year-old Culley becomes the fourth coach in Texans history, replacing Bill O’Brien, who was fired after the team opened the season 0-4.

Culley doesn't see this job as a rebuilding project and said his goal will be to contend for a championship and leave this season's 4-12 record in the past.

“This is a new year. this is a new start and what we’re getting ready to do now, will have nothing to do with what happened in the past,'' Culley said. “We’re going forward right now to do the things that we need to do to be the best franchise that we can be and go and try to accomplish that goal."

Culley, who has been with the Ravens since 2019, has worked as an NFL assistant since 1994, also spending time with Tampa Bay, Pittsburgh, Philadelphia, Kansas City and Buffalo. He began his career as a college assistant and spent 1991-93 at Texas A&M.

Culley was an assistant for Kansas City coach Andy Reid for many years starting in Philadelphia and working for him with the Chiefs from 2013-16.

“David will do a good job," Reid said. “He’s a people person, he’ll bring energy to the building, and he’s one of the most loved guys I’ve ever been around. So, he’s just a great person. I mean, we were together 18 years, so we had a few cheeseburgers together.”