Tim Patrick is Mr. Reliable but fame hasn't followed him 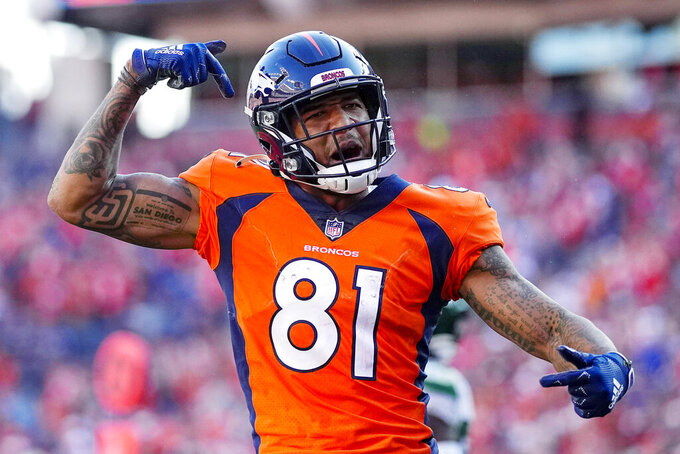 FILE - In this Sunday, Sept. 26, 2021, file photo, Denver Broncos wide receiver Tim Patrick celebrates after a catch against the New York Jets during an NFL football game in Denver. Tim Patrick hasn't just grown accustomed to being underestimated, he's come to embrace the slights. The sure-handed fourth-year wide receiver isn't sure he'll ever stop being overlooked, either. “Honestly, probably not,” Patrick said. “But I like it that way. I’m just going to keep on doing what I have to do to help this team get some wins and we’ll see where we’re at the end of the season.”(AP Photo/Jack Dempsey, File)

ENGLEWOOD, Colo. (AP) — Tim Patrick seizes the back-shoulder throw and still gets the cold shoulder. He makes the contested catch and remains incognito. He hauls in the pass with both the defender and the sun in his face and again gets overlooked.

Surrounded by bigger names, faster players, better route runners, the soft-spoken Patrick fades into the background — except on game days.

Fant can't fathom why a reliable receiver like Patrick doesn't get more respect.

“Honestly, it’s tough to say why, but you’ll get guys who do the same thing in the league that Tim has done and they’ll be super hyped up, everybody will be buzzing around them,” Fant said. “And then you’ll find guys like Tim who’s done so many good things, had all these crazy catches and they’re, like you said, overlooked.

“The great thing about Tim, though, is that he doesn’t really care. He’s just going to do what he’s supposed to do all the time. He’s going to make the plays that he needs to and it doesn’t really matter to him. I would say this, though, people need to start respecting him."

Patrick, who went undrafted out of Utah and was cut three times before establishing a foothold in Denver, has come to embrace the slights.

“Honestly, probably not,” he responded when asked if he thinks he'll ever stop surprising people with his play. “But I like it that way. I’m just going to keep on doing what I have to do to help this team get some wins.”

When Courtland Sutton's season ended with a knee injury after just one catch last year, Patrick stepped up and set career highs with 51 receptions for 742 yards and six touchdowns.

This summer, the 6-foot-4, 212-pound target was a coveted candidate for a possible trade, but the Broncos (3-0) are glad they didn't deal him away like they did Trinity Benson.

Denver's depth isn't what it was when the season started. Jerry Jeudy (ankle) is out until November and KJ Hamler (knee) until 2022.

The Broncos welcomed former Seattle slot receiver David Moore on Wednesday, and two other receivers on their roster — emergency QB Kendall Hinton and kick returner Diontae Spencer — have a combined 10 catches in the NFL, all by Spencer.

Patrick caught five passes for 98 yards in Denver's 26-0 win over the Jets on Sunday, prompting coach Vic Fangio to argue, “Tim's a damn good NFL receiver," as though he were making a closing argument to a skeptical jury.

“Honestly, I watched the tape last night, and I didn’t think I played that well,” Patrick said the next day, criticizing his route running as a little too sloppy.

So, like every other week, be assured he'll stay on the field long after practice is finished so he can hone his craft.

That extra work has paid off.

According to Sportradar, 75 players have been targeted at least 85 times since the start of last season and Patrick is the only one who hasn't been charged with a dropped pass.

Despite being so reliable, Patrick's play still catches people off-guard, and he knows exactly why.

“Undrafted,” he said. “I’m never going to get viewed as that guy just because I wasn’t drafted, so they think my ceiling isn’t high. But I’m a different type of undrafted guy so my ceiling is pretty high.”

“In college, I think almost every defense I played all their DBs got drafted, and I’m all of their bad tapes," Patrick said, "so I always had the confidence I just needed an opportunity.”

Baltimore coach John Harbaugh swears he could see Patrick's potential when the Ravens took a chance on the raw receiver who missed more games (17) in college because of injuries than he started (14).

“I really liked him. He was one of my favorite guys in camp that year,” said Harbaugh, whose Ravens (2-1) visit Denver this weekend. “We were unable to hold onto him unfortunately."

“But he’s everything you thought he could be: He’s a big, physical guy, really showed up on special teams first," Harbaugh said. "That’s where you saw what he was about and that personality as a player has carried over to him as a wide receiver.

While that hasn't led to fame, it should lead to fortune. Patrick signed a one-year, $3.384 million contract last offseason after making a combined $1.665 million in his first three seasons in Denver. He's set to become a free agent after this season.