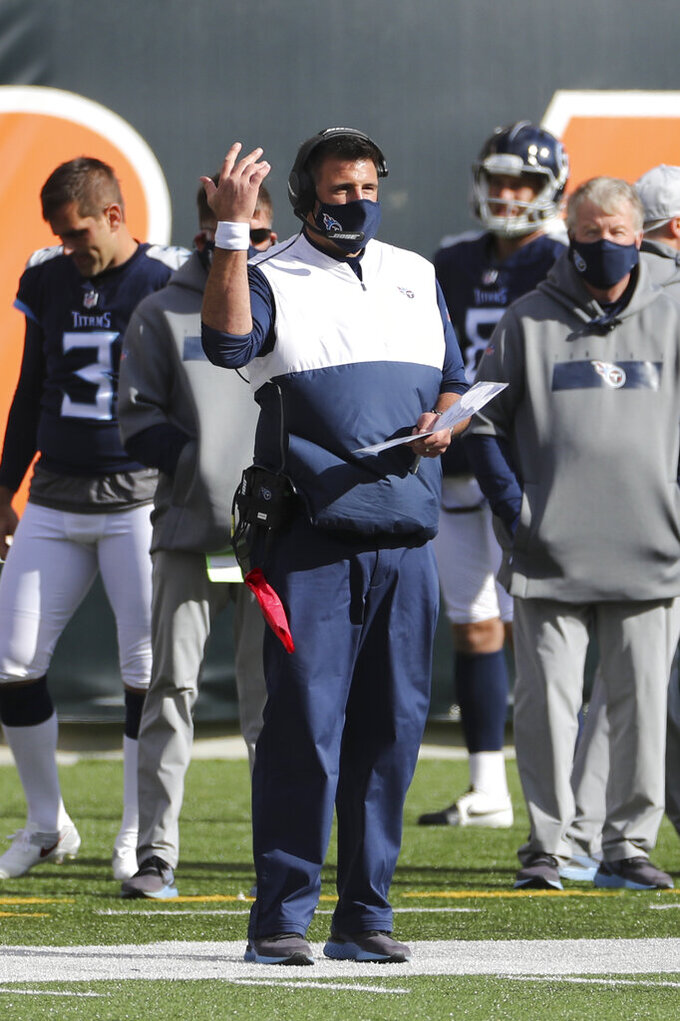 NASHVILLE, Tenn. (AP) — The Tennessee Titans are not happy. Their sizzling start during which they won their first five games is a distant memory with the fresh pain of back-to-back losses for the first time since December.

“It’s tough,” Titans quarterback Ryan Tannehill said. “Everyone’s frustrated. Just not going out and performing the way we expect to is frustrating, plain and simple. But at the end of the day, we have no one to look to but ourselves.”

The Chicago Bears (5-3) also have lost two straight, including a 26-23 overtime loss to New Orleans last week. They are scheduled to visit the Titans on Sunday dealing with a COVID-19 outbreak that included another player testing positive, forcing the Bears to close Halas Hall on Thursday.

The Titans (5-2) went through this themselves a month ago and had two games rescheduled.

The Bears have won each of Chicago’s first three trips to Tennessee. But coach Matt Nagy is busy figuring out a variety of plans for whoever's available Sunday after the positive COVID-19 tests and other injuries.

“Who knows where this thing goes for gameday?” Nagy said. “We don’t know yet.”

The Titans know they must start faster. They trailed Pittsburgh 14-0 before losing for the first time this season and fell behind last week 10-0 after Tannehill was intercepted in the end zone. The Titans lost 31-20 to Cincinnati, and Tannehill says those slow starts are keeping them from putting pressure on defenses.

“It’s going to be really important for us to go out, play well early in the game and put points on the board," Tannehill said. “That way we’re not putting ourselves in a bad situation as it gets down in the second half.”

The Bears could be missing four starters on the offensive line, with right tackle Bobby Massie (knee) placed on injured reserve after being hurt against New Orleans. Center Cody Whitehair (calf) was sidelined for last week’s game against New Orleans and left guard James Daniels (pectoral) is likely out for the rest of the season after being hurt Week 5 against Tampa Bay.

Titans running back Derrick Henry is off to the best start of his career leading the NFL with 775 yards rushing on 161 carries averaging 4.8 yards per attempt and eight touchdowns. Those are all his highest yet through the first seven games of a season.

If he runs for 125 yards and a TD, it would be just the 10th time since 1948 that a player has run for 900 yards and nine TDs through eight games and first since Shaun Alexander in 2005 for Seattle. Jim Brown, Jim Taylor, Eric Dickerson, Emmitt Smith and Terrell Davis to hit those marks.

Bears cornerback Jaylon Johnson said he hasn't played against any running back like Henry: “Naw, I don’t think there is another running back built the way he is.”

The Bears have their own offensive woes being outscored 49-7 in the third quarter. And they’re trying to figure out why.

“I think that’s something we’re working on putting a finger on and figuring out,” quarterback Nick Foles said. “And it’s going to take the coaches and the players to do that. The biggest thing is just going in at halftime and talking through things, and it’s making sure we’re ready to roll going into the third quarter.”

Chicago’s lone third-quarter points came at Carolina in Week 6, when Foles scored on a 1-yard run. The Bears had a rough time against New Orleans, and it wasn’t just because Javon Wims got ejected for punching New Orleans Saints safety C.J. Gardner-Johnson. Wims was suspended two games by the NFL.

This will be Bears kicker Cairo Santos' first game in Nashville since Oct. 6, 2019. That day, he missed three field goals and had a fourth blocked kicking for the Titans in a 14-7 loss to Buffalo. The Titans cut him the next day. Santos is 14 of 16 this season with Chicago.

Stephen Gostkowski now is the Titans' kicker, and he has struggled this season despite making the winning field goal in Tennessee's first three games. Gostkowski is 10 of 17 and has missed a kick in three straight games with another blocked.

The Titans cut their long snapper Tuesday. Three-time Pro Bowl punter Brett Kern holds for Gostkowski but was declared out for Friday because of an injured wrist. The Titans planned to sign a replacement punter after a workout Saturday.