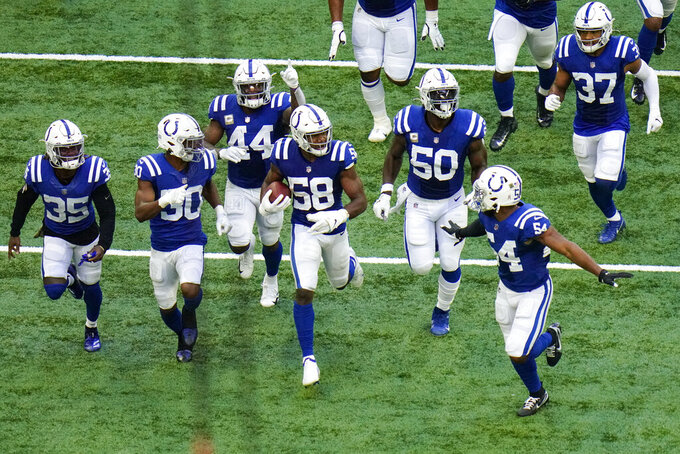 Indianapolis Colts inside linebacker Bobby Okereke (58) celebrates with teammates after recovering a fumble against the Baltimore Ravens in the second half of an NFL football game in Indianapolis, Sunday, Nov. 8, 2020. (AP Photo/AJ Mast)

NASHVILLE, Tenn. (AP) — The Tennessee Titans can take a big step toward winning the AFC South for the first time since 2008 on Thursday night.

That means beating the Indianapolis Colts, the rival that has tormented them most since NFL realignment in 2002 no matter the quarterback or the coach.

The Colts have won 13 of the 18 games played in the Titans’ home stadium since 1999, dominating this series with Peyton Manning and then Andrew Luck. Now it’s Philip Rivers’ turn, and he's 7-2 against Tennessee.

The Titans believe they have their quarterback to turn the tide. Ryan Tannehill is 1-0 against the Colts since becoming the Titans' starting quarterback.

“Obviously, division games are huge,” Tannehill said. “Being at home, big opportunity on Thursday night, so we’re looking forward to this one. I know we all want this really bad, as do they. But at the end of the day it’s going to come down to who can go out and execute and make plays on Thursday night.”

The Titans (6-2) currently sit atop the division and a win would give them a two-game lead with seven games to play. If coach Frank Reich improves to 4-1 against the Titans and coach Mike Vrabel, then his Colts (5-3) would have the head-to-head edge with a rematch on Nov. 29 in Indianapolis.

“There is no doubt it’s a huge game," Reich said.

The Titans are coming off a 24-17 win over Chicago, and they're 4-1 at home this season. Indianapolis lost 24-10 to Baltimore last week after blowing a halftime lead. Reich said the Titans have proven they know how to win games.

“That’s what we really need to do,” Reich said. “We need to prove that we can win these kinds of games against tough teams.”

The Titans have slipped a bit offensively after scoring at least 31 points in four straight games. They haven't topped 24 points in three straight games, and slow starts have been an issue with only one field goal in the first quarter combined in that span.

The Titans still rank seventh in averaging 29 points a game. Tannehill said the key is simply making the plays that are there off play action.

“We don’t have to do anything special or crazy, but when we get opportunities, we have to be able to make those plays,” Tannehill said.

Their next test comes against defending rushing leader Derrick Henry. In two games last year, Henry rushed for 231 yards and two TDs against the Colts. Henry currently leads the AFC and is second in the NFL this season with 843 yards rushing.

The Colts know what to expect.

“They are so run heavy that when they go to play action and screens, they’re so efficient," Leonard said. "That’s what makes them so good. It’s something you really don’t want to see.”

Nobody has allowed fewer sacks than the Colts, who've given up only eight. The Titans have struggled to put quarterbacks on the ground, but they are coming off their best game this season after getting three sacks to finally get to 10 for the season.

Tennessee also will be getting outside linebacker Jadeveon Clowney back after he missed the Bears' game with an injured knee that kept him out of practice last week. But Clowney practiced Tuesday and Wednesday and will play Thursday night still looking for his first sack this season.

The Titans made a team-record 18 transactions last week, and five players made their debut against Chicago after Tennessee cut linebacker Vic Beasley, cornerback Johnathan Joseph and their veteran long snapper. New cornerback Desmond King returned a fumble 63 yards for a TD for a team leading the NFL with a plus-14 turnover margin.

Before Rivers became a franchise NFL quarterback, Rivers thought he was a pretty good defensive player. The game tape revealed otherwise as Rivers failed to stop a 65-yard fumble return for a touchdown.

“We had a couple good laughs,” Rivers said. “Shoot, I can laugh at it as well, probably not as much had we won the game. It makes it a little harder sell to tell you that 20 years ago I was a heck of a free safety after you watch that clip. That’s for sure. It’s funny but not funny because I’m still aggravated I didn’t find a way to get him down.”