Titans now must be road warriors coming off 1st victory 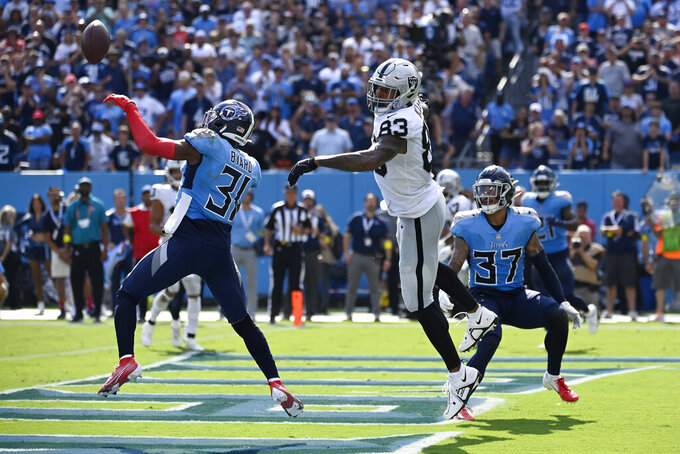 NASHVILLE, Tenn. (AP) — The Tennessee Titans finally made a stand on their home field and got the ball to Derrick Henry along with the rest of their new playmakers to notch their first victory of the season.

Now the road literally gets tougher.

The two-time defending AFC South champs now face the toughest part of their schedule with four of the next five games on the road starting Sunday with a trip to division rival Indianapolis.

Luckily, their bye comes during this upcoming stretch after a much-needed first victory of the season after holding off the Raiders 24-22.

Henry, coming off his best game this season, tapped the cliche of “one game at a time.”

“That’s all you can do ... and be ready for each opponent,” Henry said. “It is just about getting better in all three phases, so we have to take it one game at a time.”

The Titans (1-2) have plenty to work on. Sure, they scored on their first three possessions against Las Vegas and squeezed in a field goal just as the first half expired. They needed every bit of that 24-10 halftime lead.

They were outgained 266-86 in the second half and got nothing from five possessions, including one that ended in a turnover on downs, two punts and then finally a kneel down for the victory.

The offense. Finally. For at least the first half. The Titans had opened their first two games driving for touchdowns only to bog down with just 13 points combined on 20 other drives.

Against the Raiders, they scored touchdowns on their first three possessions — all at least 75 yards or more.

The Titans also got a 48-yard field goal from Randy Bullock that provided the winning edge. The field goal came from almost the same spot where Bullock missed a 47-yarder wide left in a season-opening loss to the Giants.

The Titans must improve on fourth down and stop giving up so many big plays. Mack Hollins had a career-day with 158 yards receiving, including a 60-yard reception, taking away from being nearly perfect on third down, allowing 1 conversion on 12 attempts.

On fourth down, the Raiders were a perfect 3 of 3 — all on the final drive. Only linebacker Dylan Cole, then two-time All-Pro safety Kevin Byard getting a hand on Derek Carr's 2-point conversion pass helped preserve this first victory. The Titans also gave up five plays of 20 yards or longer.

Strange to say about a two-time NFL rushing champ, but Henry. He helped dig the Titans out of an early hole with a 23-yard gain on a screen. He also ran with power and speed, helping dim talk that he's lost something coming off a broken right foot and turning 28.

Henry had his best game yet this season with 85 yards rushing on 20 carries, and he had five catches for 58 yards receiving.

Offensive lineman Dillon Radunz. In a week where the Titans placed two offensive linemen on injured reserve led by three-time Pro Bowl left tackle Taylor Lewan, Radunz wound up not playing even a single snap. That's not a good sign for Radunz or the Titans who made him a second-round draft pick in April 2021.

LB Zach Cunningham hurt a knee in practice Thursday, then went to the locker room with an injured elbow. Starting CB Kristian Fulton went down in the end zone defending a receiver late in the game.

70 — Henry joined exclusive company as only the third player for this franchise to score at least 70 TDs. He now trails Eddie George (74) and Pro Football Hall of Famer Earl Campbell (73).

Become road warriors and try to climb back up the AFC South starting with a trip to Indianapolis. The Titans then visit Washington before their bye followed by trips to Houston and Kansas City. Their fourth home game this season comes Nov. 13 against Denver.