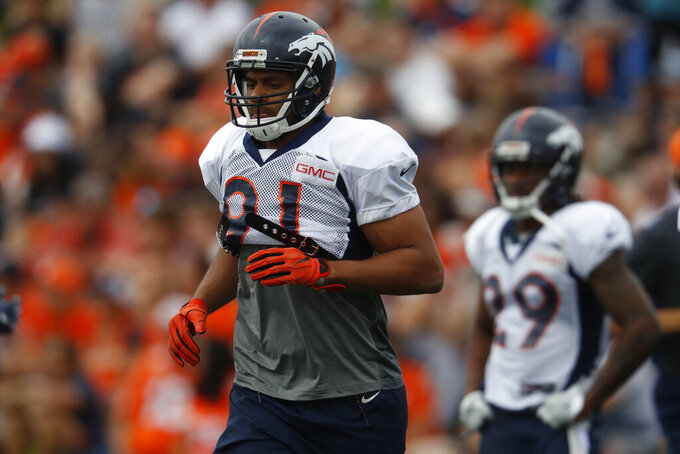 FILE - Denver Broncos linebacker Kasim Edebali (91) takes part in drills at an NFL football training camp, July 29, 2017, in Englewood, Colo. Several German players have had success in the NFL. Edebali's goal as a kid was to play for his hometown Hamburg Sea Devils in NFL Europe. (AP Photo/David Zalubowski) 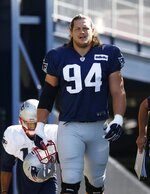 MUNICH (AP) — Germany’s influence on the NFL dates back to the league’s early days when the Nesser brothers played for the Columbus Panhandles.

The NFL maintains a list of 84 players who were born in Germany and played at least one regular-season game.

Many of them, however, lived just a few years in Germany and grew up in the United States — such as the Nesser brothers and Hall of Fame defensive lineman Ernie Stautner.

Pipelines into the league today include the International Player Pathway program, as well as the traditional route of U.S. colleges.

They don't always pan out at the highest level. Wide receiver Moritz Böhringer had no U.S. high school or college experience when the Minnesota Vikings selected him in the sixth round in 2016. He made it to the practice squad.

With the NFL's first-ever regular-season game in Germany on Sunday, here’s a look at some of the German born-and-raised players who have made an impact.

The 6-foot-8 Vollmer grew up in Kaarst and started playing football at age 14 for Düsseldorf Panther of the German Football League. He earned a scholarship to the University of Houston.

Vollmer wasn't invited to the NFL combine before the 2009 draft, but impressed the Patriots in a private workout. New England selected Vollmer in the second round, 58th overall. The 320-pound Vollmer was an AP second-team All-Pro in 2010. He now does broadcasting in Germany.

“Sea Bass” tried to teach Brady some German phrases, but said coach Bill Belichick was not surprisingly less playful. He was grateful the Patriots took a chance on him, though.

The Las Vegas Raiders fullback reached the NFL in 2019 through the league's International Player Pathway program.

The program assigned him to the New England Patriots, where Belichick took note of the 6-foot-3, 255-pound German who delivered crunching lead blocks in preseason games.

In Week 2 of the 2020 season, the Stuttgart native became the first Pathway player to score an NFL touchdown when he caught a 1-yard TD pass from Cam Newton in New England's 35-30 loss to Seattle.

Johnson played for the Stuttgart Scorpions youth team before a high school year in Florida. He played linebacker then tight end at Tennessee, but an injury hurt his draft status.

Johnson explained to NFL Network that he returned home, played a season with the Scorpions in 2018, and trained to become an EMT when he got a call from the Pathway program.

Earlier this year, Johnson became a co-owner of the Stuttgart Surge of the European League of Football.

The Indianapolis Colts selected Werner in the first round, 24th overall, in the 2013 NFL draft.

The Berlin native was a star at Florida State, where as a defensive end he was the ACC's Defensive Player of the Year in 2012. The Colts tried him at outside linebacker, but he struggled with injuries and played only three seasons. He had four sacks in 2014.

Werner does NFL commentary in Germany, where he is a popular media personality.

Edebali's goal as a youngster was to play for his hometown Hamburg Sea Devils in NFL Europe. The defensive end did better than that, signing with the New Orleans Saints in 2014 after going undrafted out of Boston College.

He played 48 games for New Orleans. In his first start for the Saints, Edebali sacked Detroit’s Matthew Stafford twice in a Monday night game in the Superdome. Edebali's eight career sacks are believed to be the most by a German born-and-raised player.

The defensive tackle's four-year NFL career with the New York Giants was highlighted by a touchdown he scored after a fumble recovery against the Tennessee Titans in 2014.

The Giants selected the Weinheim native in the seventh round of the 2012 NFL draft. Kuhn tore his ACL in his rookie year and played 39 games in total. Kuhn is now a popular commentator in Germany.

The Dolphins drafted Von Schamann in the seventh round of the 1979 NFL draft and the “soccer-style” kicker — as they were still called in those days — played six seasons in Miami.

The Berlin — West Berlin back then — native had visited Texas as a teenager and persuaded his mother to move there. He joined the high school team and played collegiately at Oklahoma.

John and Phil Nesser were born in Germany, but raised in Ohio. The played for the Columbus Panhandles in the American Professional Football Association, which became the National Football League in 1922. John made headlines in 1921 when he played at age 45.