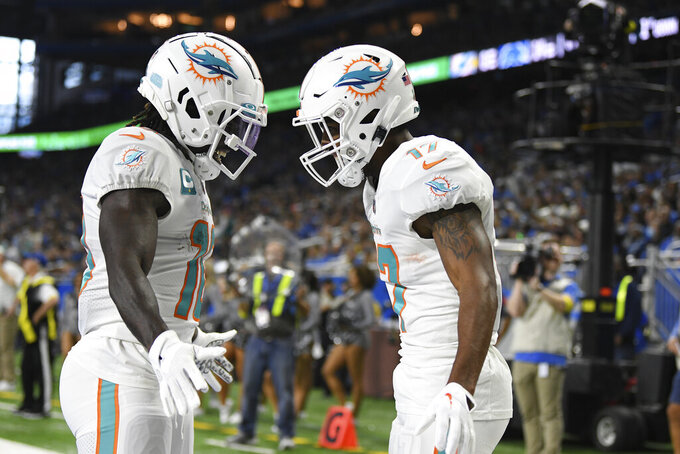 Miami Dolphins wide receiver Jaylen Waddle, right, greets wide receiver Tyreek Hill after catching a 5-yard pass for a touchdown during the first half of an NFL football game against the Detroit Lions, Sunday, Oct. 30, 2022, in Detroit. (AP Photo/Lon Horwedel)

MIAMI GARDENS, Fla. (AP) — A lot of people were shocked when Tyreek Hill, only a few months into his Miami Dolphins tenure, called Tua Tagovailoa the “most accurate” quarterback in the NFL.

Maybe he was on to something.

At the midway point of the season, the highly critiqued Tagovailoa leads the league in several passing categories, despite missing two games, and has steered the Dolphins to a 6-3 record.

The Dolphins were expected to be a much better team this season after adding Hill and other offensive pieces in the offseason. But Tagovailoa has elevated his game, and the Dolphins are clearly better when he’s on the field.

“He’s playing at a tremendous level,” Hill said. “He’s making me look right about everything I said about him in the offseason.”

One of his biggest knocks since entering the league was his deep ball. Now he’s pushing the ball down the field more efficiently than he has in his professional career.

Entering Sunday's game against the Bears, Tagovailoa had twice as many completions (32) to the middle of the field over 10 air yards as any other quarterback this season, according to Next Gen Stats.

“I think I’ve grown a lot with the deep balls, huh? Don’t we think?” Tagovailoa said sarcastically last week. “That was probably a subtle jab, but it was a jab.”

He’s having such a good season that the Dolphins sent away their only 2023 first-round pick, once essential in case they needed to draft another quarterback, to add defensive help.

“The growth has been unbelievable in how he’s playing the position,” McDaniel said of Tagovailoa, “learning the whole system, and then how he’s handling the ebbs and flows of natural in-game momentum.”

Given how the first half of the season has gone, there’s no reason to believe a team has an answer for Tagovailoa’s connection with Hill and Jaylen Waddle. Against the Bears, Hill became the first player this year to surpass 1,000 yards receiving. He’s now at 1,104 on an NFL-leading 76 catches and is on pace for the best season of any wide receiver ever. Waddle doesn’t have nearly the amount of touches (47) as Hill, but has been incredibly efficient with the fifth-most yards receiving in the NFL (812) and six touchdowns.

The defense. Miami’s inability to stop teams has left it in some close games. The Dolphins gave up a combined 91 points in their three losses this year and haven’t generated much pressure with their four-man rush. Miami added former Broncos pass rusher Bradley Chubb, who has 5½ sacks this season, at the trade deadline to address that.

The passing game. Hill and Waddle’s speed in the open field and Tagovailoa’s improvement have elevated Miami’s passing game to a level that hadn’t been seen in recent years. Where the Dolphins defense was once the driving force behind their success, this season the offense is productive enough to outscore its opponents when the defense has struggled.

Cornerback Xavien Howard has been playing through a groin injury and hasn’t had cornerback Byron Jones (Achilles) opposite him. That has clearly affected his play. Howard does not have an interception this season after five last year and 10 in 2020. He did have an interception wiped away by a penalty Sunday, but he also allowed a 16-yard touchdown catch from Justin Fields to Darnell Mooney.

CB Byron Jones, who had surgery on his lower left leg in the offseason, has not returned from the physically unable to perform list.

After their bye-week break, the Dolphins return home to face the Cleveland Browns on Sunday, Nov. 13.