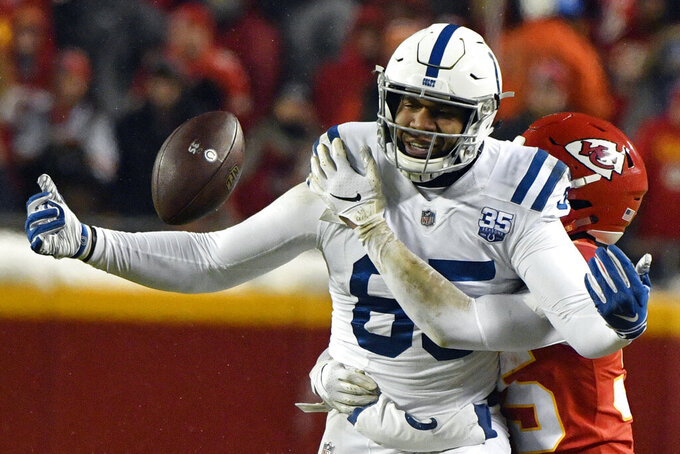 KANSAS CITY, Mo. (AP) — The two transactions that the Kansas City Chiefs made before the start of the season came with little fanfare, mostly because casual football fans probably had never heard of either of them.

Jordan Lucas was drafted in the sixth round out of Penn State by the Dolphins, and had spent most of his career on their practice squad.

But when it became evident in late August that Kansas City might need help at safety, general manager Brett Veach sent a seventh-round pick to Miami for him.

Charvarius Ward went undrafted this past April, overlooked by every team several times. He signed with the Cowboys as a free agent, then was shipped the Chiefs for offensive lineman Parker Ehinger when Dallas decided it needed some help up front.

Two players, acquired one day apart, just may have turned a shoddy Chiefs defense into one that could carry the franchise to its first Super Bowl appearance since January 1970.

Lucas and Ward became dependable pieces in the Chiefs' defensive backfield the final two weeks of the regular season. And on Saturday, they helped shut down Andrew Luck and the Indianapolis Colts in a 31-13 victory that sent the franchise to its first AFC title game in 25 years.

"I think some of the young guys are maturing right in front of our eyes," said Chiefs coach Andy Reid, whose team will face the New England Patriots at Arrowhead Stadium next Sunday.

His defense had been seen as the biggest vulnerability all season, particularly as the Chiefs' offense shattered all kinds of franchise records. The only games they lost came in shootouts against the Rams, Patriots and Seahawks — on all three occasions their defense giving up a boatload of points — and when Kansas City couldn't stop Philip Rivers and the Los Angeles Chargers in the fourth quarter.

It was after that game against the Chargers that Reid made a bold personnel move: He benched cornerback Orlando Scandrick and safety Ron Parker, a pair of veterans that had started all season, in favor of Lucas and Ware, a pair of relatively untested youngsters.

They had some growing pains the following week in Seattle, but Reid stuck with them, and they showed significant growth the following week. The Chiefs shut down Derek Carr and the Oakland Raiders in a Week 17 victory that they needed to wrap up the AFC West and No. 1 seed.

Their growth continued in leaps and bounds against the Colts.

Ward was picked on early and came up with several big breakups, and Lucas patrolled the middle of the field like a savvy center fielder. Together, they helped the Chiefs hold Luck to 203 yards passing, and kept Indianapolis from scoring an offensive touchdown until late in the fourth quarter.

"At the end of the day, this is something we love to do, something we get paid to do," Lucas said afterward, "so we have to go out there and give Chiefs Kingdome something we haven't had in 25 years, and it's special. We're just looking to keep building."

It's particularly special given the alternative.

Lucas came from a Dolphins team that went 7-9, missed the playoffs and fired its coach, while Ward joined from a Cowboys team that was bounced from the playoffs by the Los Angeles Rams on Saturday night.

Neither could have imagined playing for an AFC title with the Chiefs back in August.

It's been a blessing for the Chiefs, too.

Part of the reason their defense has struggled all season is the fact that Eric Berry, their star safety and emotional leader, has been sidelined with a heel injury. Berry tried to come back late in the season, only for the injury to flare up again, and was inactive against the Colts.

Lucas has filled in admirably alongside fellow safety Daniel Sorensen.

The improved play by the Chiefs' defensive backfield the past few weeks has paid dividends up front, too, allowing defensive tackle Chris Jones and linebackers Justin Houston and Dee Ford to terrorize opposing quarterbacks. Houston had a pair of sacks and Ford had a strip-sack Saturday, and Jones applied enough pressure up the middle to flush Luck from the pocket on several occasions.

When asked what has changed, Ford replied: "Time. Persistence."

"We had a lot of new faces and we just kept working," he added. "Kind of filled in the gaps as we went along and guys stepped up and sort of understanding the defense. We just kept stepping up."

Now, the Chiefs have to step up one more time to earn a trip to the Super Bowl.