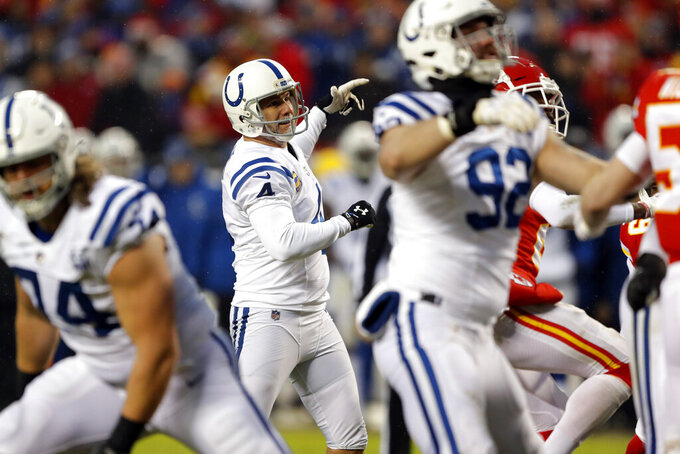 KANSAS CITY, Mo. (AP) — The Colts finally got their offense going against the Kansas City Chiefs late in the first half Saturday, driving deep downfield with an opportunity to bite into their deficit.

Andrew Luck scrambled out of bounds with a few seconds left, and Colts coach Frank Reich sent one of the most reliable kickers in NFL history out to attempt a 23-yard chip-shot field goal.

Adam Vinatieri doinked it off the left upright .

Instead of taking some momentum into the locker room on a cold, snowy afternoon, the Colts trudged there facing a 24-7 deficit. They wouldn't score on offense until Luck connected with T.Y. Hilton with 5:31 left in the game, and by that point the Chiefs were skating toward a victory.

They wound up winning 31-13 to reach their first AFC title game since January 1994.

"It was tough conditions out there I think for kicking," Colts coach Frank Reich said. "I don't know the specifics, but it was just one of those days. It was all three phases. It seemed like that was indicative of we were going to make a mistake like that in all three phases."

Meanwhile, the Chiefs ended years of postseason disappointments against Indianapolis, including two playoff losses at home. There was the game Lin Elliott missed three field goals, the infamous no-punt game, and the night five years ago that Luck rallied Indianapolis from a 38-10 second-half hole.

He wasn't able to engineer another comeback this time.

Vinatieri, meanwhile, was a microcosm of a day in which little went right. Even when the Colts finally made the end zone, the veteran of 27 previous playoff games proceeded to miss the extra point.

"That's a momentum swing. Needing those points going into half, I didn't come through for us," he said. "The second one was just, I don't know. I'll go back and look at that one."

Luck, whose offensive line had kept him remarkably clean during a five-game win streak, spent the entire game with linebackers Dee Ford and Justin Houston in his face. He was sacked three times, hit twice that many, and had what seemed like a dozen passes batted at the line of scrimmage.

Marlon Mack fared no better on the ground as the Colts were forced to play from behind from the opening minutes. After running for a franchise playoff-record 148 yards last week against Houston, he was held to 46 yards rushing by the league's worst run defense, and ultimately left with a hip injury with the game decided late in the fourth quarter.

"All of us had a fair amount of confidence coming into the game that we could do something," Luck said. "and we didn't. And we know this game punishes you quickly. We know how hard it is for everybody to be on the same page every play. And we weren't, and it shows up in the final score."

The Colts' defense, so pivotal in their rebound from a 1-5 start, had no answers for quarterback Patrick Mahomes and the Chiefs' vast array of offensive options. They allowed Kansas City to score on its first three possessions, and at one point the Colts were being outgained 185-12.

The Chiefs' Damien Williams, who at one point was the No. 3 running back in Kansas City, gouged a Colts defense that had not allowed a 100-yard rusher this season for 129 yards and a score.

Tight end Travis Kelce, who feasts on cover-two defenses, made Indianapolis pay for its gaps downfield. He caught seven passes for a game-high 108 yards, several of them to convert first downs.

Wide receiver Tyreek Hill, one of the fastest players in the NFL, kept running away from would-be tacklers. Hill caught eight passes for 72 yards, took a 36-yard sweep for a touchdown, and set the tone with his energetic pregame warmup and circus-style introduction.

Even when the Colts defense did make a play, such as Darius Leonard's strip and recover of Sammy Watkins' fumble deep in Kansas City territory, their offense failed to capitalize. Luck fumbled the ball right back to foil an opportunity to close within 24-14 late in the third quarter.

They wound up never getting that close the rest of the way.

"We keep using this illustration of climbing the mountain, Mount Everest," Reich said. "What we said in there was it's hard to climb Mount Everest your first time that you go to climb it. We didn't make it all the way to the top this year, but we made it up that mountain pretty far."