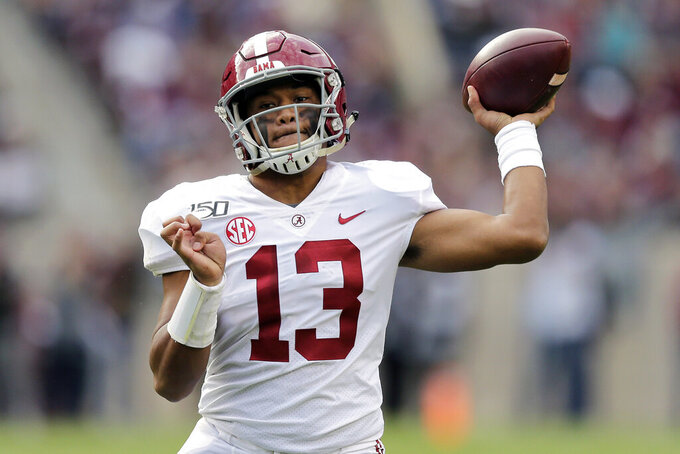 The NFL's shutdown because of the coronavirus pandemic is denying teams the opportunity to get face time with draft prospects who have been injured, have checkered pasts or are under the radar.

Those players are at risk of being selected lower in the draft than they would be in a normal year.

“That’s definitely a factor for some of these guys,” Baltimore Ravens general manager Eric DeCosta said. “It’s really been up to the individual teams, and the agents and the players to find a way to get us all of the information that we require.”

Those who performed poorly at the scouting combine in February won't get another opportunity. Those who skipped drills at the combine because of injury or other reasons won't get a pro day or private workout.

And those who had off-field issues won't be able to polish their images during in-person interviews that are more in-depth than meetings at the combine.

The NFL on March 13 barred all in-person pre-draft visits, effectively canceling pro days and prospects' visits to team headquarters. Only a handful of pro days had been held.

Prospects and their agents have gotten creative, sending teams videotapes of workouts. Zoom or Skype has been the medium for interview, and teams have worked with college athletic training staffs to procure as much detailed medical information as possible.

“This is such a strange draft,” said NFL.com analyst and former Dallas Cowboys player personnel director Gil Brandt a Pro Football Hall of Famer. "Where you used to be able to accumulate numbers to predict success or failure, there’s a limited amount of those numbers available. There are some good players in the draft who all look alike, and that’s where the more information you get, the better off you are as far as picking one over another.”

Some players who could have been well-served with more personal contact with teams:

If not for the gruesome hip injury he suffered Nov. 16, Tagovailoa would be the first or second overall pick. Now there's debate whether he or Oregon's Justin Herbert will be the second quarterback taken after LSU's Joe Burrow.

Medical reports were upbeat at the combine. Though it's been suggested he'll need to sit out the 2020 season to truly get back to full strength, agent Leigh Steinberg told the AP: “His health is just fine. There’s two doctors that have seen him, Dr. Lyle Cain (Alabama’s orthopedic surgeon), and Dr. Chip Routt, who performed the surgery. Both have said that he is healthy and he’ll be lively and ready to go for training camp and the likelihood of recurrence is very low.”

But he also has had two ankle injuries and played through a broken finger and knee injury. It would have helped for him to get in front of team doctors.

No one will see him work out in person, either, though his prodigious on-field production speaks for itself. Alabama's March 24 pro day was canceled, and he had to call off an April 9 workout he planned for scouts.

Surgery for a groin injury kept Davis out of the Senior Bowl and from drills at the combine. He went through medical checks in Indianapolis and planned to flash his speed at Cal’s pro day on March 20 and in private workouts. The cancellations cost the Pac-12 hurdle champion a chance to challenge Javelin Guidry’s 4.29-second 40, the fastest by a defensive back at the combine.

O’Grady comes with baggage, and he didn’t distinguish himself at the combine. Then he chose to not participate in a pro day March 11. He set the Arkansas career record for touchdowns by a tight end and meets the eye test. But he has a drunken-driving arrest and was suspended three times before he was dismissed in early November. He's unable to personally show teams he’s cleaned up his act, though he did say at the combine his dismissal stemmed from his immaturity.

Higgins’ 6-foot-4 frame and superb hands stand out in a deep pool of receivers. Speed is the question, and a private workout might have helped. He sat out drills at the combine, saying he hurt his groin two or three weeks earlier, and he said he aggravated the injury while running a 4.54 40 at his March 12 pro day.

The first-team All-American wasn't invited to the combine and had his April 1 pro day canceled. The 6-4, 321-pound guard has raw power and a high ceiling. Even though he got a long look from scouts at the East-West Shrine Game, he surely would have benefited from a pro day and team visits.

Shenault had surgery to repair a core muscle injury a few days after he ran a 4.58 40 at the combine, and he wasn't able to do drills at Colorado's pro day March 11. He's also had shoulder and toe injuries, so there are durability questions. The versatile playmaker looked like a first-round pick after his breakout season in 2018. His health, coupled with his production falling off last year, might keep him on the board longer than he expected.