Wims' punch part of another tough third quarter for Bears 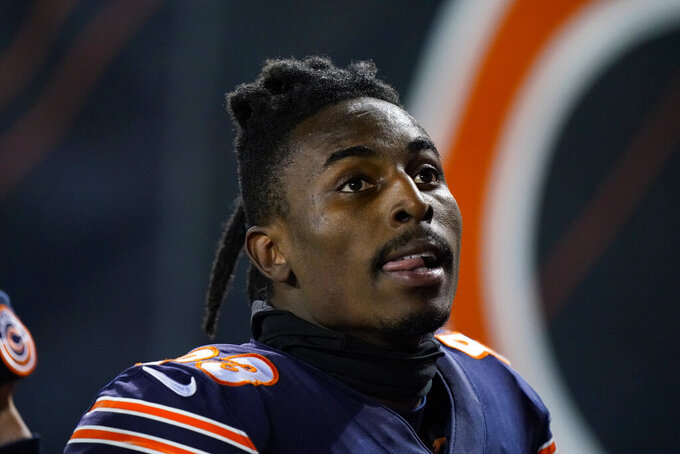 Chicago Bears wide receiver Javon Wims (83) walks to the locker room after being ejected for unnecessary roughness in the second half of an NFL football game against the New Orleans Saints in Chicago, Sunday, Nov. 1, 2020. (AP Photo/Nam Y. Huh)

CHICAGO (AP) — Javon Wims walked right up to C.J. Gardner-Johnson and took a swing. Then he threw another punch before he got tied up as each team flocked to the scrum.

Just another ill-advised move for the Chicago Bears in the third quarter.

The slumping Bears had another ugly third period during Sunday's 26-23 overtime loss to the New Orleans Saints. Wims was ejected right before Nick Foles threw an interception that turned into Wil Lutz's tiebreaking 39-yard field goal with 5:04 left.

Chicago (5-3) had just 43 yards during the scoreless quarter despite receiving the second-half kickoff. It has been outscored 49-7 in the third on the season.

“The start of that third quarter, I didn’t like, I don’t like,” coach Matt Nagy said, “and it’s been a theme. So trust me, we’re looking at it. We’ve done different things in how to adjust that, and it’s weird that it just keeps happening.”

Even with the empty third period, the Bears were right in the game heading into the fourth — thanks to their stout defense. The Saints opened a 23-13 lead on Drew Brees' 20-yard touchdown pass to Taysom Hill with 9:57 left, but Foles found Darnell Mooney for a 3-yard TD and Cairo Santos kicked a tying 51-yard field goal with 13 seconds to go.

Each team touched the ball in overtime before the Saints drove down the field for the winning score. Alvin Kamara's 20-yard run helped set up Lutz's fourth field goal, a 34-yarder with 1:36 remaining that handed the Bears their second straight loss.

“This is a tough one to lose, but at the end of the day I believe the people in this organization are going to coach us the right way, in a positive way and move forward,” Foles said. “Because there were good things tonight and we were very close.”

The third quarter took a turn for the worse for Chicago with a pair of penalties on its first drive, a delay-of-game call on third-and-4, and a false start on Cordarrelle Patterson on a punt attempt. Foles also was sacked by Malcolm Jenkins in between the flags.

Deonte Harris returned the punt 42 yards to the Bears 16. But the Saints stalled, leading to Lutz's tying 27-yarder.

After Chicago took over, Foles passed to Allen Robinson for a 5-yard gain on first down. On the other side of the field, Wims walked up to Gardner-Johnson and threw two punches, leading to his ejection.

It was unclear what exactly led to the outburst by Wims, a third-year receiver who was selected by the Bears in the seventh round of the 2018 draft. The 26-year-old Wims could be looking at a suspension by the NFL.

“We’ve talked to him and told him that that’s not how things go here,” Nagy said. “One of Javon's strengths is his character and who he is as a person, and he's since apologized, but you don't have that. There's no part of that in this game.”

Wims' penalty pushed the Bears back to a second-and-20, and Foles was intercepted by Marshon Lattimore on the next play. But Chicago's defense stepped up again, and New Orleans settled for another field goal by Lutz.

“We’re an elite team and we can play at a high level,” Bears defensive tackle Akiem Hicks said. "The consistency behind that is something we need to improve throughout the course of the game.”

Hicks said he didn't see Wims' play, but he heard about it.

“Knowing the character of Javon, I know that he doesn’t want to have a situation that might go sour,” he said. "With a lot of respect for him, I understand that things happen and we’ll move forward.”