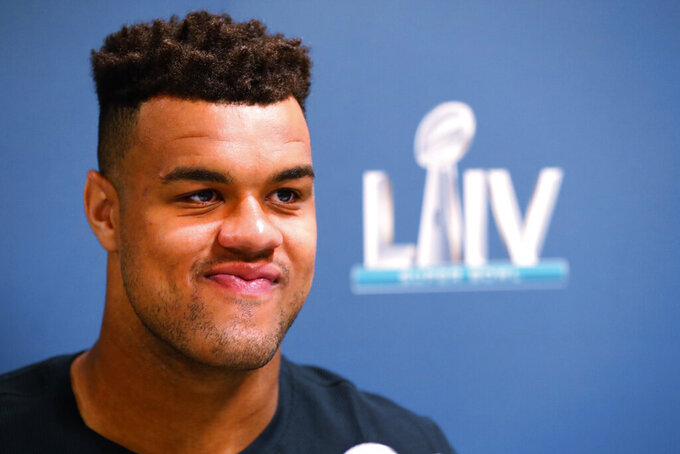 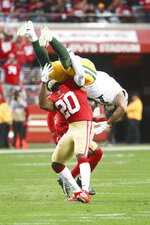 The former first-round picks struggled through the starts of their careers as they battled through injuries and bounced around positions in search of the best role.

Everything has fallen into place for both Ward and Armstead this season as they have anchored a defense that has San Francisco one win away from its record-tying sixth Super Bowl title.

But for the two players who have gone from perceived busts to stars this season, none of that will matter if they can't cap it with a win over the Kansas City Chiefs on Sunday.

"We're nobody until we earn it," Ward said. "To be honest, if we lose this game, we're nobody. Nobody will never know us in history."

The two defensive standouts appeared on their way to forgettable careers with Ward missing 29 because of a variety of injuries his first five seasons and Armstead ending the 2016 and '17 seasons on injured reserve and making little impact when healthy.

Their performances were so pedestrian that many questioned the decisions when Armstead returned this season on the fifth-year option worth more than $9 million and Ward signing a one-year, $4.5 million deal to remain in San Francisco as a free agent.

"I have always believed in myself," Armstead said. "But being a part of this team and around these guys has been so special for me this year. We enjoy being around each other so much and playing together, we have a lot of fun out there and you can't take that for granted."

Ward has been a big part of the NFL's stingiest pass defenses in the past 10 years. After moving around his first few years from outside cornerback to the slot to safety, Ward has found a home as the deep safety in San Francisco's pass defense.

He has the speed to cover lots of territory and delivers big hits as well. He's a major reason why San Francisco allowed only eight completions on passes that traveled at least 20 yards downfield in the regular season, the fewest in the NFL over the past 14 seasons, according to SportRadar.

"Jimmie Ward is one of the most underrated guys on our team," cornerback Richard Sherman said. "For a long time he's been kind of the stepchild here because he's been forced to play so many positions and play out of position so many times. He's made no excuse. He's fought as long as he can as hard as he can and for a guy who puts his body on the line and done everything for this organization, he deserves a ton more credit as well from just the fans. You don't like how the fans talk about it. ... He's put the time in, the effort in, he's battled back from injury. They're like, 'He's always hurt.' A guy who's always hurt it's because he puts his body on the line."

Durability has always been the biggest knock on Ward, who missed time in his career for injuries to his foot, quadriceps, collarbone, hamstring and forearm.

That appeared to be what was in store this season when he broke his collarbone again during the offseason program but he was ready to play by the fourth game and is second on the team in defensive snaps since then.

"It's been great to see that," said fellow safety Jaquiski Tartt, a teammate of Ward's in high school in Alabama. "A lot of people have doubted him since getting to the NFL. He's played well. It wasn't unexpected. Of course it got to him. He shut it out and he came out this year and balled."

Armstead has done the same, transforming himself from a player who had little impact his first few years into one who repeatedly made splash plays this year.

Part of the league's top defensive line alongside fellow former first-round picks Nick Bosa, Dee Ford and DeForest Buckner, Armstead was the most consistent of the bunch.

Armstead led the team with 10 sacks and ranked second with 35 pressures despite playing significant time on the inside and also was a force against the run.

"He's playing on a whole different level this year," said Buckner, his former teammate in college at Oregon. "He's definitely had some adversity throughout his career. Just to see him having the season he's having right now, it's finally coming all together for him."