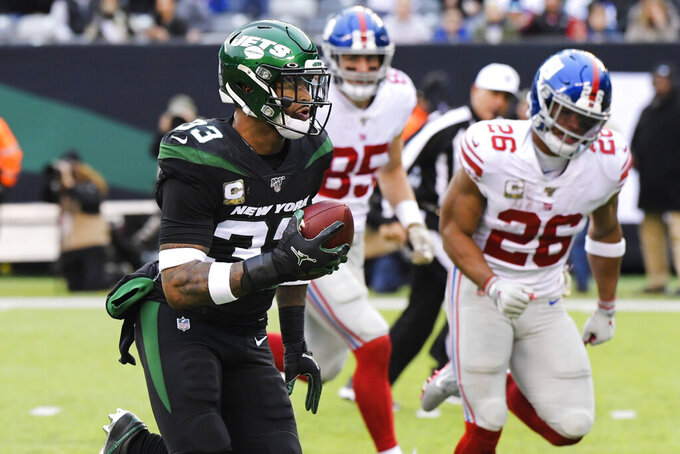 FILE - In this Nov 10, 2019, file photo, New York Jets strong safety Jamal Adams (33) runs past New York Giants' Saquon Barkley (26) for a touchdown during the second half of an NFL football game in East Rutherford, N.J. A person with direct knowledge of the situation says Adams has requested a trade from the Jets amid a contract dispute. (AP Photo/Bill Kostroun, File)

NEW YORK (AP) — A person with direct knowledge of the situation says All-Pro safety Jamal Adams has requested a trade from the New York Jets amid a contract dispute.

The 24-year-old Adams has been seeking a contract extension, and the Jets have said they want the safety to remain a member of the team his entire career. But, the conflict apparently is about the timing: Adams wants the extension now, while the team prefers to wait until next year, at the earliest.

The person spoke to the AP on condition of anonymity Thursday because neither Adams nor the team announced the player's trade request. ESPN and the New York Daily News first reported Adams seeking a trade.

The Jets are in no rush to address Adams' contract because they hold rights to the safety through next season and could also potentially use the franchise tag on him in 2022. But, it appears Adams is now trying to force the team's hand to get the new deal he covets.

Through social media, Adams has made his frustration at the team's slow pace in addressing his situation well known. On Thursday, he responded to a comment on Instagram and indicated that he might be looking to play elsewhere.

“Maybe it's time to move on!” Adams said in the post.

Adams also recently accused the Jets of “a lot of talk, no action” on another Instagram post.

Meanwhile, the team's stance — that it wants to have Adams on the team his entire career — has not changed.

Adams was drafted by the Jets with the sixth overall pick out of LSU in 2017. He quickly became one of the faces of the franchise and the team's best all-around player. Adams has made the Pro Bowl the last two seasons and is generally regarded as arguably the league's top safety.

He's now looking to be paid as such.

Adams skipped the Jets' voluntary offseason program, a clear sign he was unhappy. And, it's not the first time he and the Jets — including general manager Joe Douglas and coach Adam Gase — have not seen eye to eye.

Last October, Adams was angry when reports surfaced that Douglas fielded phone calls from other teams asking about the safety's availability in potential trades. While Douglas set an exorbitant price tag for his star player, Adams criticized the GM and the team for even speaking with other teams.

Adams refused to speak to Douglas or Gase for a week before the sides sat down — following the safety speaking to team chairman and CEO Christopher Johnson.