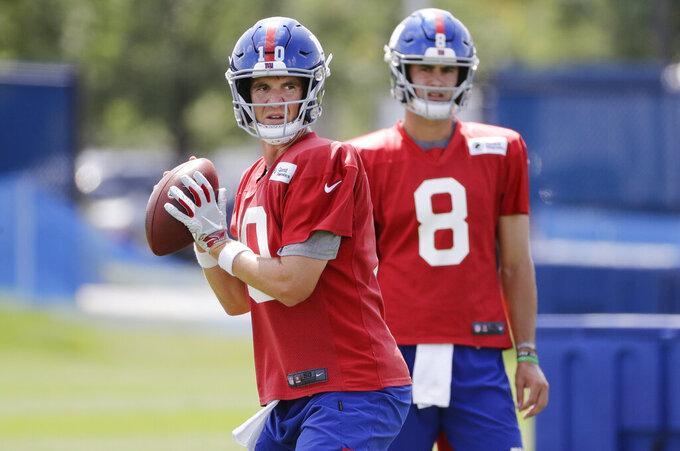 EAST RUTHERFORD, N.J. (AP) — Eli Manning isn't using either the last year of his contract or the presence of heir apparent Daniel Jones as his motivation for the upcoming season.

The 38-year-old New York Giants quarterback has something more personal pushing him. The two-time Super Bowl winner wants to relive the feeling of winning and what it does for a team.

No more 5-11 or 3-13 seasons, like the past two. He wants to be around a team that is enjoying itself, competing every week and celebrating.

That's been a rarity for the Giants, who have made the playoffs once since winning their fourth Super Bowl — and second with Manning — in 2011.

"It's a desire to win," Manning said Tuesday as the Giants returned to work for their second week of training camp. "It's a desire to taste that feeling of winning games and what that feels like in the locker room. What it feels like to get on a hot streak and win four or five in row, the attitude of winning a playoff game and what that feels like, and winning a championship, the feelings you get to go through in those scenarios. That's more the motivation than to prove someone wrong."

Manning, who will have a team-high $23.2 million salary cap hit this season, has his share of critics. They question his arm strength. Many wonder whether the game has passed him as he enters his 16th season because he does not fit into the mold of being a mobile quarterback. He can't extend plays the way Patrick Mahomes of Kansas City does.

Hall of Fame quarterback Kurt Warner, whom Manning replaced after nine games into his rookie season in 2004, said the mobility will not be a major issue if the Giants' offensive line can give him time to throw. He has always been at his best when he can stay in the pocket and see the field.

Manning has altered his training heading into this season, hiring Mickey Brueckner of Chatham, New Jersey, as his personal trainer.

Brueckner owns CrossFit Annex and teaches Olympic lifting and other skills. He has been working with Manning on more baseball exercises, focusing on shoulder, rotator cuff, core and leg workouts.

"I worked hard on the weight training parts of it, keeping my legs strong and getting healthy and getting things working properly, arm care," he said. "Keep my arm strong or improve my arm strength at this level. I feel like it paid off. I am throwing the ball well and staying strong."

There was no slip in his arm strength after four straight days of practice last week, he said.

Coach Pat Shurmur has noticed the change in Manning. He also sees a more comfortable player heading into his second season running the offense.

"We can come out and say, 'We're going to run this play,' and I can say, 'Hey listen Eli, if it's Cover Two, let's check it to this,'" Shurmur said. "And we don't even have to have practiced it. We can just call it in the huddle and get it done."

Manning feels the offense is well ahead of where it was last year and the line will be better with guard Kevin Zeitler and tackle Mike Remmers taking over on the right side.

The only problem on Tuesday was the heat, which had an index close to 100 degrees.

"It's almost become a wet ball drill with these snaps on a hot day with the centers and what is going on with them," Manning said. "You are not always going to get a dry ball and conditions aren't always going to be perfect."