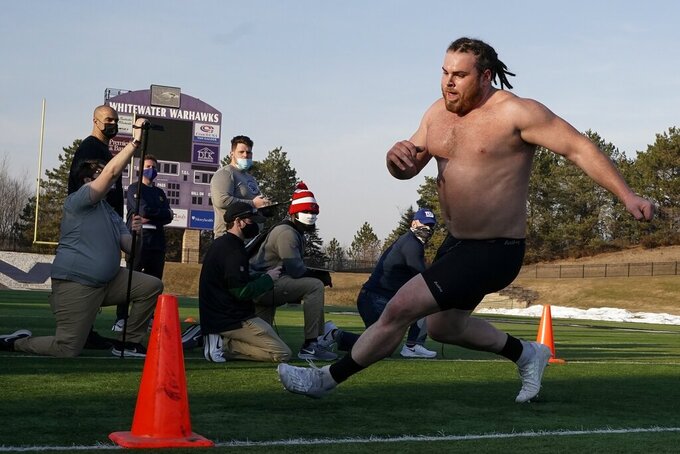 Those diamonds in the rough selected in the late rounds of NFL drafts or signed as undrafted free agents are more like hidden gems this year.

Fewer schools outside the Football Bowl Subdivision hosted pro days this year, meaning college players from smaller schools with NFL hopes didn't get the same exposure they would have otherwise from campus workouts in front of scouts.

Only three Football Championship Subdivision schools and one in Division III had pro days scheduled compared with 48 in the FCS and nine in Division II in 2019, the last year with a draft leadup unaffected by COVID-19.

“The only guys from small schools that will get that opportunity are the dominant guys that are first-day or next-day guys. Everybody knows who they are. Those guys get an opportunity and the scouts see them, but it’s that one diamond in the rough that we’ll allow to come.”

For the second straight year, NFL teams cut back on travel for scouts and personnel people as a precaution against COVID-19. With the February scouting combine in Indianapolis canceled, the importance of pro days was heightened, and smaller school players with established profiles were directed to the nearest big school pro days.

Another pandemic-related reason for fewer pro days was that many non-FBS schools that typically host them did not this year because their teams are playing this spring after having their fall seasons postponed.

“Is this maybe a year some of those later rounds there are less diamond-in-the rough picks? Potentially,” said Wisconsin-Whitewater tight ends coach and director of operations Tim Shields, a former player agent.

Division III Wisconsin-Whitewater held a pro day that drew representatives of all 32 teams but only because its Senior Bowl revelation, offensive lineman Quinn Meinerz, warranted a closer look after Whitewater did not play in the fall.

About 230 players lost opportunities for exposure with the cancelation of two all-star games, the East-West Shrine Bowl and NFLPA Collegiate Bowl. The NFLPA and Shrine games attract a bountiful number of third-day draft prospects or undrafted free agents.

Kansas City Chiefs defensive end Tershawn Wharton out of Division II Missouri-Rolla was one of those undrafted free agents who was discovered in the 2020 Shrine game.

“These guys pop off the screen and they make you go back and look at their tape and you’re kind of anxious for their pro day to come and see what they run and jump,” Chiefs general manager Brett Veach said. “That will be the challenge."

Wharton would have been at Missouri Western's pro day last year if it had not been canceled, so his invitation to an all-star game proved especially valuable.

“I hope we get it back next year,” Horn said, “and kids can get the opportunity to play at the next level.”

New York Giants general manager Dave Gettleman said even though the pandemic caused many pro days to be canceled last year, as it did this year, the task of evaluating 2021 prospects is more difficult.

“Last year, despite the fact the world essentially closed down mid-March, we had already had Indy, we had the all-star games and obviously had a full college season with full normal access,” Gettleman said.

At pro days this year, teams were limited to having three people attend, scouts often had to watch from the stands instead of on the field and face-to-face conversations with players usually weren't allowed.

Teams adjusted, using videoconferencing to interview prospects, and they worked with schools to mine medical information.

Though some of the better-known players from small schools were able to get into pro days, what about those sleepers who don't have much of a profile?

One of those was Dennis Gardeck, a linebacker at the University of Sioux Falls in South Dakota in 2017. He won his share of awards at the Division II level, but he was an unknown until his coach got him an invitation to the pro day at South Dakota State.

Gardeck simply dazzled. He had a 4.57-second 40-yard dash and 36.5-inch vertical jump to go with the 31 repetitions he did in the 225-pound bench press. The Arizona Cardinals signed him as an undrafted free agent and he's played in 44 games the past three seasons. He earned $750,000 last year, when he was second on the team with seven sacks.

“His opportunity came specifically because of what he did at his pro day,” Sioux Falls coach Jon Anderson said. “I feel bad for this year's guys and even last year's guys who didn't get opportunities for pro days. There are probably a lot of guys out there who are diamonds in the rough that have the ability to play that haven't been given the chance.”