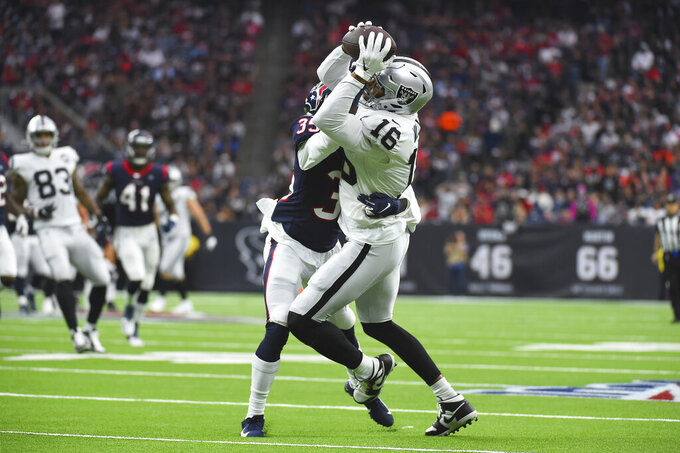 Oakland Raiders wide receiver Tyrell Williams (16) is hit by Houston Texans defensive back Keion Crossen (35) after a catch during the second half of an NFL football game Sunday, Oct. 27, 2019, in Houston. (AP Photo/Eric Christian Smith)

But after winning two of five games during a 48-day stretch without a true home game, the Raiders still find themselves in contention in the AFC despite falling just short Sunday with a 27-24 loss to the Texans.

Now they begin a three-week stretch without leaving Oakland starting Sunday against Detroit, much to the delight of coach Jon Gruden.

"I'm going to actually have dinner with my wife Friday night. I kind of miss her," Gruden said Monday. "It's been tough. I've sarcastically had fun with it. I've never seen a team go six weeks without a home game, but we were able to withstand it. We won two out of five. We would've liked to win three out of five, but our guys are playing hard. I think all the travel helped our team bond a little bit. It'll be pretty neat to play in our home stadium."

Since last playing at home in a 28-10 loss to Kansas City on Sept. 15, the Raiders (3-4) got blown out in Minnesota, won back-to-back games in Indianapolis against the Colts and in London against Chicago, then were outmatched by star quarterbacks Aaron Rodgers in Green Bay and Deshaun Watson in Houston the past two weeks.

It has been so long that 10 players on the current 53-man roster have yet to play a regular-season home game in Oakland.

"Tiring. And I try and do a really good job of nutrition, sleep, all that kind of stuff, taking care of my body and all that kind of stuff, but those miles add up, man," quarterback Derek Carr said. "I'm glad that I feel I'm done with it, that's for sure. But there's no excuse. Like come game time I felt great. I felt fine. But after a while you're like, another trip, like another Friday we have to leave. Kind of want to take my wife on a date, if I'm being honest. You know, I think being able to be at home, sleep in our bed, extra night or two is going to be really good for our team."

Carr is playing his best football since 2016, looking extremely comfortable in Gruden's offense. He threw for 285 yards and three TDs without a turnover against the Texans and ranks second in the league with a 110.1 passer rating over the past six weeks.

For the second straight week Gruden challenged an offensive pass interference call to no avail. Using up that challenge in the first half might have contributed to Gruden's reluctance to challenge a spot in the third quarter when Houston's Duke Johnson appeared to be stopped short of a first down on a third-down pass. The officials gave Johnson a favorable spot and the Texans scored a TD five plays later to cut Oakland's lead to 21-20.

"I'm not very good at challenges," Gruden said. "I threw the flag very well, though, yesterday. I launched it. I have people up in the press box that are helping me. At that point and time I didn't feel like it was a challenge we had a chance to win based on the information that I had."

Rookie receiver Hunter Renfrow had his most productive day as a pro. He caught a 65-yard TD pass to open the scoring and added three more catches for 23 yards.

Receiver Tyrell Williams returned after missing two games with a foot injury and had a 46-yard touchdown catch. But it was a couple of missed opportunities on Oakland's final drive that really resonated. Williams dropped a deep pass with about five minutes remaining on first down from the Houston 45. Williams then had his hands on a third-and-16 deep ball a few plays later only to have former teammate Gareon Conley break it up. The Raiders then punted and didn't get the ball back.

X-rays on center Rodney Hudson's ankle were negative, but Gruden didn't know how serious the injury was. Linebacker Justin Phillips went down with a season-ending knee injury and DE Josh Mauro (groin) and returner Dwayne Harris (ankle) were getting checked out.

The Raiders begin a three-game homestand Sunday against Detroit.