After weeks of magic Wilson, Seahawks falter vs. Ravens 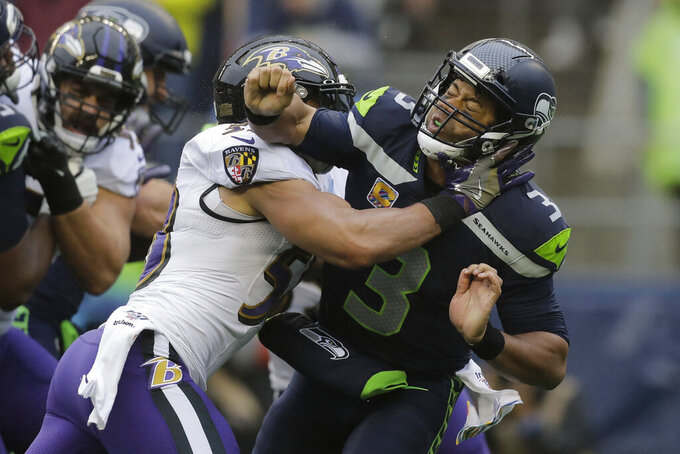 Seattle Seahawks quarterback Russell Wilson (3) is hit after he passed under pressure from Baltimore Ravens linebacker L.J. Fort, left, during the first half of an NFL football game, Sunday, Oct. 20, 2019, in Seattle. (AP Photo/John Froschauer)

SEATTLE (AP) — Expecting Russell Wilson to remain perfect for an entire season, let alone another week, was unrealistic. At some point there was going to be a mistake.

With how well Wilson had been playing through the first six weeks of the season, a deflected pass or some kind of fluky play would make sense as the reason behind the mistake. What was not expected was Wilson's first interception coming on a throw that looked like disaster the second it left his hand. That pick was a turning point in Seattle's 30-16 loss to Baltimore on Sunday.

Wilson was late with his decision. He threw into a risky area. And he failed to see Marcus Peters waiting to break on the ball. What was a 10-6 lead for the Seahawks — and likely about to increase — suddenly became a 67-yard interception return touchdown, a lead for the Ravens and a massive momentum shift.

"You've got to move on and keep your head down and sometimes you just focus on the next play and expecting a lot of great things to happen after that," Wilson said.

Except those great things Wilson hoped for never materialized. The Seahawks never found the end zone in the final 2½ quarters. They managed just 61 total yards and five first downs before their final drive of the game when facing a 17-point deficit. Wilson was sacked once, but hit eight times with seven of them coming in the second half as Baltimore brought a series of pressures Seattle struggled to block.

What was supposed to be a showcase of two early MVP candidates between Wilson and Baltimore's Lamar Jackson became completely one-sided.

"He's going to be Russ and he's going to be all right," Seattle center Justin Britt said. "We're going to get back to it and do our job to protect and keep him cleaner. He'll be all right. He's still the best quarterback in the league. I really believe that he's our leader."

Wilson finished 20 of 41 for 241 yards and an 8-yard TD pass to Tyler Lockett in the first quarter. It was the only time Seattle found the end zone, and Wilson finished below 50% completions for the first time since Week 15 of the 2017 season, when he completed 14 of 30 passes in a loss to the Los Angeles Rams.

Wilson was hardly the only reason Seattle fell to 5-2. Jackson did plenty by himself, rushing for 116 yards and a touchdown, while also making several key throws in the passing game. Seattle's run game managed just 106 total yards and the Seahawks attempted only 26 runs compared to 41 passes.

"We put ourselves in really great positions early on," Lockett said. "I just think the second half Baltimore switched up a lot of stuff. They played different types of defenses that they didn't in the first half. I think they did a really good job adjusting, kind of putting us in an awkward position."

But turnovers shine and Wilson's interception was the first of two the Ravens returned for touchdowns. DK Metcalf fumbled in the fourth quarter and Marlon Humphrey took it 18 yards to the end zone.

Wilson has thrown just eight total interceptions over the past two seasons, but three have been returned for touchdowns — last year in Week 2 against Chicago by Prince Amukamara; Week 9 of last season by the Chargers' Desmond King; and Sunday by Peters.

"Somewhere you have to make a mistake. How many games are you going to go without making an error like that?" Seattle coach Pete Carroll said. "Everybody in the locker room knows it. Russ said something after the game and they told him, 'Don't worry about it.' They understand there is a burden to that, but we've seen Russ do so much, that was just bad luck."