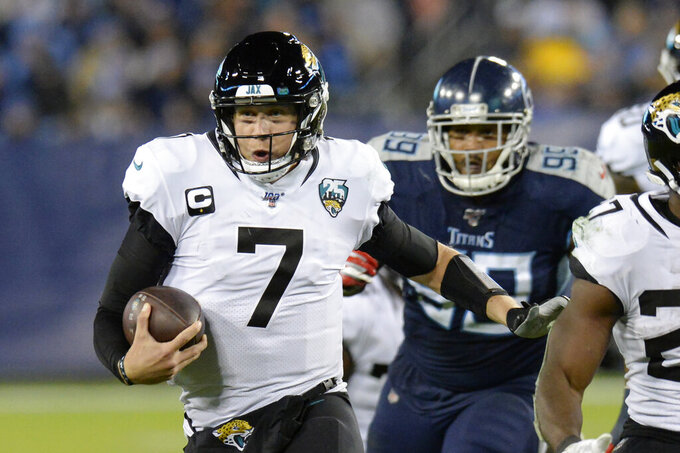 FLE - In this Nov. 24, 2019, file photo, Jacksonville Jaguars quarterback Nick Foles (7) scrambles against the Tennessee Titans in the second half of an NFL football game in Nashville, Tenn. A person familiar with the trade says the Jacksonville Jaguars have agreed to send quarterback Nick Foles to the Chicago Bears for a compensatory fourth-round draft pick. The person spoke to The Associated Press on condition of anonymity because trades don't become official until the league year begins later Wednesday, March 18, 2020. (AP Photo/Mark Zaleski, File)

The Bears are banking on Foles — the backup quarterback who helped Philadelphia win a Super Bowl — to bounce back from an injury-riddled season with Jacksonville and at least give them another option if Mitchell Trubisky struggles again or gets hurt next year. Chicago sent a 2020 compensatory fourth-round draft pick to Jacksonville in the trade agreed to two weeks ago.

The Jaguars parted with the 31-year-old Foles just over a year after signing him to a four-year, $88 million contract that included $50.125 million guaranteed. He broke his left collarbone early in the season opener, missed the next eight games and got benched in his third game back.

The Bears also re-signed safety DeAndre Houston-Carson to a one-year contract on Tuesday.

Houston-Carson has played primarily on special teams since the Bears drafted him out of William & Mary in the sixth round in 2016. He appeared in all 16 games last season for the first time.