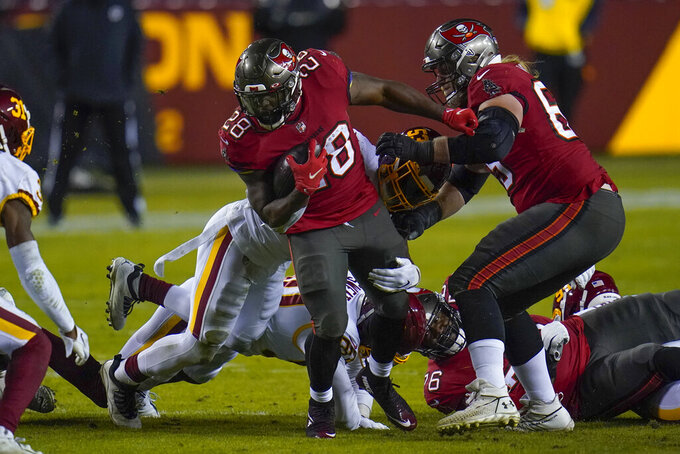 TAMPA, Fla. (AP) — When Leonard Fournette suddenly found himself out of work, one of the first people who reached out to the former Jacksonville Jaguars running back was Tom Brady.

The six-time Super Bowl-winning quarterback thought he’d be a nice addition to a talented group of playmakers being assembled around him in Tampa Bay. So, he encouraged the fourth-year pro to consider joining the Buccaneers.

“I knew I could come in and help the team out,” Fournette said, reflecting on his surprise release by the Jaguars in early September and getting an opportunity to restart his career with a team with championship aspirations.

Four months later, he has no regrets.

The Bucs (12-5) are preparing for an NFC divisional playoff matchup against the New Orleans Saints, and the fourth overall pick from the 2017 draft has embraced a supporting role in Tampa Bay’s offense after being a featured back in Jacksonville.

“Tom hit me like, ‘Man, I would love for you to come help us out.’ First thing, who wouldn’t want to play with Tom? Now that I’m here, I’ve just surrounded myself with a great group of people,” the 25-year-old running back said.

“I could have gone another route ... but I felt like it was the perfect decision for myself,” Fournette added. “It’s going very well right now, to be honest.”

A two-time 1,000-yard rusher, Fournette was a versatile every-down back who gradually fell out of favor in Jacksonville after helping the Jaguars reach the AFC championship game as a rookie.

Despite rushing for 1,152 yards and catching 76 passes for another 522 yards in 2019, the Jaguars parted ways with him last summer after attempts to trade the 6-foot, 228-pound running back failed.

The Bucs welcomed his arrival, even though they had already addressed the need for depth behind starter Ronald Jones by drafting Ke’Shawn Vaughn in the third round and signing former Pro Bowl running back LeSean McCoy in August.

“Incredible talent. You don’t see backs that big be able to move that quick and be able to get in and out of breaks, to be able to accelerate the way he does,” Saints linebacker Demario Davis said.

“They feel comfortable being able to use him in the run game and in the pass game,” Davis added. “He’s a complete back. And so, they definitely got a good one when they got him.”

The move has paid off, with the native of New Orleans who also starred at LSU rushing for 367 yards and six touchdowns and finishing with 36 receptions for 233 yards while sharing playing time with Jones during the regular season.

And although it took some time to adjust to his limited role, Fournette concedes the lighter workload kept him fresh for the playoffs.

Filling in for Jones, who sat out last week’s wild-card victory over Washington with a quad injury, Fournette rushed for 93 yards and a touchdown. He also had four receptions to 39 yards.

Another high-profile addition getting a second chance with Tampa Bay, receiver Antonio Brown, had two catches for 49 yards and a TD.

“It’s been an up and down season for me. This year tested my humbleness,” Fournette said. “Coming from being the whole offense to being a minor piece, it’s been off and on. But I just kept faith, and they believed in me. I’m happy where I’m at. I’m happy where I stand. ”