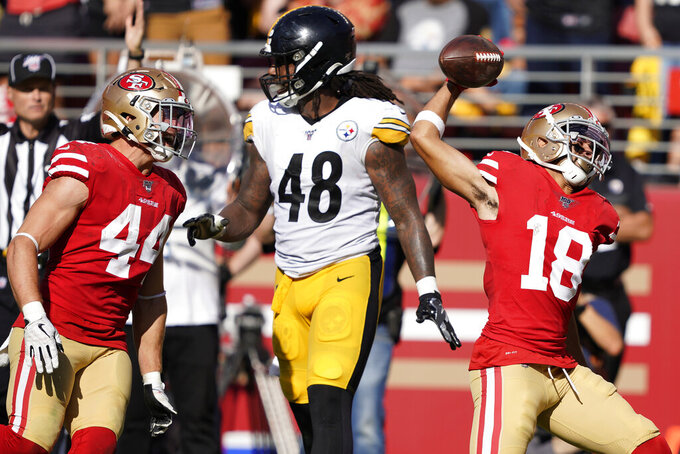 SANTA CLARA, Calif. (AP) — Dante Pettis' roller-coaster start to his second season in the NFL has led him to the end zone for the biggest touchdown of the year for the San Francisco 49ers.

Pettis came into the year expected to build on a promising rookie season to become the No. 1 receiver in San Francisco's offense. Instead, he struggled in training camp and drew public criticism from coach Kyle Shanahan, barely saw the field in the opener, wasn't targeted a single time in Week 2 and had an interception go off his hands in the first half this past week against Pittsburgh.

Despite all the lows, Shanahan and quarterback Jimmy Garoppolo still decided to go in Pettis' direction with the Niners trailing late against the Steelers. The move paid off with a 5-yard TD catch that gave the 49ers a 24-20 victory Sunday for their first 3-0 start in 21 years.

"It was good. There obviously have been a lot of ups and downs. I know that's part of sports. I've been around professional sports my whole life," said Pettis, whose father, Gary, is a former major league outfielder.

"I know what happens. You're not just going to be good every single day. Now that I know what it's like to go through that, I know I can do this. I know I'm here for a reason."

The 49ers were counting heavily on Pettis heading into this season after a strong finish to his rookie season. Pettis caught a 22-yard TD pass from Garoppolo in his NFL debut last year before struggling with knee injuries that limited him to three catches through the first nine games of the season.

But Pettis had 17 catches for 338 yards and four TDs during a four-game stretch late in the season before re-injuring his knee, showing why the Niners traded up into the second round to take him in the 2018 draft.

That success didn't carry over into this season as Pettis struggled throughout training camp, leading him to play deep into some exhibitions when most established players were already done for the night as Shanahan said he hadn't earned a starting role.

Pettis then managed to get on the field for two snaps in the opener at Tampa Bay, catching one pass for 7 yards. After a good week of practice, he got more time in Week 2 in Cincinnati but threw more passes (one) than he had thrown his way (zero) as he once again came off the bench.

"He's just gotten better each week," Shanahan said. "We all know how he finished last year. Had a few bumps in the road throughout training camp, which I think has been well documented and I talked about. But, I've been extremely impressed with how he's responded since the first week of the season. He's taken the challenge. He's been working as hard as anyone on our team."

That led to Pettis getting his first start of the season against the Steelers, although that didn't start well with the early interception off his hands and only three catches for 15 yards until the closing minutes.

Then with the game on the line, Garoppolo didn't hesitate to go in his direction when Pettis got open between two defenders at the goal line.

"Dante's phenomenal in practice," Garoppolo said. "I know you guys aren't seeing all that and everything, but he battles in practice. Great mindset of when his number's called, he's ready. You've got to appreciate a guy like that. Having all that competitiveness, you love to see it as a quarterback, because you can trust that."

NOTES: The 49ers signed long snapper Garrison Sanborn a day after Jon Condo retired. Condo played one game after Colin Holba held the job the first two weeks. Kyle Nelson will miss the next three games as part of a 10-game suspension for violating the league's policy on performance-enhancing substances. ... The Niners will take the rest of the week off for their bye before returning for two extra practices early next week ahead of a Monday night game vs. Cleveland on Oct 7.