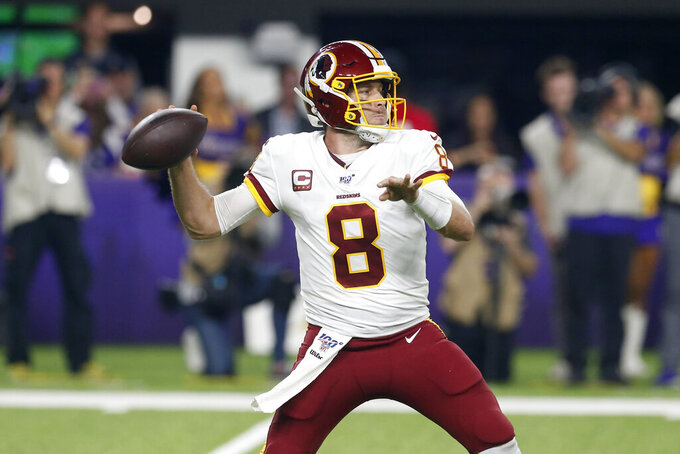 Washington Redskins quarterback Case Keenum throws a pass during the first half of an NFL football game against the Minnesota Vikings, Thursday, Oct. 24, 2019, in Minneapolis. (AP Photo/Jim Mone)

MINNEAPOLIS (AP) — When Case Keenum walked into U.S. Bank Stadium with the rest of the Washington Redskins, he took his first look around the building where his career moment in the NFL took place for the Minnesota Vikings two seasons ago.

This visit wasn't much to remember.

Keenum suffered a concussion in the second quarter and didn't play after halftime, and the Redskins offense sputtered again in a 19-9 loss to the Vikings that left them without a touchdown for the second straight game and the third time in five weeks.

The Redskins (1-7) made the announcement about Keenum, just as the second half started on Thursday night. He was sacked by nose tackle Linval Joseph on his second-to-last play, a second-down fumble late in the second quarter that Washington recovered at the Minnesota 12. Keenum threw an incompletion on the next play, and the Redskins kicked a field goal. Interim coach Bill Callahan said he believed Keenum took the hit to the head on the sack.

Because the Vikings kept the ball for the remainder of the first half, there was no clear sign that Keenum was woozy until rookie Dwayne Haskins Jr. entered on the first series of the third quarter. Haskins had a tough time. He took a sack on second-and-6 after three straight touches by Adrian Peterson gained 54 yards, and the Redskins settled for the last of three field goals by Dustin Hopkins to pull within 16-9.

The Redskins stuffed Kirk Cousins on a fourth-and-1 sneak at the Minnesota 34 to get the ball back, but two plays later Haskins overthrew Terry McLaurin and had his pass intercepted by Anthony Harris.

"I want to be confident, and I feel confident," said Haskins, who was 3 for 5 for 33 yards. "The guys believe in me. It's a process, and we've got to put a game together and win."

Keenum lost a fumble while being sacked by Danielle Hunter on Washington's first possession, but he drove the Redskins as far as the 12 and then the 3, before the Redskins had to settle for three points on each trip.

The concussion was a far less ceremonial way for Keenum's night to end than in his last game at U.S. Bank Stadium on Jan. 14, 2018, when he led the Vikings to a victory over New Orleans in an NFC divisional round playoff game. His 61-yard touchdown pass to Stefon Diggs on the final play became known as the "Minneapolis Miracle " and sent the Vikings to the NFC championship game.

Keenum was not allowed to speak to reporters, per the concussion protocol. Callahan said if Keenum is cleared he will remain the starter. The Redskins play at Buffalo next, on Nov. 3. If Keenum isn't ready yet, Haskins would start, with Colt McCoy backing him up.

"For the most part, he went in there and did his best," Callahan said. "I think he'd like to have that interception back. That was a critical part of the game. We were in a good situation. Our defense just turned the ball over on downs on a fourth-and-1 stop. It's still a seven-point game at that time, and I felt we had momentum. We had field position. It was unfortunate. I think something to learn from."