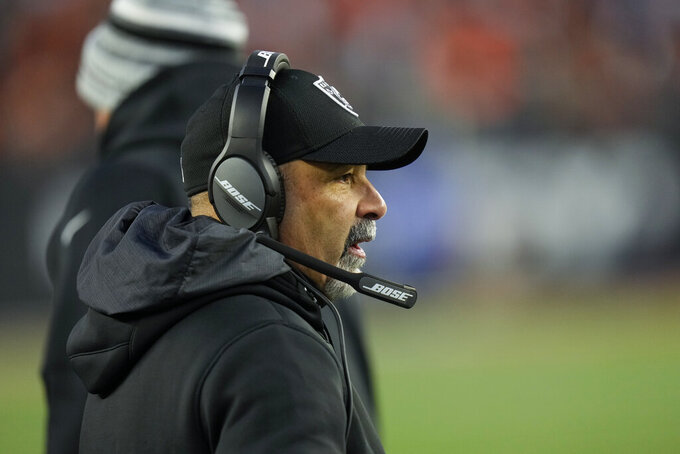 The Packers announced Tuesday that Bisaccia will joining Matt LaFleur’s staff as the team's third special teams coordinator in as many seasons. The Packers had a punt and a field goal blocked in an NFC divisional playoff loss to the San Francisco 49ers and had the NFL’s worst special teams during the regular season, according to Football Outsiders efficiency metrics.

The Packers are getting one of the league’s most respected special teams coaches in Bisaccia, who is going back to his roots after helping the Raiders reach the playoffs as interim head coach.

Bisaccia took over after the resignation of Jon Gruden and went 7-6, including the Raiders’ wild-card loss to Cincinnati. The Raiders opted against making Bisaccia their permanent head coach and instead hired New England Patriots offensive coordinator Josh McDaniels.

Even so, Bisaccia earned plenty of compliments from Raiders players for the way he kept the team together amid turmoil that included Gruden’s forced resignation over offensive emails and wide receiver Henry Ruggs III’s arrest in a deadly crash in Las Vegas.

“Rich is a great leader,” Raiders defensive end Maxx Crosby said. “One of the best people I know. One of the most honest dudes I know. I’ll go to bat for him any day of the week.”

Bisaccia has 20 seasons of special teams coordinator experience with the Raiders, Cowboys, Chargers and Buccaneers. He now has the challenge of solidifying a unit that has long been the Packers’ biggest weakness.

In a 13-7 loss at Kansas City on Nov. 7, the Packers had a field-goal attempt blocked and had a fumbled punt return that set up a Chiefs field goal. Green Bay beat the Chicago Bears 45-30 on Dec. 12 despite allowing Jakeem Grant to score on a 97-yard punt return and failing to recover an onside kick.

Things were worse in the playoffs.

The Packers led 7-0 when San Francisco’s Jimmie Ward easily got through the line and blocked Mason Crosby’s 39-yard field-goal attempt on the final play of the first half. Green Bay still led 10-3 until Jordan Willis blocked Corey Bojorquez’s punt. Talanoa Hufanga picked up the loose ball and returned it 6 yards for a game-tying touchdown with 4:41 left.

The Packers also had only 10 men on the field when San Francisco’s Robbie Gould kicked the game-winning 45-yard field goal as time expired. LaFleur blamed the error on a miscount from the coaches' box.

“San Francisco had a lot of their starters on special teams,” LaFleur said. “That’s going to be something that I want to do some studies around the league and see how many teams operate that way."

LaFleur has had to reshape his coaching staff this offseason.