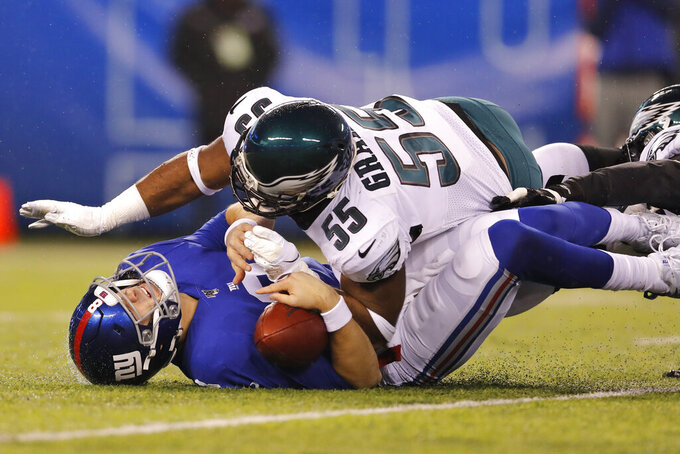 EAST RUTHERFORD, N.J. (AP) — Wearing green "The East Is Not Enough" T-shirts and division champion baseball caps, the Philadelphia Eagles showed off their dance moves in the visiting locker room after a group of backups, reserves and former practice squad players helped the team secure a playoff berth.

Boston Scott ran for three touchdowns in the second half and the injury-ravaged Eagles beat the New York Giants 34-17 on Sunday to win the NFC East title.

Carson Wentz led Philadelphia (9-7) to four straight must-wins and the team finished an elimination game without seven starters on offense.

The Eagles host Seattle (11-5) in a wild-card game next weekend.

"I don't care who it is," tight end Dallas Goedert said. "They have to come to our house and we have to protect it."

Then they lost running back Miles Sanders and three-time Pro Bowl right guard Brandon Brooks in the first half.

"You never want injuries but for these guys coming from the practice squad, the journeys they've been on, it makes it that much sweeter," Wentz said.

The Eagles are in the playoffs for the third straight season but Wentz will make his first postseason start. He was sidelined after knee surgery in 2017 when Nick Foles led Philadelphia to its first Super Bowl title. He was injured again last year when Foles took the Eagles to the divisional round.

Wentz threw for 289 yards, including a 24-yard TD pass to Perkins, who was promoted from the practice squad on Nov. 30.

Scott had TD runs of 7, 2 and 2 yards. He came off the practice squad in October. Scott had 54 yards rushing and 84 receiving.

"I just waited for my opportunity and made sure I was ready," Scott said.

While the Eagles seek another Super Bowl title, the Giants (4-12) face more uncertainty. Coach Pat Shurmur's job status is a question after going 9-23 in two seasons.

“We're not a good enough team yet to win those close games, but someday we will be," Shurmur said.

Scott turned a screen pass into a 39-yard gain, spinning and twisting his way to the 2 to set up his last touchdown that made it 34-17.

The Giants stayed close into the fourth quarter. Saquon Barkley's 68-yard TD run tied it at 17-17 in the third quarter.

But Burnett, signed by the Eagles on Dec. 10 after he was cut by the Niners and Jets, made a sliding 41-yard catch to set up Jake Elliott's 50-yard field goal that gave the Eagles a 20-17 lead in the fourth.

After Fletcher Cox scooped up Daniel Jones' fumble and ran it to the 2, Scott ran it in for a 27-17 lead.

Scott's first TD run gave Philadelphia a 17-10 lead. The Eagles started that drive at their 38 after Cre'Von LeBlanc batted down a pass on fourth down.

Jones tossed a 20-yard touchdown pass to Golden Tate to tie it at 10-10 on the opening drive of the third quarter.

Scott made a one-handed, over-the-shoulder grab on a screen pass and turned it into a 29-year gain earlier on Philadelphia's first TD drive. Wentz kept it going with a successful sneak on fourth-and-1 from the Giants 26 one play before his TD toss to Perkins.

The Eagles overcame adversity the past two seasons, losing Wentz. They've never faced injuries like this, however.

“That’s Doug and his attitude," Graham said. "Never get too high, never get too low. Control what you can control. We bought into it and now we’re wearing a hat and t-shirt and we’re in the dance.”

Wentz set a single-season franchise record with 4,039 yards passing despite not having one wide receiver reach 500 yards. Alshon Jeffery had 490, Nelson Agholor had 363 and DeSean Jackson had 159.

Sanders became the first Eagles player since Don Johnson in 1953 to lead all rookies in scrimmage yards, finishing with 1,327. He surpassed Oakland's Josh Jacobs before getting injured.

Eagles: Sanders injured his ankle. Brooks was carted off the field after suffering a shoulder injury on the first extra point. CB Avonte Maddox left with an undisclosed injury. CBs Ronald Darby and Jalen Mills already were out of the lineup.

Giants: RB Eli Penny left with a back injury in the first half.