In one year, Dolphins' defense goes from worst to 1st in NFL 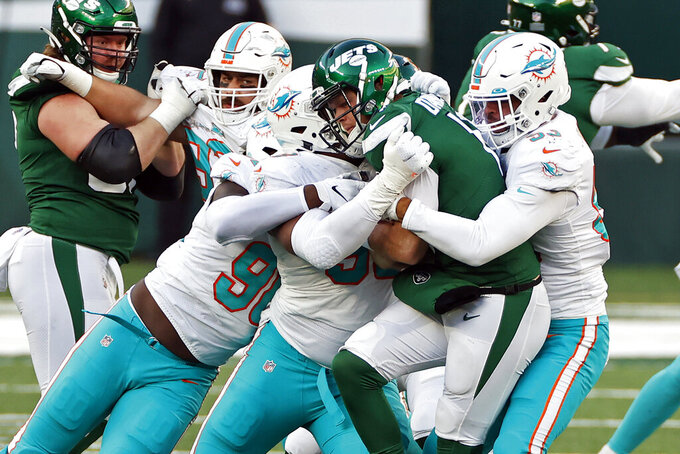 FILE - In this Nov. 29, 2020, file photo,New York Jets quarterback Sam Darnold (14) is sacked by Miami Dolphins middle linebacker Kyle Van Noy (53) with help from teammates during NFL football game in East Rutherford, N.J. In one year the Dolphins have gone from worst to first in the NFL in points allowed, raising their playoff hopes. (AP Photo/Adam Hunger, File)

MIAMI (AP) — In one year the Miami Dolphins have gone from worst to first in the NFL in points allowed, which is a big reason their playoff hopes are on the rise.

So why is cornerback Xavien Howard the Dolphins’ only Pro Bowl player?

“Miami always gets overlooked,” Howard said. “If some of the guys were on a different team, they’d get recognized. As a team, we can pick that off with a Super Bowl, and everybody will be happy.”

The Super Bowl is heady talk coming from a franchise that hasn’t won a playoff game in 20 years, and the Dolphins are probably still not-ready-for-prime-time players — in February at least.

But their improvement under second-year coach Brian Flores has been dramatic, especially on defense.

Last season the Dolphins gave up a franchise record 494 points, 30.9 per game and the most in the NFL, and went 5-11. This season they’re allowing 18.4 per game, the league’s lowest average, and are contending for an AFC wild-card berth at 9-5.

Because defense is often the best way to win on the road, especially in December, the Dolphins’ final two games — at Las Vegas and at Buffalo — don't seem quite so daunting. They probably must win both to reach the postseason for only the third time since 2001.

Flores’ defense is a blitz-loving, ball-hawking bunch that leads the league in takeaways (26) and third-down conversions (33%) but ranks near the bottom in star power. That was confirmed by this week’s Pro Bowl picks, when Miami’s lone selection was Howard, who leads the league with nine interceptions, more than nine teams.

“He’s just a guy that you can count on consistently week in and week out,” Miami defensive coordinator Josh Boyer said. “He’s really a complete player.”

But as with any good defense, the Dolphins’ success is a collective effort that includes five new starters this year: four free-agent acquisitions and second-round draft pick Raekwon Davis.

“We wanted to add the right people — guys who are tough and smart and competitive and team-first,” Flores said. “With every addition, we have that in mind.”

Safety Bobby McCain has been with the Dolphins since 2015, which gives him seniority on the defense and a unique perspective on this year’s transformation.

“We’ve got 11 guys who want to do their job well and play for each other,” McCain said. “That’s one of the biggest things — understanding that we’re a family, not just a football team. We have a lot of guys who are being selfless, just doing what they’re supposed to do and having fun doing it.”

McCain is part of a secondary that has allowed only 16 touchdown passes, second fewest in the NFL, after getting torched for a league-high 39 in 2019.

Sacks have increased to 37 from a league-low 23 last year. And the Dolphins’ streak of at least one takeaway in 20 consecutive games is the NFL’s longest.

“It’s just playing hard, just all effort,” the 330-pound Davis said. “It’s not a secret, not a scheme, not a play. It’s just chasing the ball down, getting to the ball and getting the ball.”

Davis' teammates echo that attitude, a reflection of a unit that may be low on big names but is also low on ego.

The disruptive nature of the defense diminishes the significance of some statistics. The Dolphins rank in the bottom half of the league in yards allowed rushing, passing and overall. They’ve been outgained by 426 yards, but are tied for the fifth-best point differential.