Patriots have much to clean up with Chiefs up next 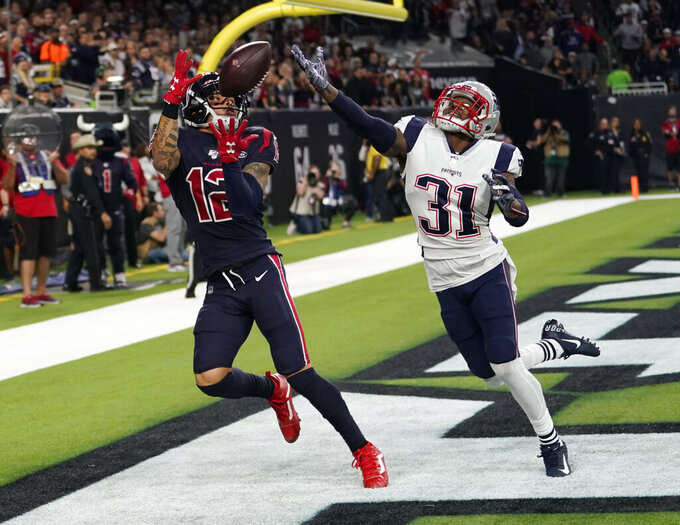 Houston Texans wide receiver Kenny Stills (12) pulls in a pass in front of New England Patriots cornerback Jonathan Jones (31) for a touchdown during the second half of an NFL football game Sunday, Dec. 1, 2019, in Houston. (AP Photo/David J. Phillip)

FOXBOROUGH, Mass. (AP) — Issues on offense have been a recurring theme for the Patriots this season.

The saving grace has been a defense that put up historic numbers in guiding New England to an 8-0 start.

But for the second time in four games an opponent found a way to score points against that once imposing unit.

The latest setback, a 28-22 loss to Houston on Sunday, cost New England its place as the sole leader atop the AFC. It’s left the Patriots with much to clean up on both sides of the ball as they prepare to host Kansas City in a rematch of last season’s AFC championship game.

New England’s defense entered Sunday allowing a league-low 10.6 points per game and leading the NFL with 29 total takeaways. It had also allowed only four passing touchdowns through 11 games.

The Patriots (10-2) didn’t force a turnover on Sunday, while the Texans accounted for four passing scores. The passing TDs were the most that New England has given up since it surrendered three in a Week 14 loss at Miami last season.

Meanwhile, the Patriots are going through their roughest stretch this season on offense.

The Jets, Dolphins, Broncos rank in the bottom five in points per game in 2019 but are all averaging more points than New England (18 ppg) since the start of November. Quarterback Tom Brady’s 88.2 passer rating is his lowest since 2013.

The Patriots remain in first place in the AFC East and are tied with Baltimore for the conference’s best record. But if both teams end the season with the same record, the Ravens would get the top seed in the playoffs by virtue of their win over New England on Nov. 3.

Safety Devin McCourty liked the fight the team showed late against Houston after finding itself trailing 21-3 in the third quarter. But he said it means nothing without a victory.

During his weekly appearance on WEEI radio on Monday, Brady acknowledged that there must be better consistency on offense but said expectations must also be realistic for a group that’s already faced a lot of adversity.

“We not 2-10. We’re 10-2,” Brady said. “The expectations for our team often are at a very high level and I understand that. But at the same time, I think there’s realistic expectations with our circumstances, incorporating different elements and players and injuries. And we're just trying to do the best that we can do.”

New England got some help from a passive Texans defense in the fourth quarter, but the Patriots did look good in their final two offensive drives of the night. Despite starting with the ball on the 25- and 6-yardline, Brady led New England to a pair of touchdowns to give the Patriots a chance at a comeback.

The Patriots younger receivers were guilty of poor route running on multiple occasions, causing Brady to openly display his frustration on the sideline. With teams now using double teams on receiver Julian Edelman and running back James White, better precision by younger players like Phillip Dorsett, Jakobi Meyers and N’Keal Harry will be imperative for Brady to be able to spread the ball around.

While White was well-covered for most of the night, he managed to lead the team with eight catches for 98 yards and two touchdowns. He also ran for a team high 79 yards on 14 carries. The 177 scrimmage yards is a new career high.

The veteran was released Monday after a mediocre debut Sunday. He connected on a 23-yard field goal but went 1 for 2 on extra points. Forbath was signed late last week to replace Nick Folk, who had to undergo an emergency appendectomy.

Brady has now gone seven straight games with a passer rating below 100. That’s the longest streak of his career.

The Patriots won two shootouts with the Chiefs last season, using a last-second field goal to beat them 43-40 during the regular season and then needed overtime to post a 37-31 victory in the AFC title game. Kansas City is just as explosive this season averaging 29 points per game, which ranks third in the NFL.