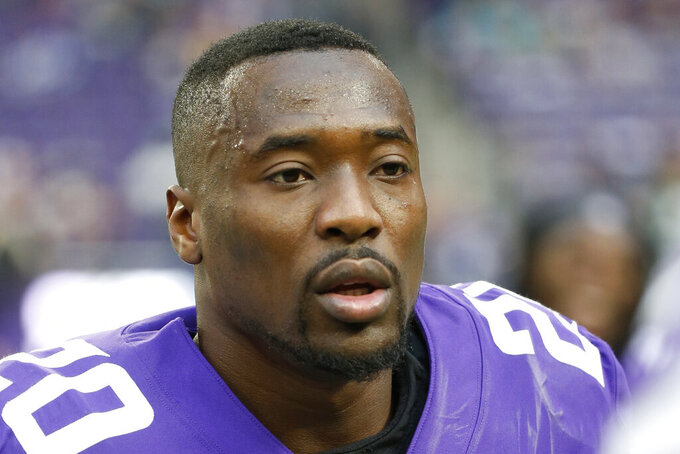 Jean Alexandre, 65, was reported to be in good health and will be reunited with this family, the Okeechobee County Sheriff's Office said in a Twitter post Thursday morning. He walked up to the ranger station at the Kissimmee Prairie Preserve State Park, which is about 25 miles (40 kilometers) north of Okeechobee in central Florida.

His son, cornerback Mackensie Alexander, was jailed Wednesday on a misdemeanor battery charge after deputies say he beat up a man shortly after returning to Florida to help search for his missing father.

Alexander, 26, and another man, 28-year-old Evins Clement, were arrested by Collier County sheriff’s deputies Tuesday night. Alexander grew up in the small farming community of Immokalee, in southwest Florida, where his family still lives. Bail for both men was set at $2,000 each, and they were both released Wednesday.

“Mr. Alexander’s only concern is the well-being of his father,” the men’s attorney, Brian Pakett, said Wednesday.

Alexander had left Bengals training camp earlier Tuesday to assist in the search.

According to a missing person’s report released Wednesday, Mauricet Etienne, 56, told investigators that after several hours of picking, he could not find Alexandre and spent three hours searching for him before returning to Immokalee to pick up Alexandre’s wife, Marie. They returned to Okeechobee County, where they searched for another 45 minutes before heading back to Immokalee and calling deputies.

Etienne told investigators he has no ill will toward Alexandre and he agreed he should have called law enforcement when he first discovered him missing. But he said he was afraid because he had been previously told by deputies that he did not have permission to pick berries in that area.

The arrest report for the Alexander said he and Clement had gone to the home of the man he’s accused of assaulting “to discuss a previous incident.” Collier County sheriff’s officials declined to say if the man is Etienne, citing a Florida law that shields the names of crime victims. But in a redacted recording of a call, the victim’s son made to deputies from his own home, he said his father’s attackers are angry because they think he is responsible for a man who had gone missing Monday.

The report says Alexander tried to convince the man to go with them, but he refused, saying he was scared of retaliation. The man told deputies Alexander then threatened to get a gun from his car. When he still refused to go with them, the victim said Clement grabbed him and Alexander began punching him in the face.

Deputies said the victim suffered a cut lip and forehead.

In 2016, ESPN made a documentary about Alexander and his family, “Gift from the Groves,” about his life growing up in Immokalee. His parents worked as pickers in the orange, squash and pepper fields for $300 a week combined. When Alexander and his twin bother, Mackenro, turned 10, they also began picking oranges on weekends.

“We are aware of the situation. We have no further comment at this time,” the Bengals said in a statement Wednesday.